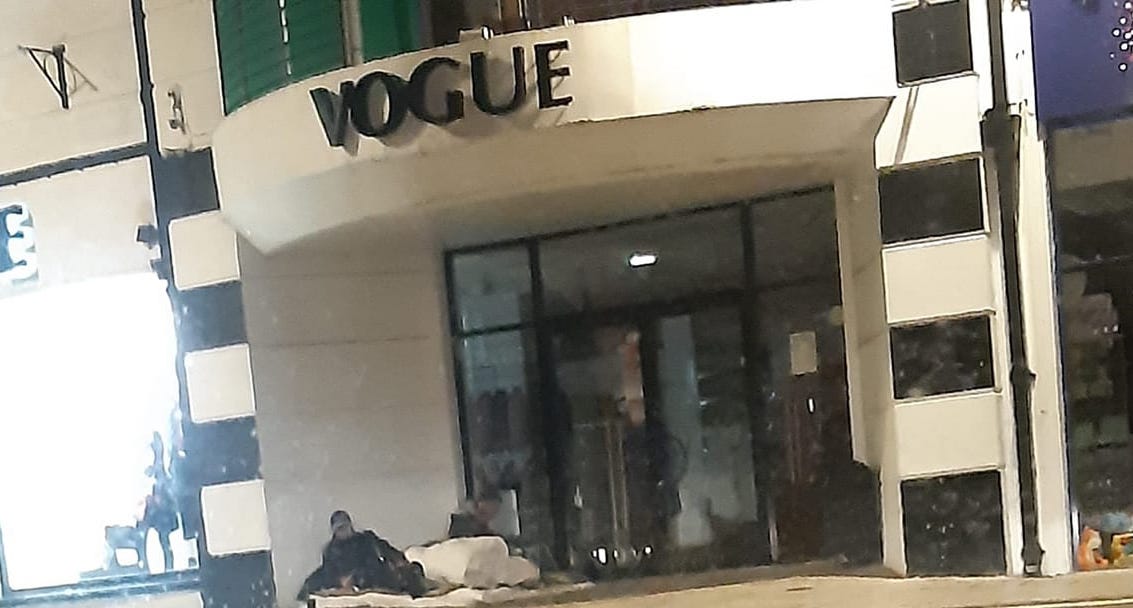 Homelessness can be a deep-rooted and visceral issue, not often visibly seen on the streets, but when it becomes as apparent as it did in Armagh City Centre on Tuesday night, it’s perhaps time to sit up and take notice.

This photo (main image) raised a lot of questions on social media over the last 24 hours.

When we think of homelessness and individuals sleeping rough, we often think of large towns and cities…..not Armagh.

However, one local woman was shocked by the sombre sight of people taking cover in the doorway of a shop on Scotch Street.

Taking to social media, Danica Davis described the idea of people being left without a roof over their head in 2021 as a “disgrace”.

In a post accompanying the photo, she wrote: “Driving through Armagh town centre and to find people sleeping on our streets really hits the heart. What is going on? This isn’t the first and I’m sure it won’t be the last – our communities are being let down.

“Election time is coming up, plenty of money spent on posters and campaigning.. but what’s being done about this?”

And addressing the recent High Street Voucher scheme, Danica commented: “£100 can’t pay rent. £100 can’t keep a house. £100 can’t feed a family for long. £100 can’t help the depression, the stress, the anxiety of just trying to live, to provide for loved ones!!!

“Expenses increasing, allowances decreasing. £100 voucher being used as a distraction – to try get people to forget. A sticky plaster to hide the reality of the society we are living in.”

Danica added: “People need to speak out. We can’t just allow ourselves to walk past and ignore this because it’s not us.. someday it might be! Fixing the odd road and pothole – there’ll be a nice smooth surface for us all to put our blankets…if we are lucky!”

Speaking to Armagh I, a spokesperson for the Simon Community said their local team were aware of the individuals and had made contact with the Housing Executive.

“Generally our approach would be that they are referred to the Housing Executive and that has happened today, so they have been to our project, where they got a shower, cup of tea and something to eat.”

The advice from the Simon Community is, if it is safe to do so, encourage those sleeping rough to get in contact with the local Housing Executive in order to register as homeless.

The charity state that they do not normally work with rough sleepers and take their referrals from the Housing Executive.

Speaking about homelessness in the district, the spokesperson said: “Belfast and Derry are used to it but the Christmas before last it started to filter into Newry.

“Some of our staff had been working in there for over 20 years and to them, for it to be in Newry, it was new thing. We know that there is a lot of hidden homelessness but hopefully this is not a spike and just a little pocket in Armagh.”

Sinn Féin Councillor Garath Keating told Armagh I that party colleague Darren McNally had stopped by to speak with the two males and offer them food.

“I have been speaking with Housing Executive to see what can be done,” said Councillor Keating, “and I will be calling down this evening to see what assistance can be offered and how they have fallen through the cracks.

“It is chilling and horrific to see people with no alternative respite but to live outside as we come into the autumn and winter months.”

He continued: “I think it highlights the reality that statistics show you are never more than around five paychecks away from potential homelessness.

“From speaking with staff at the Housing Executive, some of whom have worked there for 20 years plus, there has never been more pressure on social housing, with a shortage of homes and more people than ever trying to get social housing.”

Pointing to one silver lining, the councillor commented that the reaction from the people of Armagh demonstrated their “generosity of spirit”.

“I know how community orientated the people of Armagh are and this really has struck a chord with them as they try to find a way to respond,” he said.

“Homelessness is an unfortunate issue for our society. In this day and age there is no reason in a region, which is relatively affable, for someone not to have a roof over their head.”

Ulster Unionist councillor for the area, Sam Nicholson told Armagh I: “I lived in London and have seen the extent of homelessness there. It is quite worrying to see it in our own borough.

“We don’t know the full circumstances which led to these men living on the streets and that would be important to ascertain before making a judgement.”

He added: “It is the responsibility of the Housing Executive to provide emergency housing, but there is an issue with social housing in all areas with demand well outweighing what is available.

“This is a matter which needs to be address by the Executive with a proper social housing strategy but it is not for us as a council to shirk responsibility.”

According to ‘The Homelessness Monitor: Northern Ireland 2020’ report, funded by Crisis and the Joseph Rowntree Foundation, the “perceived rise” in rough sleeping in the country is partly related to a visible increase in “street activity” including street begging and street drinking.

However, the report does concede that given the lack of any historical series it is difficult to judge whether rough sleeping in Northern Ireland is changing in scale in any sustained way.

From street count data in Belfast, Derry/Londonderry and Newry, as well as estimates for other areas in November 2018, the Northern Ireland Housing Executive put the most recent figure for the number of rough sleepers across the jurisdiction at 38.

Sixteen of these were in Belfast, which represented an increase of five from the previous year.

The report stated: “Nonetheless, enumerated rough sleeping in Northern Ireland remains relatively small in scale compared with other parts of the UK and with the Republic of Ireland.

“However, as elsewhere in the UK, independent sources of evidence suggest that the overall scale of rough sleeping in Northern Ireland is substantially greater than indicated by official street counts.”