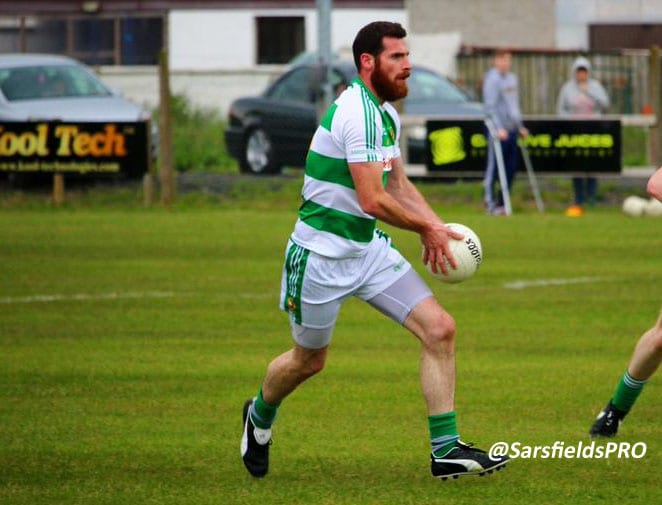 Maghery and Crossmaglen have shared the Armagh Senior League title for a number of years now and there was very little between the sides when they met on Sunday afternoon.

Crossmaglen got the better start to the match scoring three unanswered points and a goal within the first 10 minutes of the game.

Eventually Maghery found their stride and had a very strong 15 minutes pushing Cross’ back, and with Seamus Forker starting the scoring followed by three points from Conor Mackle.

The hosts almost went level until Cross’ finished the half well with two quick points before the whistle. Half-time: Maghery 0-5 Crossmaglen 1-6.

With four points to make up Maghery came out flying with an exceptional point from Seamus Forker.

Crossmaglen quickly answered back with a point of their own before Maghery found terrific form and for around 10 minutes keep the visitors off the scoreboard and levelled the game with points from Forker, Johnny Montgomery, Conor Mackle and Ciaran Lappin.

Maghery really looked like they were dominating the match but in the last 10 minutes Crossmaglen upped their game and retained possession.

They took their chances well and it just wasn’t there in the end for the Maghery men who eventually lost by four.

Maghery have another tough task next week when they travel to St Patrick’s Cullyhanna while Crossmaglen host Pearse Og.

Cullyhanna registered their fifth successive league victory last Sunday afternoon with an away victory against Dromintee that was more closely contested than the eventual scoreline suggested.

St Pat’s made the brighter start in a game played in blustery conditions which really favoured neither side. Tony Donnelly opened the scoring with a pointed free after only a minute while Aidan Nugent registered the first point from play with an excellent effort from the left wing having been released by a quick Connor Nugent free.

Aidan Nugent grabbed the game by the scruff of the neck midway through the first half, kicking two points of the highest quality from distance while Dromintee managed their first score with a pointed free 16 minutes into the tie.

Aidan Nugent restored the five point Cullyhanna lead when he fired over seven minutes before the break but the home side had the final say in the half, pointing another free to leave St Pat’s 0-5 to 0-2 clear at half-time.

Cullyhanna had the perfect start to the second half when Aidan Nugent bore down on goal with menace before evading the goalkeeper with style and tapping to the net. Six points to the good, St Pat’s set out establishing a game winning advantage with an incisive passing move which involved Gary McCooey and Connor Nugent resulting in a fine Mal Mackin point.

When Tony Donnelly landed a superb point from long range eight minutes into the half, it seemed as though the 8 point advantage would see the visitors to victory comfortably. However Dromintee had different ideas and changed the complexion of the match inside a minute with a superbly struck goal and an excellent point to cut the deficit in half.

But that was to be as good as it got for the home side who squandered a number of opportunities to really place their opposition under severe pressure.

The result was put beyond doubt 12 minutes from time when Phelim McArdle perfectly timed his run to palm a dropping ball to the net. That second Cullyhanna goal finished the game as a contest but there was still time for Tony Donnelly to point a free and Mal Mackin to fist the final score over the bar as St Patrick’s ran out nine point victors.

This was a fairly convincing triumph in a match played however it should be noted that the final margin would have much tighter had Dromintee successfully converted a reasonable proportion of their opportunities.

In difficult conditions, Sean Og Irwin and Gary McCooey excelled in defence while Aidan Nugent was again the star of show up front, ably assisted by Tony Donnelly.

The recent run of victories has propelled Cullyhanna into contention at the head of the league table however their title credentials will face a stiff examination with the visit of Maghery next Sunday afternoon.

Annaghmore took a giant leap towards safety following a last gasp winner at home to Granemore on Sunday afternoon.

The hosts trailed by seven points to three at the break but rallied early in the second half with a goal and a point to put them one to the good.

The sides traded a couple of points each before Granemore’s Jason O’Neill had a free controversially ruled out by the referee.

A personal haul of 0-7 from Christopher O’Connor wasn’t enough for the visitors as a free with the last kick of the game was enough to give Annaghmore all two points which now puts them three clear of Carrickcruppen in the relegation zone.

Elsewhere, Sarsfields kept up their impressive season with a 2-14 to 1-10 victory over relegation-threatened Killeavy.

Forkhill claimed a massive two points with a 1-14 to 1-11 victory away to Carrickcruppen. The win takes new boys Forkhill five points clear of the Camlough men who currently occupy the last relegation position.

Ballymacnab put their recent dip in form behind them with an impressive 3-7 to 1-6 win over Armagh Harps. The ‘Nab sit in sixth but only one point off the top five who all have 14 points.

On Friday night, Tir na nOg could well have consigned St Paul’s to Intermediate football next year with a vital 1-12 to 1-10 victory. The result takes the Portadown men above Carrickcruppen and one point clear of the dropzone. St Paul’s remain the only team in the league without a victory.

Dorsey were the visitors to Mullaghbawn on a blustery afternoon for football. Playing with the wind in the first half, Mullaghbawn controlled the opening stages, notching a few points on the board before Dorsey opened their account.

A super long distance score from Mullaghbawn left it 4 points to 1 with 15 minutes played. A skilful point from our corner forward, who was close to the end line and under pressure from two opposition players was another highlight of the first half.

The teams went in at the break with the score Mullaghbawn 0.08 -v- 0.02 Dorsey. The first ten minutes of the second half was competitive with neither team dominating. Both sides landed a few points before a rasping shot hit the net for Mullaghbawn to put them 1.03 to the good.

The opposition keeper completed a hat trick of one-on-one saves to keep his side’s hopes alive with ten minutes to play. Dorsey did close the gap but truthfully the game was never really in doubt.

A goal and a point for the visitors in injury time reduced the margin to four points, with the final score Mullaghbawn 1.12 -v- 1.08 Dorsey. Middletown at home next Sunday @2pm is the next fixture. The Reserves lost to Carrickcruppen on Wednesday and have no game fixed for this week.

Elsewhere, Silverbridge dented the Grange’s assault on the Intermediate League with a 2-10 to 0-12 victory.

Whitecross had a mixed weekend and missed the chance to go top outright when they lost 1-8 to 1-11 away to Eire Og on Friday night. However, they made amends with a 0-15 to 1-7 victory over Clan na Gael on Sunday afternoon. The victory for Eire Og gives them a bit of breathing space in the fight against relegation while neighbours Clan na Gael continue to struggle – sitting just a point above Keady who have two games in hand.

Shane O’Neill’s kept their promotion challenge alive with a five point win (1-12 – 0-10) victory over Collegeland – who remain in real danger.

Clann Eireann remain joint top with an impressive derby win at home to St Peter’s (3-9 – 2-8). That’s two wins on the bounce now for the Lurgan men, while St Peter’s will be hoping to pick up another few points to make sure of safety.

An Port Mor and Culloville played out a draw as both teams vie for promotion (0-11 to 1-8).

The Junior A League continues to thrill as Clonmore closed the gap on Belleek just above them with a narrow 0-14 to 0-13 away win.

Ballyhegan also picked up two points with a 0-15 to 1-10 victory away to Crossmaglen IIs.

Junior B league leaders Clady took a trip to Dromintee on Friday evening and maintained their unbeaten record with a hard fought victory.

Dromintee opened the scoring on their first attack but Stephen Gallogly soon levelled things up. Clady’s first point helped them get into the swing of things – and points from Sean Smith and Malachy McGeown gave them an early lead.

Paul Sweeney widened the margin with a fine goal midway through the first half. Clady’s half forward run straight at the Dromintee defence shrugging of challenges and dummying his way past the opposition before smashing the ball into the top left corner of the goal.

Clady were looking strong, with the Leanord’s helping them handle any sticky situation that came their way. The visitors went in at the break well-worth their four point lead.

There was a quiet opening to the second half, but Dromintee hit another level after the 40th minute and came at Clady quite strong – clocking over consecutive points. Clady got a real scare when a defensive mix up allowed Dromintee’s corner forward stray in to a danger zone and fist the ball into the net.

The deficit was reduced to just one single point – Dromintee didn’t stop, they rallied at Clady and really should have levelled the game when a 20 yard free kick was screwed wide.

That was a miss they went on to regret. Within minutes Clady doubled their advantage – Hugh McSorely knocking over a 45. A long range score from Ion Hughes and a fisted point from the impressive Paul Sweeney took all the pressure off Sean South’s.

The game was wrapped up when Clady’s main man on the night, Malachy McGeown, lofted over a wonderful free kick from a difficult angle. Clady will now take on Cullyhanna II on June 30, a game that will prove decisive in the fight for the Junior B league title.

Elsewhere, Killeavy IIs beat O’Hanlons 3-16 to 2-14 on Friday night. Killeavy also picked up another two points on Sunday with a 3-15 to 1-6 victory over Clann Eireann II.