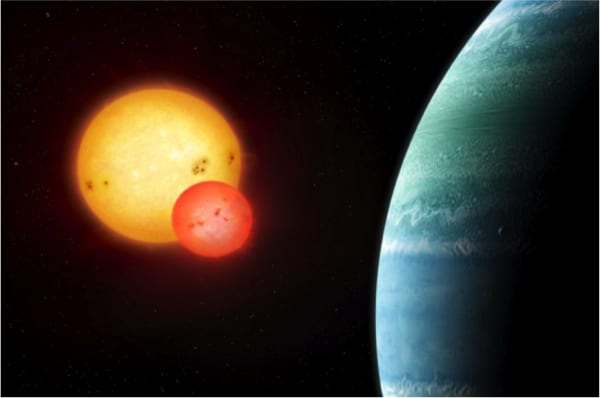 Astronomers from Armagh Observatory are among an international team who have been involved in the discovery of a planet orbiting a rare double star.

And it has been described as simiar to the fictional planet Tatooine in the Star Wars movies.

It lies in the ‘Goldilocks’ zone and it is only the 10th double-star solar system identified to date by means of using data from the Kepler satellite, which orbits earth, and just the third with a planet in the habitable zone.

Astronomers at the 29th International Astronomical Union General Assembly in Honolulu, Hawaii, announced the discovery of the transiting ‘circumbinary’ planet, a result that brings the number of such known planets into double digits.

A circumbinary planet orbits two stars, and like the fictional planet ‘Tatooine’ from Star Wars, the planet has two suns in its sky.

The discovery marks an important milestone and comes only four years after the first Kepler circumbinary planet was detected.

Once thought to be rare or even impossible, these 10 discoveries confirm that such planets are common in our galaxy. The research was published in the Astrophysical Journal. (http://iopscience.iop.org/0004-637X/809/1/26/article).

Kepler is a space observatory launched by NASA with the primary mission to discover Earth-like planets orbiting other stars.

If a planet happens to pass directly in front of the star, a phenomenon called a ‘transit’, there is a slight but detectable diminution in the light received from the star, and the periodic repetition of such dips in the star’s brightness can be used to infer the presence of a planet and determine its properties.

The 10th circumbinary planet, known as Kepler-453b, also presented astronomers with a surprising twist – the tilt of the orbit of the planet rapidly changes owing to the gravitational field of the two suns, making transits visible only nine percent of the time.

“The detection was a lucky catch for Kepler,” said William Welsh, professor of astronomy at San Diego State University and lead author of the study. “Most of the time, transits would not be visible from Earth’s vantage point.”

The change in the orientation of the planet’s orbital plane, known as precession, brought it into proper alignment halfway through the space telescope’s lifetime, allowing three transits to be observed before the end of the mission.

“The low probability for witnessing transits means that for every system like Kepler-453 we see, there are likely to be 11 times as many that we don’t see,” added co-author Jerome Orosz, also a professor of astronomy at San Diego State University.

The precession period is estimated to be approximately 103 years. The next set of transits won’t be visible again from Earth until the year 2066.

Kepler-453b is the third Kepler circumbinary planet found to lie in the habitable zone of its host pair of stars. The astonishingly high rate of occurrence of planets in the habitable zone is caused by the types of stars observed by Kepler (generally Sun-like) and the need for the planet to be sufficiently far from the stars for its orbit to be stable. In a binary star system, the habitable zone is more complex than around a single star, but it can be readily calculated once astronomers know the masses, radii, and temperatures of the stars.

However, Kepler-453b is a gas-giant planet and is unlikely to harbour life as we know it.

Tobias C. Hinse, a former PhD student at Armagh Observatory and now a postdoctoral research fellow at the Korea Astronomy and Space Science Institute (KASI), and Research Associate at Armagh and co-author of this study, said “Our orbital stability calculations of the planet focused on the chaotic properties of its orbit, and were carried out using large-scale computing facilities in both the UK and Ireland and the Republic of Korea.

“Although its orbit varies in inclination with respect to the orbital plane of the two central stars, it is sufficiently far away from both of them that it is to some extent protected from leaving the habitable zone that it currently occupies.”

He continued: “This planet is in luck, since disturbances in its orbit caused by the two central stars might have resulted in unstable behaviour, possibly ejecting the planet out of the system entirely, in which case the planet would have become a so-called ‘free floater’ – an orphan planet orbiting the Galaxy with no parent star.”

Although this planet lies in the habitable zone of the twin-star system, it is unlikely that life could have managed to develop on its surface, given that the planet’s properties appear more closely to resemble those of Jupiter, Saturn, Uranus or Neptune in our solar system, rather than Earth.

However, as in our solar system, it is an interesting question whether such a planet might have rocky satellites or moons orbiting around it, one of which might host a more suitable environment for the evolution of life.  If such a satellite exists, it would however be too small to be detectable with current techniques.

Based on the amount of starlight blocked during the transits, the team deduced that Kepler-453b has a radius 6.2 times greater than that of the Earth. The mass of the planet was not measurable with the current data, but is likely to be less than 16 times that of the Earth.

The system is in the direction of the constellation Lyra, some 1,400 light-years away, and is estimated to be between 1 and 2 billion years old, about one third the age of our solar system.

With the number of known circumbinary planets now at ten, astronomers can begin to compare different systems and look for trends. The circumbinary systems tend to be very compact and come in a wide range of configurations.

“The diversity and complexity of these circumbinary systems are wonderful”, Welsh said. “Each new circumbinary planet is a gem, revealing something unexpected and challenging.”

And their tendency to be in the habitable zone is a bonus, spurring astronomers to keep searching for Earth-size circumbinary planets in the Kepler archive.

The discovery was made possible by NASA’s Kepler Mission, whose precision and long-term monitoring of the same set of stars made it an ideal planet-discovery telescope.

Although the Kepler mission formally ended in 2012, the space telescope continues to collect data for other astrophysical projects as the K2 Mission. The data archive of the Kepler telescope will keep astronomers busy for years.

Funding and facilities to support this work were provided in part by NASA, the National Science Foundation, KASI and the Department of Culture, Arts and Leisure for Northern Ireland.

The illustration is provided by kind permission of Mark Garlick (http://www.markgarlick.com)