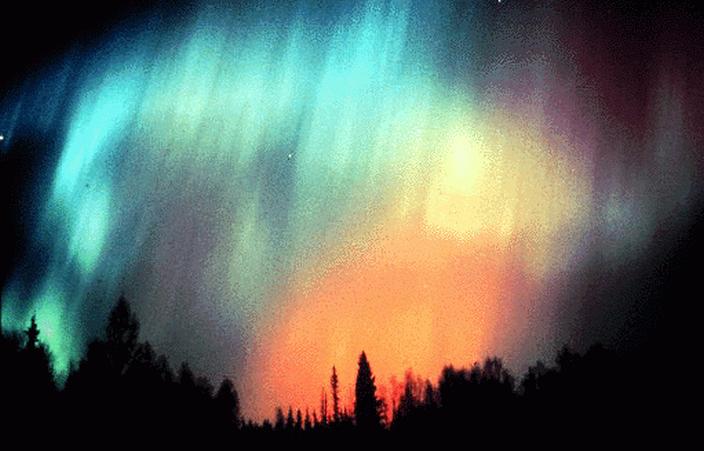 The sky above a nearby ‘failed star’ or brown dwarf lying in the summer constellation Lyra shimmers with a beautiful green and yellow aurora – 10,000 times brighter than the northern lights!

And an Armagh astronomer is one of an international group to make the discovery.

Professor Gerry Doyle, of Armagh Observatory, says this is the first confirmed detection of an aurora on a body outside the solar system – and the most powerful such event ever recorded!

The group detected the celestial display when they trained some of the world’s most powerful optical and radio telescopes on an extremely faint, cool object just 18.5 light years from our solar system.

The ‘failed star’ has a relatively low surface temperature compared with normal stars, around 2,600 degrees Kelvin or about half that of our Sun.  It has a mass close to 80 times that of the largest planet, Jupiter, in our solar system, or 12 times less than that of the Sun, and yet it has a diameter of around 160,000 kilometres, which is slightly larger than Jupiter and only 12 times bigger than our Earth.

The group observed this fascinating object using both radio and optical telescopes: the Very Large Array, which is a radio telescope in New Mexico; the 5.1 metre Hale Telescope at Palomar Observatory in California; and the 10 metre Keck telescope in Hawaii

On Earth, an aurora is driven by high-energy particles that stream from the Sun into the Earth’s magnetic field, which channels them towards the Earth’s polar regions where they slam into atoms in the upper atmosphere to produce the characteristic streaks of green, red and yellow associated with the Northern Lights.

Similar displays are seen on other planets, such as Jupiter, where gases from its moon, Io, drive the emission.

In the case of the brown dwarf, it appears that high-energy electrons are producing the aurora in the object’s upper atmosphere, whilst also producing an observed surface feature dominated by hydrogen emission with a glow redder than the eye can see and with a temperature of around 2,200 degrees K.

The project started some 12 years ago in a little pub in Galway!

It followed a conversation between Professor Doyle and Dr Aaron Golden, previously at the University of Galway but now at Yeshina University, New York.

Even a few years ago, brown dwarfs were thought by most astronomers to be incapable of emitting any significant radio emission, so its first detection came as a great surprise.

Today there are several groups worldwide involved in this subject and further study of these ‘runts’ among stars can be expected to yield vital clues to help solve one of the newest conundrums in stellar astrophysics, that is, the origin of powerful radio emission from the most massive planets, cool stars and brown dwarfs.