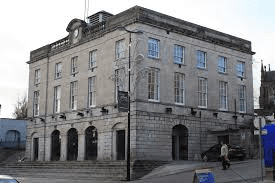 Roads Service has said it is awaiting full details from the PSNI of an accident at Market Street in Armagh before deciding on calls to lower the speed limit for traffic there.

It was responding to calls made by UUP Councillor Sylvia McRoberts and said it would receive full details from the PSNI when their investigations were complete.  This would allow Roads Service to establish the cause of the recent collision, in which a pedestrian was struck, and where appropriate provide measures to prevent it happening again.

An official told Armagh Council’s Public Services Scrutiny Committee that the Department’s speed management policy encouraged the roll out of 20mph zones and 20mph speed limits in residential areas and locations where high numbers of vulnerable road users, such as pedestrians, children and cyclists, were present.

The Northern Ireland Road Safety Strategy to 2020 contained ‘Action Measures’ which were consistent with the Department’s policy.

At present there were four proposed pilot 20mph speed limits in each of Roads Service’s four operational divisions. The scheme selected for the Southern Division would be in the Ballynahinch area, as the site already had low average vehicle speeds.

Once the Department and PSNI had completed their analysis of the pilot schemes, and if they were deemed to be successful in reducing speeds, there would be an impetus for further roll out across the rest of Northern Ireland, including the Armagh City and District area, the official reported.

With regard to market traders and customers’ safety, it had been noted that the traders’ market stalls were erected very close to the road edge with the result that often customers had to walk along the road to view the items for sale or to make a purchase.

Roads Service suggested that Council discusses this issue with the traders and arrange for them to move further back towards the Library, in that way leaving a clear area between the stalls and the roadway for pedestrians and customers.