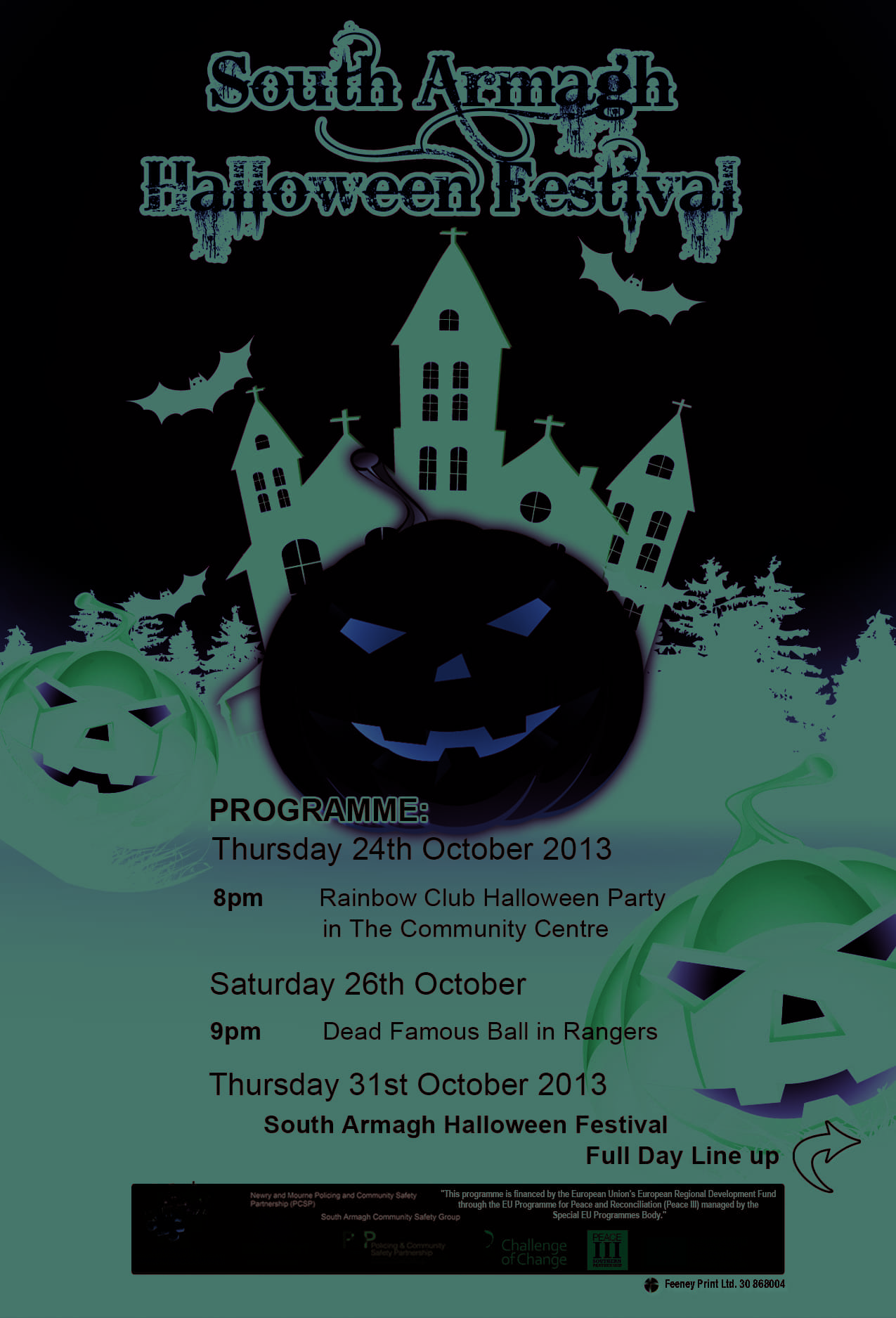 Witches and wizards from across the globe gathered at Anamar Primary School, South Armagh on Thursday 17thOctober to launch this year’s South Armagh Halloween Festival.

They were assisted by the local Anamar schoolchildren and principle Anna Sheilds, many local councillors and members of the Halloween Festival Committee.    Now in its fourth year, the festival has gone from strength to strength and is a permanent fixture on the calendar of events for people from the area.

On the spooky day itself, 31st October all roads lead toCrossmaglen where Kevin McAllister from Q Radio will be broadcasting events live from The Square.   The festival will open at 11.30am and organisers say that this year’s entertainment is sure to outshine any previous festivals.  Thebiggest bouncy castle in Europe will be in The Square all day long, the popular Spooky Tunnel from previous years will be at St Oliver Plunkett Youth Club, The Cross Square Hotel will be the venue for numerous activities such as a Punch and JudyShow and Face Painting while children can go to Crossmaglen Community Centre to see the fabulous Tommy Trickster in operation.

There are a number of new attractions this year such as Phil’sFarm (as seen on TV) and a Variety Market all day long onO’Fiaich Square and an open air spooky film at 5.30pm inCrossmaglen Rangers Football ground. There will also be a Halloween Marquee in the Square where children can go to have their very own pumpkin carved.

The finale of the day as ever will be a massive fireworksdisplay at Crossmaglen Rangers GFC at 7.30pm, followed by a fancy dress parade from The Rangers to The Square, where people will be entertained by a Chinese Dragon and FireEaters.  Musical entertainment by the renowned Fuzzy Burgers will follow.

Halloween Festival committee member Councillor Terry Hearty has commended the efforts made by all those involved in the festival saying,

“The South Armagh Halloween Festival is the largest community festival of the year in South Armagh.  The fact that the festival is getting bigger and better each year is a tribute to those who give up their time to organise it and to those who help on the day.

“It is truly a community effort as many community groups and local businesses are involved in preparations for the big day.  The local Fire Service, Crossmaglen Rangers and Crossmaglen Community Association are just some of the groups who come on board and without their support the festival simply wouldn’t happen.

“Much of the funding for the festival comes from Newry & Mourne Council’s Policing & Community Safety Partnership and this contribution has made a huge difference to the Halloween experience of many living in South Armagh.  I would like to thank Newry & Mourne Council for their continued support.

“I hope that all of the local children enjoy this year’s festival and have a very Happy Halloween.”