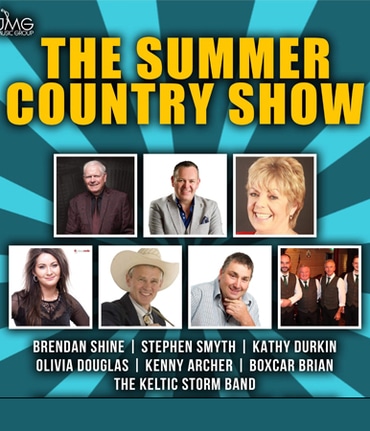 Get the Stetson’s ready for The Summer Country Show which features a host of your favourite stars all on one stage. The super line up will include the accordion maestro Brendan Shine, fiddling sensation Stephen Smyth, the fabulous Kathy Durkin, the hugely talented Olivia Douglas, yodelling Kenny Archer and the toe tapping Boxcar Brian, who each will perform their trademark hits accompanied by the superb Keltic Storm Band. What a night this is set to be!

One of Ireland’s greatest and most durable entertainers, Brendan Shine was born in 1947, and started his musical career in the mid 1960’s when he started playing the accordion at secondary school. Since then, he has recorded more than fifty albums and had more hit singles in the Irish Charts than any other Irish artist with 40 chart singles between 1970 and 2007. More than Dickie Rock, Joe Dolan, or Brendan Bowyer, a testament to his popularity.

Stephen Smyth has been involved in country music for over thirty years and has recorded ten albums to date. His latest album is entitled “Never Let You Go”. Stephen also tours with The Stephen Smyth Band, founded in March 2005. The line up consists of Stephen Smyth on lead vocals also playing an array of instruments, namely: lead guitar, pedal steel, fiddle, saxophone and whistle, John Taylor on keyboards and saxophone and finally Chris Blair on lead vocals, guitars and banjo.

Kathy Durkin is an Irish singer in the Country and Irish genre. A native of Butlersbridge, Co. Cavan, she is best known for her hit “The Clock in the Tower” and “Working Man” which stayed twenty-six weeks in the charts. She is one of five daughters and three sons of the well-known fiddler Eugene Leddy, who toured Ireland with his Ceili band in the 1940s and 1950s. She currently lives in Cavan with Andy, her husband of thirty-eight years and their family.

Olivia Douglas has quietly but quickly established herself as one of the brightest young talents on the Irish country scene, to the point where she is now one of the most sought after performers. The year 2019 saw Olivia tour nationally and internationally with both Nathan Carter and Derek Ryan, as well as adding to her collection of awards, having been recognised as one of Irish country music’s leading entertainers at the Sunday World Music & Entertainment Awards, the Hot Country Awards, and the Keltic Country TV Irish Entertainment Awards.