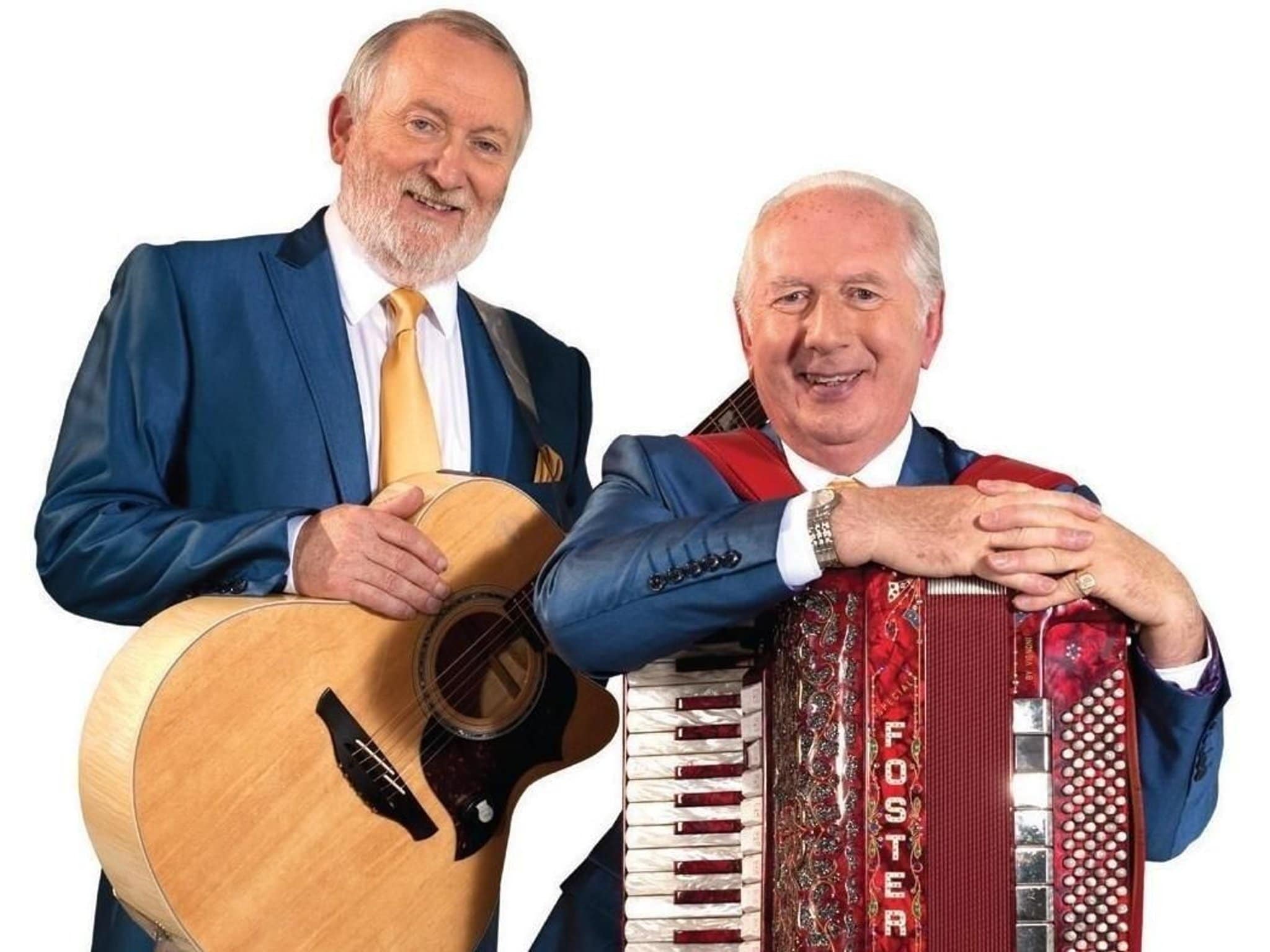 International Recording artists Foster & Allen are celebrating their 45th Anniversary in the Music Business with their “We’ll Meet Again” Tour.

It will be over 2 long years since Mick Foster & Tony Allen have last toured Northern Ireland.

Foster & Allen are presently in studio working on a brand new 20 Track album which is due for release early 2022.The album is going to be aptly called “We’ll Meet Again” which features their version of the Vera Lynn Classic song as well as many other new recordings and also some original songs.

Mick & Tony will of course be performing all their Hits like “Bunch Of Thyme” (it will be 40 years in February 2022 that Foster & Allen appeared on Top Of The Pops performing Bunch Of Thyme), Old Flames, Maggie, After All These Years, We Owe It All to You, Mrs. Brown’s Boys, as well as some of their new recordings.

Mick was born in 1947 in County Kildare, in sight of the Curragh, which is probably the reason why he has a great love for horses and the open air.

He now lives in Mullingar and has a small farm where he spends all his time, when not touring, looking after his horses and some cattle. Mick is very keen on his music, and states that his accordion would probably be the last thing he would be prepared to give up.

He states that from an early age he was influenced in his music by the famous Jimmy Shand and another all time great accordion player Will Starr. Mick was taught to play the accordion by a Westmeath nun and a local hero Frankie Gavigan.

Mick Foster has a unique style of playing his accordion and a singing voice which suits the type of songs he picks. With his Foster Special accordion he will have us all tapping our feet and clapping along once more.

Tony was born on 24th February 1952, the youngest of a family of nine children. He was very keen on music from an early age, and was very much encouraged by his parents and teachers. His father Patrick was a fiddle player while his mother was a fine singer.

Tony started playing the accordion after one of his brothers brought him an accordion home from England. It wasn’t too long before he joined the Mary Landers (a local band) and in turn joined the Kieran Kelly Band replacing Brendan Shine. It was another Moate man, Kevin Sheeran, an accomplished musician and songwriter in his own regard who recommended Tony for the job in this band. They used to play mostly around the Midlands and a residency in the Irish Club, Parnell Square, Dublin every Tuesday night.

Tony’s whole life revolves around music, and he enjoys every minute he is entertaining people all over the world. He opened a recording studio in Moate, named “Roseland Studios” and all the major acts in Ireland record their albums there. Tony is totally motivated by music and with having the studio he is now directing his interests into the technical side of the business. However we all know Tony as an entertainer, and there is no chance that he would ever give that up. He has a tremendous singing voice, with the ability to make any song his own.

I am sure you will enjoy Tony singing his new songs as only he can, for many years to come.