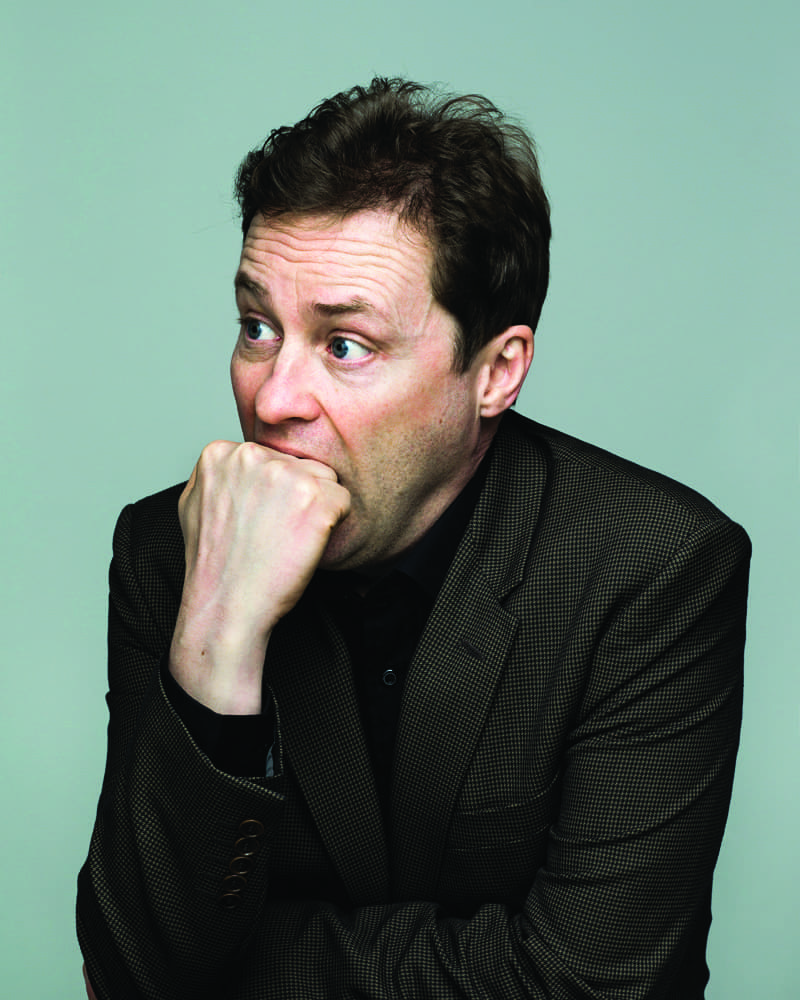 FATHER Ted star Ardal O’Hanlon will headline the new season of entertainment at the Market Place Theatre in Armagh.

O’Hanlon – Fr Dougal in the classic Channel 4 sitcom – will take his new stand-up show to the award-winning city venue on Thursday, October 3.

And the laughs don’t stop there!

Just the following night Phill Jupitus – long-time panellist on the BBC’s ‘Never Mind The Buzzcocks’ comedy music quiz show – will be on stage.

Confirmation comes as the Market Place this week unwraps it’s Autumn 2013 programme of events, with 85 performances, 37 workshops and classes for adults and kids, the annual pantomime, 10 visual art exhibitions and much, much more!

Drama audiences can expect some real treats in the autumn season with a variety of plays both serious and comic.

’50 Shades Of Red, White & Blue’ is the hilarious take on the famous novel of a similar name and comes for two nights only on Wed 28 and Thursday 29 August. The Marie Jones comedy ‘Fly Me To The Moon’ comes to Armagh on Saturday 7 September followed by Martin Lynch’s eagerly-anticipated new drama ‘Meeting At Menin Gate’.

William Shakespeare’s ‘Othello’ is performed by Icarus Theatre Collective on Wednesday 2 October, and the award-winning one-woman-comedy drama ‘Are There More Of You’ takes to the stage on Tuesday 8 and Wednesday 9 October. ‘The Departure Lounge’ on Wednesday 9 October is set in a Northern Ireland Nursing Home where all manner of antics take place with hilarious results.

In ‘Austen’s Women’ on Friday 11 October, 13 of Jane Austen’s memorable characters come to life, and on Friday 18 October comes a new drama from the creators of ‘A Night With George’ and ‘The Sweety Bottle’.  Another new drama ‘Auditions, Zoe’s Auditions’ comes to Armagh on Sat 19 October, telling the hilarious story of the ups and downs of life as an actor.

‘David Copperfield’ on Fri 25 October is a compelling drama about the life of the young Charles Dickens.  ‘An Ordinary Man’ on Thurs 31 October is John McDwyer’s hit play from Beezneez Theatre Company whilst comedian Conal Gallen presents his new play ‘A Bit On The Side’ on Fri 1 and Sat 2 November.

‘Piaf The Songs’ mixes the drama and music of Edith Piaf and comes to The Market Place on Thurs 7 November and the award-winning Bruiser Theatre Company present Brecht’s ‘The Caucasian Chalk Circle’ on Thurs 21 November.

Comedy fans are in for a real treat in the Autumn programme at The Market Place, kicking off with everyone’s favourite Australian comedian – Adam Hills – on Wednesday, 25 September. ‘Father Ted’ star Ardal O’Hanlon comes to Armagh on Thurs 3 October and the star of BBC’s ‘Never Mind The Buzzcocks’ Phill Jupitus comes to The Market Place on Fri 4 October.

‘Bond’ is a hilarious parody on the 007 phenomenon starring Gavin Robertson and takes to the stage on Wed 6 November. Irish comedian Bernard O’Shea visits Armagh on Sat 9 November, whilst ‘The Boys From The Blame Game’ [Colin Murphy, Tim McGarry, Jake O’Kane] perform on Sat 14 December.

Music audiences have a huge variety of choice in the Autumn programme starting with ‘Talon The Best Of Eagles’ on Thurs 19 September, then leading ABBA tribute ‘The Bjorn Identity’ on Fri 27 September. ‘The Extraordinary Ella Fitzgerald’  tells the story of one of music’s greatest legends on Fri 27 September and ‘Phantom & The Musicals’ takes audiences on a whistle-stop tour of The West End & Broadway on Thurs 10 October.

Eleanor McEvoy performs on Thurs 10 October and ‘Simon & Garfunkel Through The Years’ on Fri 18 October charts the life and music of the great duo. ‘Totally Take That With Robbie & Olly’ celebrates the music of Take That, Robbie Williams and Olly Murs on Thurs 24 October. ‘Buddy Holly & The Cricketers’ are the leading Buddy Holly music act and perform in Armagh on Wed 30 October.

The ever-popular Jazz Supper Evenings return on Fri 1 November with music by The Linley Hamilton Quartet. Singer Liam Lawton performs on Thurs 7 November and ‘Hats Off To Led Zeppelin’ power onto the stage on Sat 9 November. ‘Stayin Alive’ perform the story of the life and music of The Bee Gees on Thurs 21 November and The Balmoral Big Band perform on Fri 22 November.

Fans of traditional music can enjoy a concert by Iarla O’Lionaird & Steve Cooney on Sat 26 October and the 20th William Kennedy Piping Festival celebrates in The Market Place from Fri 15 to Sun 17 November.

The ever-popular ‘Christmas With Cantilena’ performance comes to The Market Place on Wed 11 December.

Toddlers, kids and young people are well served in the autumn programme. ‘Hairy McClary’ is a wonderful family show based on the famous books and comes to The Market Place on Sun 6 October. ‘Duck, Death & The Tulip’ is presented by Cahoots Ni on Sat 12 October and ‘Faerie Stories’ on Sat 2 November is a wonderful puppet and storytelling show for all kids aged 5+.

This year’s annual Pantomime at The Market Place is the spellbinding ‘Aladdin’ which runs from Fri 6 – Sun 22 December.

There are a host of workshops for adults to choose from across the autumn programme in everything from patchwork, photography, recycling furniture, flower arranging and guitar, to salsa, felt making, wood carving, crocheting, creative writing, make-up, wood turning, lace-making, pate de verre, photoshop, card making and print making.

Tickets for all performances and workshops are now on sale and can be purchased from The Market Place Theatre Box Office on 028 3752 1821 or online at www.marketplacearmagh.com