Comedy, drama and song at the Market Place in Armagh 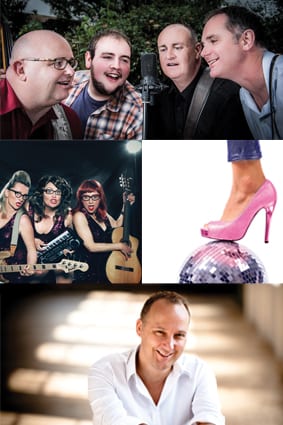 There’s comedy, drama and song on the bill at Armagh’s Market Place Theatre, as February kicks off with a jam-packed line-up of events.

‘Dirty Dancing In Le Shebeen’ sees the return of the loveable Maggie Muff, in the sequel to ’50 Shades Of Red, White & Blue’.

Maggie and her buck-eejit sidekick Big Sally Ann are planning Sally’s part in Le Shebeen. She wants to recreate the last dance from ‘Dirty Dancin’ in le Shebeen’ on her birthday night. But in the world of ‘The Muff’ things don’t run as smoothly as you’d think.

This production takes place on Wednesday 4th February. Tickets are priced £18. Please note there is content of an adult nature including sexually explicit language.

‘King Blue’ is a new bluegrass band in the traditional vein bringing together some stalwarts of the Irish Bluegrass scene from the last twenty years in a show peppered with original songs and fast paced tunes.

Clem O’Brien, regarded by many as the country’s premier Bluegrass vocalist and guitarist has played this music at the highest level for over twenty years, touring as a featured artist with the world renowned Chieftains.

Sean Mckerr has been playing Mandolin for twenty years, and recently featured as the bass player in the World International Bluegrass band at the IBMA convention in Nashville.

Mel Corry is also a veteran of the Dusty Millers Bluegrass Band and the Mean Eyed Cats, and earlier this year toured with New York based Buddy Merriam and Backroads. Caolan Derby holds down the bass duties in King Blue. His expertise as a bass player defies his youth and he plays with a variety of styles from aggressive rockabilly to slow waltzes.

King Blue will perform on Friday 6th February at 8pm. Admission is £11.

On Saturday 7th February, Peter Corry returns to the Market Place Theatre with an evening celebrating some of the greatest songs from the movies. Peter will take you on a journey down memory lane with some of the most iconic and memorable songs ever written for films from the past to the present.

From the heat of Casablanca to the fun of Mamma Mia, the sultry Moulin Rouge to the wonderful World of Disney…..acclaimed international singer Peter Corry will delight you with a host of movie memories. Tickets are priced £22.50 each.

In their most dangerous show ever, ‘The Nualas’ break the mould they made previously with a deluge of new songs, higher harmonies, different keys and slightly shorter dresses, if that’s possible! And there’s more – expect new Nuala revelations, harder laughs, slicker riffs, and even tighter foundation wear!

When this show previewed in Dolan’s of Leitrim at least three Gardai and a relationship counsellor had to be called. LOCK UP YOUR HUSBANDS.

You have been warned. The Nualas will perform on Saturday 7th February at 8pm. Tickets are priced £16.