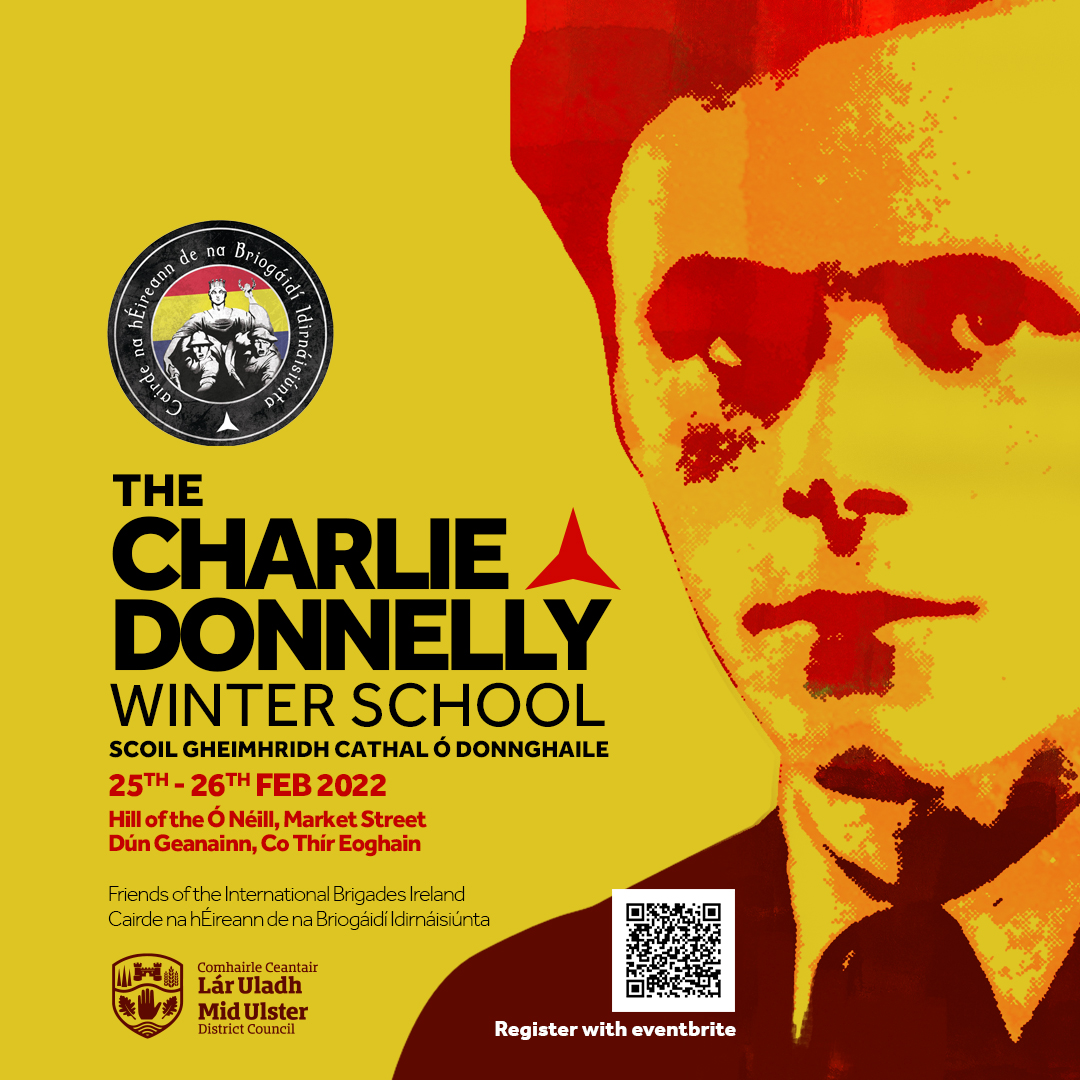 The Charlie Donnelly Winter School returns to Dungannon on 25th and 26th February after a number of years in abeyance. The Hill of the Ó Néill and Ranfurly Arts Centre will play host to most of the events scheduled for the weekend which will focus on the life and ideals of the Dungannon-born, revolutionary socialist poet.

Appropriately, the return of the Winter School to Co. Tyrone in 2022 coincides with the 85th anniversary of Charlie Donnelly’s death in the Jarama Valley outside Madrid while fighting with the XV International Brigade during the Spanish Anti-Fascist War. An extensive programme of events commemorating Donnelly and his International Brigade comrades has just taken place in various locations in Spain.

Charles Donnelly was born in Killybrackey, near Dungannon, County Tyrone on 10 July 1914. His father, Joseph Donnelly sold the family farm in 1917 and moved the family to Dundalk where Charles received his early education in the local Christian Brothers School. In 1928, the family moved again, this time to Dublin. Charlie enrolled in UCD in 1931, where he studied Logic, English, History and the Irish language. In university he began writing poetry and prose for student publications.

He joined the radical group, the Republican Congress in 1934 and the 20-year-old Donnelly was soon elected to the National Executive. Thereafter, he wrote for the Congress newspaper on political and social questions. In February 1935, he left Ireland for London. In the British capital he worked for the
Republican Congress London branch.

In 1936, with the outbreak of civil war in Spain, he joined the International Brigades. He reached Spain on 7 January 1937 and at Albacete, met up with an Irish contingent, led by Frank Ryan, known as the Connolly Column, who had come to Spain to fight on the Government side. Donnelly and his comrades were attached to the American Abraham Lincoln Battalion.

On 15 February, after receiving only rudimentary military training, the Lincoln battalion was thrown into the battle of Jarama, near Madrid. Donnelly reached the front on 23rd February, where he was promoted to the rank of field commander. On 27th February his unit was sent on a frontal assault on the Nationalist positions on a hill named Pingarron. Donnelly and his unit were pinned down by machine gun fire all day.

Donnelly was eventually caught in a burst of gunfire. He was struck three times, in the right arm, the right side and the head. He collapsed and died instantly. His body lay on the battlefield until it was recovered by fellow Irish Brigader Peter O’Connor on 10th March. He was buried at Jarama in an unmarked grave with several of his comrades.

The collection of his work, The Life and Poems, was published in 1987. On the eve of the 71st anniversary of his death, 26th February 2008, Charlie was commemorated with the unveiling of a plaque in his alma mater, UCD. There are memorials and plaques to Charlie Donnelly in Killybrackey, Dundalk, Dublin, Omeath and Madrid.