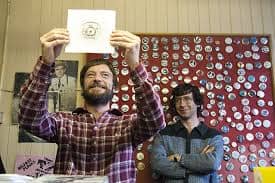 Good Vibrations, which stars Keady actor Michael Colgan, has today been named among the nominations at this year’s British Academy Film Awards.

The movie is up for outstanding debut for Colin Carberry and Glenn Patterson, who wrote Good Vibrations – the true story of Belfast punk pioneer Terri Hooley – who ran a record shop in the city at the height of the Troubles.

Michael Hughes, who goes under the stage name Michael Colgan, had a leading role in the film, which won rave reviews when released last year.

The former Keady man, pictured to the right in a scene from the movie, is now the face of the Harp Lager TV advertising campaign, and will be understandably thrilled at the film’s BAFTA nod.