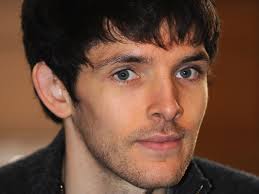 The 28-year-old star of the hit BBC flagship show Merlin features in tonight’s ‘Elegy for April’, directed by Jim O’Hanlon and part of a series based on the acclaimed books by Benjamin Black, the pseudonym of award-winning Irish writer John Banville.

Also starring Michael Gambon, the 90-minute episode, filmed on location in Dublin last year, will be screened tonight (Sunday) at 9.30pm on RTE One.

Commissioned by BBC One and adapted by screenwriters Andrew Davies and Conor McPherson, Quirke (we never get to know his Christian name) is the chief pathologist in the Dublin city morgue – a charismatic loner whose job takes him into unexpected places as he uncovers the secrets of sudden death in 1950s Dublin.

It’s a rich and smouldering world along whose smoky streets and damp alleys Quirke goes from bars that glimmer with peat fires and whiskey to elegant Dublin houses brimming with sexual tension. It’s a time full of mystery, secrets and intrigue.

Each episode will sese him investigate the death of one of the unfortunate souls who end up on his mortuary slab. But as Quirke turns accidental detective he discovers his investigations are often more closely linked to his own life than he could ever have imagined. Little by little he is forced to confront the sins of his past as he peels back the layers of his own tangled family history.

The three feature-length episodes each take their stories from different books in the series, ‘Christine Falls’ and ‘The Silver Swan’ by Andrew Davies and ‘Elegy for April’ by Conor McPherson.

Author John Banville – speaking last year as the series was commissioned – said: “I am very excited by the prospect of seeing my character Quirke incarnated by Gabriel Byrne, a perfect choice for the part.  I know both Quirke and Benjamin Black will be wonderfully served by Andrew Davies and Conor McPherson, two masters of their craft.”

John McColgan, Founding Director, Tyrone Productions, adds: “As a friend and colleague of Gabriel Byrne over the years I am thrilled to see him bringing the brilliant, mercurial character of Quirke as created by John Banville to screens worldwide. BBC Drama has brought an incredible pool of writing talent to this project and I’m looking forward to seeing their scripts going into production.”

Joan Egan, Executive Producer, Tyrone Productions, adds: “The Dream Team – John Banville, Gabriel Byrne, Andrew Davies, Conor McPherson and of course the character of Quirke, who could not be thrilled by the prospect of bringing this series to a world audience in this co-production with BBC Drama and Element Pictures.”

Ed Guiney, Executive Producer, Element Pictures, adds: “Noir Dublin in the Fifties seen through John Banville’s eyes is such an appealing prospect. And who better to go on the journey with than Gabriel Byrne. We could not be more excited about being part of bringing this to the screen with the BBC and Tyrone.”

The series is a co-production between BBC Drama Production and Dublin-based companies Element Pictures and Tyrone Productions.