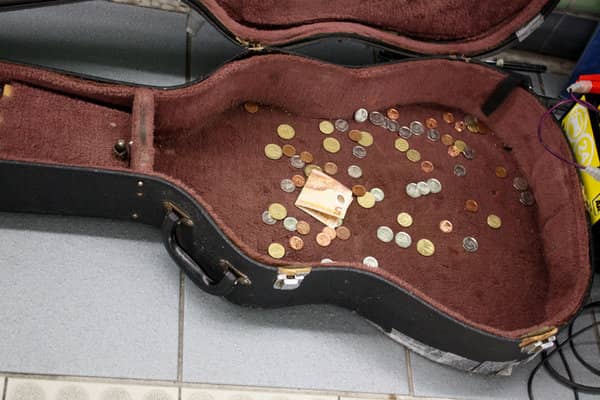 The buzz is building for BuskFest 2014, as Ireland’s fastest-growing busking festival returns to the streets of Banbridge on Saturday, June 21.

Music fans will be in for a treat, when over 80 performers take to the town centre between 1.00pm and 4.30pm.  The festival is a full-on family affair, with something for all ages, including free face-painting at the Old Town Hall for little ones.

The fun then continues in Solitude Park from 4.30pm, as Allison McGrath and Soulantics take to the stage to get the crowd dancing, before the Awards Ceremony, hosted by BBC Radio Ulster’s Ralph McLean.  The winners of each of the six categories will then perform on stage.

The Solitude audience can expect some serious serenading, if last year’s success stories are anything to go by.  Juram Gavero (Best Individual 2013) has recently made it through the audition stage of this year’s X Factor, while Sarah Toner (Best Junior 2013) supported Jordan O’Keefe on some of his local tour dates.  ‘The Left Backs’, who performed last year, were named ‘Best Band’ at the Irish Youth Music Awards in April, and Worn Down Shoes (Overall Winners 2013), Cup O’ Joe (Best Band 2013) and The Molly Maguires (The Outlet Spirit of Buskfest Winners 2013) are now household names to local music fans, playing regular gigs around Northern Ireland.

Performers will compete in a number of categories including Overall Winner, Best Individual, Best Band, Best Performance, Best Junior Performer and the ‘Spirit of BuskFest’ prize, sponsored by The Outlet.

Once again, this year, the Overall Winner will be given the opportunity to perform at the prestigious Sunflowerfest, held at Tubby’s Farm, Hillsborough from 22-25 August 2014.

For some buskers, it’s not all about the competition. BuskFest institution Geordie Rice returns to his pitch for the 10th year running.  During the last decade, the flautist has raised almost £10,000 for LIFT building projects for special needs schools and orphanages in Africa.  Geordie said ‘If you’re new to BuskFest you’ll be amazed at the variety of music on the day, and it’s great to see so many younger performers having the confidence to get out there and have a go.  There is great buzz in Banbridge on BuskFest day.  The craic is fantastic. I have so many lovely memories of the generosity of the audience – it all adds up!  I can’t wait to get back to BuskFest.’  This year, Geordie will be busking to raise funds for his next trip to Africa, departing on 4 July.

It’s not too late to get on board for BuskFest. Performers can still register between 9.30am and 11.30am on Saturday 21 June at the Old Town Hall, Scarva Street, Banbridge, or online at www.buskfest.com. Further details about the festival, rules of the competition and how to register are all available on the official website at www.buskfest.com and on the Facebook page at www.facebook.com/buskfest.