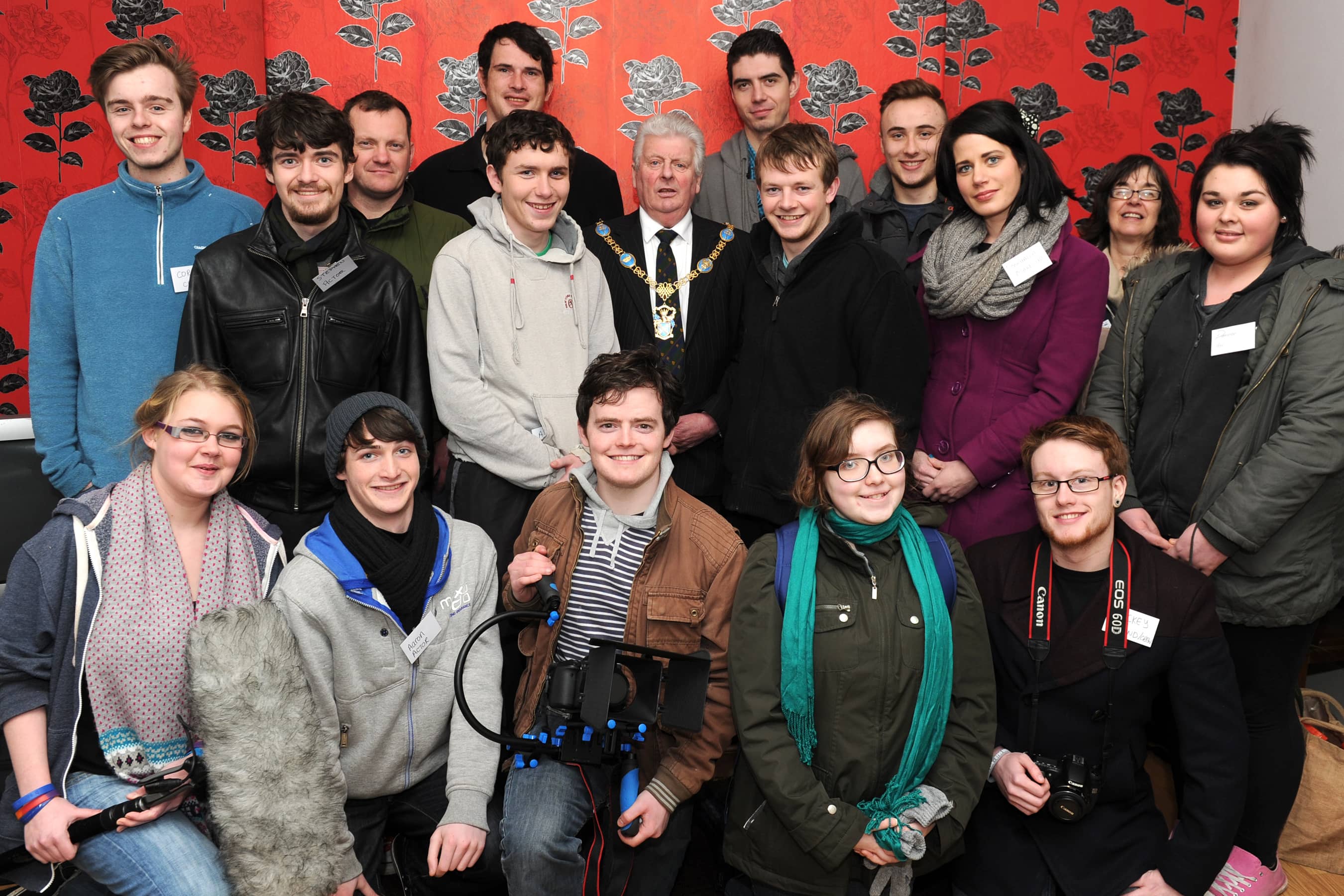 Armagh is a lively, vibrant city with an abundance of art, leisure and cultural occasions.

‘2Late’ is being produced by two young men, Adam McCaffrey and Gary Wales who met at Armagh SRC when they enrolled on a performing arts course.  Adam (18) wrote the script and plays the role of Sam Hunter, a young teenager who is a victim of bullying.

Adam is from Portadown and went to his local secondary school where he developed an interest in the film industry; since leaving he has discovered an interest in writing and ‘2late’ is his first script although he is sure there are many more to follow. His stage debut in ‘Sinbad the Sailor’ saw him play the role of Crunchbones and he is currently involved in a web series called ‘The Gifted’.

Adam has high hopes for ‘2late’, and would be the first to say that the characters and storyline are lodged in his brain because only the writer know happened before and what will come after the credits roll.

Gary (18) is the director and plays Reece who tries to protect his best friend Sam from the bullies.  Gary was born in Falkirk, Scotland and moved to Armagh when he was 13, just in time to start High School and audition for the part that would make a huge difference to his life – the school production of ‘Oliver’.  When his drama teacher saw how Gary put his heart into performing he was asked to play the lead role.

Gary continued with school drama, playing Kenickie in ‘Grease the Musical’ in final year and this path led Gary into film and TV as an extra and in acting roles.  Now he is making his debut behind the camera as producer and director of ‘2Late’.

Gary and Adam approached Titanic Vision Entertainment Production Company in late 2013 to discuss filming ‘2Late’.  The company’s founder, Phil McAleavey was instantly attracted to the potential and the real issues portrayed in the film which are a problem facing many young people today. Phil, who is co-directing alongside Gary, is director of photography and has assembled his own trusted crew to work on the film.

Anecdotes from the ‘2Late’ shoot are no different to any other movie and the cast were delighted when the feel good factor set in after the young actors were so convincing when rehearsing a bully scene that a passerby stopped his car and demanded to know what was going on.

Gary said “from this guy’s point of view he could see 3 youths beating up 2 people who were laying on the ground – and this is where his courage showed, this stranger was prepared to do the right thing, to try to stop bullying.  Every day we meet the challenges and obstacles of bullying and every now and again we come across something or someone that restores our faith in humanity.”  The young director interviewed the ‘hero of the day’ and uploaded it to the official 2Late Movie Facebook page.

All the actors, crew and production team are volunteering their skills and services to the making of ‘2Late’.  Adam said, “We have to thank EVERYONE who has had anything to do with this production – the actors, the crew, the sponsors, the people helping out behind the scenes, security and of course family and friends who have supported us in the making of ‘2Late’ to bring the issues and consequences of bullying into the public domain.”

The forward plan is to raise awareness of the harsh realities of our modern society, make a stand against bullying and enter ‘2Late’ into film competitions and festivals.  The premier will be in the Armagh City Hotel in late September and hopefully some of the dignitaries who visited the set will also be able to attend the event

Being young and technologically aware, the ‘2Late’ team raised funds using a crowd-funding platform that helps bring creative projects to life to help pay for pre and post-production costs.  Gary commented, “We set a target of £500 on Kickstarter and we have raised £555 with 10 days left to run – so if anyone out there wants to help, please donate something.”

Gary added, “If we were rich we could just give money to the project, but because we are ordinary and young and still learning the best thing we can do is to donate our skills, our time and our enthusiasm.  It’s our way of making a contribution to society.  I think everyone has been touched by bullying at some time, either as a victim or knowing someone that has been bullied, or by seeing bullying happening around us.  This story is based on true life, we wanted to do something to start people talking about bullying and as well, ‘2Late’ is very close to our hearts.”

Sponsors of ‘2Late’ include Keegan’s Bar who fed the cast and crew, Specsavers who have supplied props, and Natalie Quinn who offered her premises on Victoria Street for filming, overnight stays and as headquarters for the production team in the lead-up to filming.  The producers, directors, cast and crew all say a big thank you to everyone who has helped.