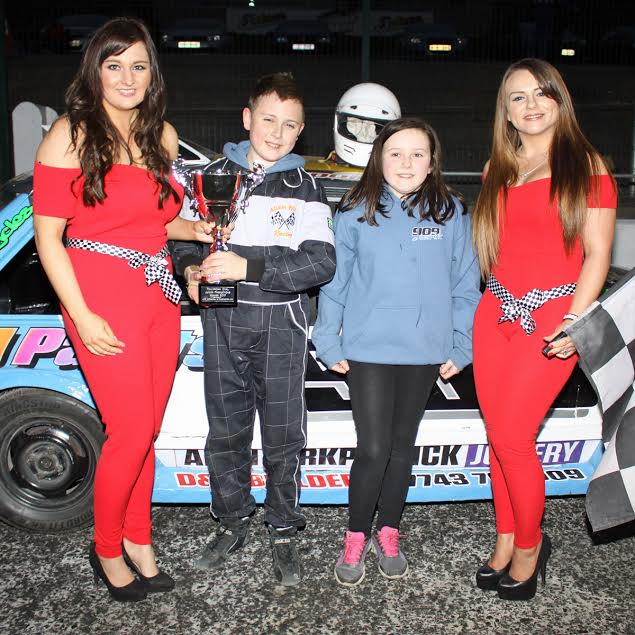 World Stock Rod Champion Stevie McNiece kicked off his 2017 season in the best possible fashion with a commanding victory in the Irish Masters at Tullyroan Oval on Saturday night.

A number of caution periods littered the race, but despite Siobhan closing in towards the end, McNiece held on for the victory over Martin with Johnston and defending Irish Masters Champion Chris Lattka next up. The reversed grid second heat saw an unchallenged victory for former Irish Champion Jonny Cardwell, who cruised home ahead of a massive places scrap between Shane McMillan and Curtis Greer.

The Irish Masters final saw McNiece and Cardwell tied on points for pole position, with McNiece winning the toss to take up the premier position on the grid. There then was high drama as Cardwell’s car died on the rolling lap, necessitating some lightning repairs before he retook his place on the front row.

World Champion McNiece quickly stamped his authority on proceedings, edging clear over McMillan and Greer who were renewing their battle of the previous heat as they disputed second and third. Despite the battling duo closing nearing the end, McNiece was well in control and took the chequered flag in some style, with McMillan, Greer, Cardwell and Lattka next up.

Another healthy entry of 2.0 Hot Rods saw Dean McFarland the early leader in heat one before Sean Dynes took over out front and raced home to an excellent win. Things got a little frantic in the pack, with Feargal McNally coming through to second ahead of Brian Cherry. Dean McFarland again headed the early exchanges of the second heat, before Aaron Beattie swooped ahead to the lead. Beattie soon had his mirrors full of McNally though, with Feargal executing a sublime outside line pass to hit the front just three laps from home. Beattie and Allen Cherry filled the places this time around.

The feature race final soon settled down to a scrap out front between Brian Cherry and Colin McFarland, the latter having an excellent run after a torrid time of late with mechanical woes. Behind the lead duo Dynes was fighting a rearguard battle to keep Joel Richardson, Adam Best and European Champion Stephen Emerson at bay. Disaster struck less than a lap from home though, as Dean McFarland’s engine exploded in the biggest possible fashion on the entrance to turn three. Those behind had no chance to avoid the oil, and we quickly had a number of cars embedded in the wall, thankfully without injury. The Race Stewards wisely called a premature halt to proceedings with the result declared on the last completed lap, handing Brian Cherry his first ever silverware ahead of Colin McFarland and Dynes. There will be some midnight oil to be burnt on the damaged cars before the formula’s next outing.

The opening Superstox heat saw a superb four way battle between Cyril Hawe, Aaron McNeilly, Keith McAreavey and Sean Mark for the lead, with McAreavey bursting clear late on to secure the victory. Conor Murphy’s best run for some time saw him grab the runner up spot ahead of Irish Champion Denver Grattan. Hawe was the first to show in the second heat, but he was dislodged from the lead by McNeilly four laps from home as Aaron took the win. McAreavey and Hawe this time filled out the places.

Sean Mark was the star turn early in the final, the Co. Antrim racer moving clear out front before being challenged by McNeilly’s RCE machine. McNeilly went ahead, and for quite some time looked as long he would make amends for a week previous when he lost out on the feature race win on the last bend. His fortunes took a turn for the worse again though when Jordan Robinson coated the first turn in fluid late on and McNeilly unfortunately went skating out of the lead and the race. After a brief hiatus to clean up the circuit, Mark pulled off a textbook restart the lead the pack away for the remaining three laps. Star man Grattan had his sights on his first win of the campaign though, and duly bumpered Mark wide on the final turn to take a dramatic last gasp victory. Mark could be well impressed with his showing in second, with McAreavey in third. Two meetings so far this term from the Superstox, with both final winners being decided on the final bend – excellent stock car racing!

A pre-meeting Drivers Briefing saw some much improved rolling starts in the ProStocks division, with novice Joe Largey leading the way on early in the opening heat. A great battle then ensued between himself, Jamie McCann and Dylan Booth, with McCann stealing through for the win over Largey and William McFaul. Largey again led the opening laps of heat two, before a caution period for a flash fire on the McFaul car brought the star men right into contention. A messy restart saw Del McLaughlin excluded before Irish Champion Dan Shannon powered through to the win over World Cup holder Leonard Dunn and Ryan Abernethy.

Impressive novice Largey stamped his authority all over the final, leading from start to finish to grab the silverware on only his second ever outing. McLaughlin also produced a great drive to take second ahead of McCann, with Shannon getting the better of an entertaining scrap with Stephen Boyd to take fourth.

The Junior Productions first outing of the season saw the first win of the campaign fall to Portadown’s Ben Bruce. Adam Weir had led until a late race caution for the stranded Adam McFall car on the back straight, but he hit trouble on the race resumption allowing Bruce through to a morale boosting win over Graham Meek and Drew McKeown. Weir made no mistake in heat two, leading all the way home ahead of Bruce and Sam McNeice.

Weir had only recently been cleared to race following a broken arm sustained away from the race track, but the injury didn’t deter him at all once again in the final. He quickly relegated early leader Josh Rodgers to take his second win of the night and earn a rise to the blue grade for the next meeting. McFall was second over the line but was demoted for contact, handing Meek and Bruce the other podium positions.

Next Sunday (April 23rd) sees one of the biggest meetings of the season at Tullyroan Oval, the Unlimited National Bangers Shamwreck. Celebrating its 20th anniversary, the event has attracted a quality field of almost 60 cars from all over the UK, with the entry led by the famous Bears team from Brighton.

Carnage will be the order of the day, with the programme also including 1300 Stock Cars, ProStocks, Ninja Karts and Reliant Robins. The first race leaves the grid at the earlier than usual time of 1pm.