Winston Weir the toast of Tullyroan Oval on Saturday night 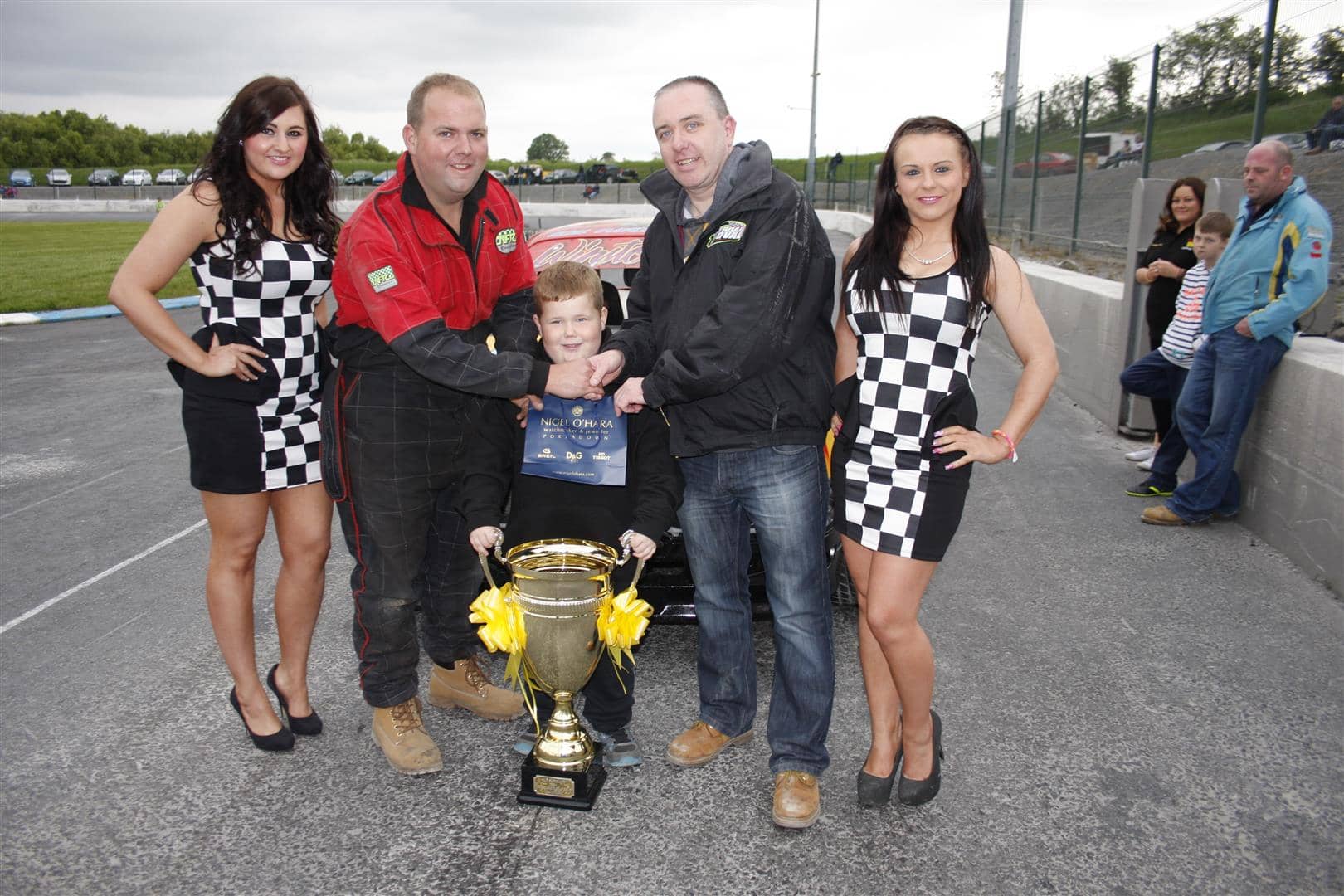 Newly crowned World Lightning Rods Champion Winston Weir was the toast of Tullyroan Oval on Saturday night. Not only was the Killyman racer given a rapturous welcome by the local fans as he displayed the World Championship trophy he won last weekend in Scotland, but he then went on to take the honours in the Lightning Rods final too!

It was an eventful evening of racing, sponsored by Wilson McCurdy Haulage of Broughshane, and the other final winners were Adam Maxwell (National Hot Rods), Frankie Lynn (Stock Rods) and Bradley McKinstry (Junior Productions).

It was the opening round of the 2ke Engineering Challenge Series for the Lightning Rods, and Portadown’s Scott Cochrane hit the ground running with victory in the night’s opening heat over Noel Reynolds and Norman Purdy. Stephen Hollywood then took the honours in the second encounter of the night, ahead of Purdy and Winston Weir.

Consistency saw Purdy net pole position for the closed grid final, and he quickly took up the running. A whole host of star names were queuing up behind the north coast man, with Jordan Rochford first to challenge. He couldn’t make the move stick and dropped back, before the same fate befell Dane Ferry. Weir then took up the gauntlet and was able to swoop himself right around the outside line to claim a very impressive victory indeed. They say the gold roof of World Champion is a heavy weight to carry – not on this showing it won’t be! Purdy and Rochford chased him home.

Round 13 of the National Hot Rods World Series proved far from unlucky for Crumlin’s Adam Maxwell, as he put his disappointing recent run behind him to lift the final honours. Superb dicing from the sport’s fastest cars thrilled the local fans throughout the evening.

Londonderry’s David Gurney took the first chequered flag of the night, just holding off a fast charging World Champion John Christie at the flag, with Maxwell in third and points chart leader Andrew Murray fourth. Dungannon’s Simon Kennedy netted the win in heat two with a controlled drive off the front, with compatriot Keith Martin in second and Murray next up.

The final turned into a tremendous scrap, as once again the grading worked a treat and saw the field come together over the final laps. Maxwell was on a mission from the off, but was struggling to catch runaway leader Gurney. Slowly but surely he reeled him in, arriving on his bumper within the closing stages. With a lap to go he went for the kill, selling Gurney a dummy and diving for the inside. Adam was well inside before David tried to shut the door, leaving the Crumlin ace to cruise home to a welcome win. Keith Martin, Glenn Bell and Murray filled the major places.

Come final time pole man McFall was forced out early with a loose bonnet, which allowed Cullybackey’s Lynn to surge ahead and lift thetrophy. Cardwell and Carl Sloan kept him honest all the way to the flag in second and third.

Nutts Corner’s Bradley McKinstry was the pick of the bunch in the Junior Productions, taking a deserved heat and final double. Portadown’s Jordan Robinson took the opening race of the evening over County Waterford’s Ian Riordan and Edmund Davis, before the rest of the meeting belonged to McKinstry.

Bradley led home Davis and Shane McMillan in heat two, before a superb move in the final saw him move past Riordan and Caoimh Donnelly to take a fine win. Riordan and McMillan filled out the podium.