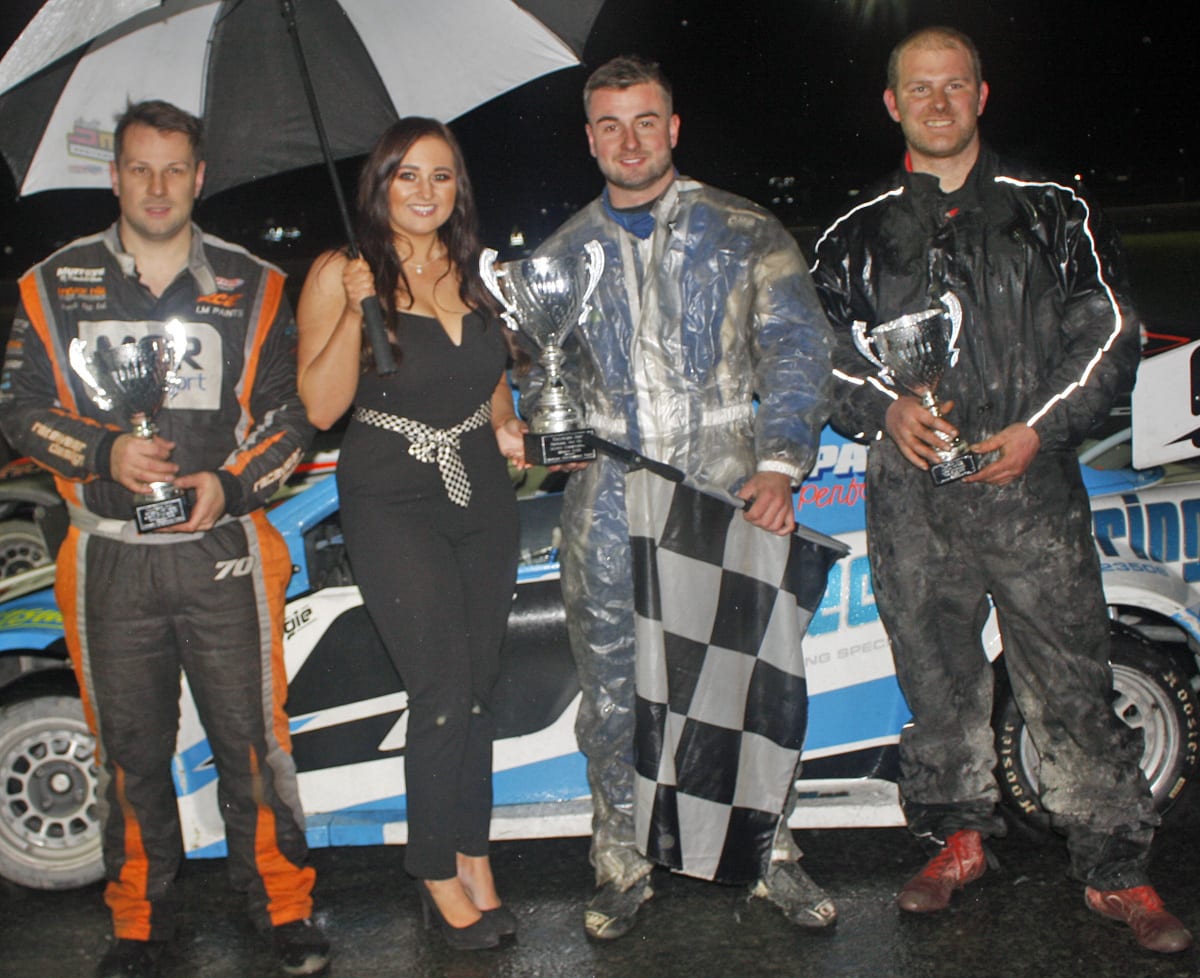 The horrendous track conditions at a very wet Tullyroan Oval on Saturday night didn’t dampen the action on track, as the drivers put on some tremendous racing on a treacherous raceway.

Dublin’s Gary Butler took victory in the Grand Final of the Stock Rods PC Paints & Components Challenge Series which had its fair share of talking points, whilst the other feature race wins during the Hankook Performance Tyres sponsored meeting fell to Denver Grattan in the 2.0 Hot Rods and fellow Banbridge driver Jonny Teggart in the Thunder Rods.

There was an explosive start to the Lightning Rods Irish Championship race, as polesitter Jordan Rochford ran wide into turn one on the sodden track taking fellow front row starter Nigel Jackson with him. That opened the door for Tim Hazlett to hit the front ahead of Mark Corry, with Jackson settling into third spot. Nigel quickly dealt with Corry, before running down leader Hazlett. Jackson always excels in the slippery conditions, and he swooped right past Hazlett to hit the front of the title race. A mid race caution when Aaron Stewart’s engine expired in a huge way didn’t stop Jackson’s run to the title win, Nigel taking the flag in style to record yet another Irish Championship triumph. Richard Stewart managed to get past Hazlett for second having started well down the grid, with Tim having to settle for a creditable third place.

The reversed grid Irish Revenge race saw a fine win for Ally Neill, with Jackson returning to second
from the back row of the grid ahead of Ricky Shaw.

Welcome Republic of Ireland visitors Dave Casey and Jeff Riordan bolstered the National Hot Rods grid for the Ulster Championship, with a unique Formula 1 style qualifying system in use. The slowest drivers on the lap timing clock were eliminated during Q1 and Q2, leaving the fastest trio of Glenn Bell, Shane Murray and Jaimie McCurdy to battle for pole position during Q3. McCurdy and Murray swapped times back and forth, but Bell was the master of the conditions to grab pole spot for the championship race in sublime fashion.

As Bell raced clear from the off in the Ulster Championship event, Murray settled into second ahead of Ben McKee as McCurdy hit trouble and retired. Casey’s pressure on McKee saw him grab third spot but up front Bell was home and dried to a successful defence of his title, with Murray and Casey filling out the podium.

The reversed grid Grand National saw Keith Martin fight off a spirited challenge from Bell to just
hang on for the win, with Murray and Casey next home.

Another huge field of Stock Rods took to the circuit, the rude health of the formula underlined by a posse of twelve star graders lining up at the rear of the grid.

Johnny McCloy set the pace early on in the opening heat, leading for much of the distance before Del McLaughlin slipped past with three to go to record the victory. Lee Wylie took second ahead of McCloy, with some huge battles amongst the main pack behind. McLaughlin repeated the dose in the second heat, this time leading from flag to flag for his second win of the evening.

British Champion Shane McMillan drove a great race to take second ahead of fellow star grader Stephen McCready and McCloy. McMillan and Stevie McNiece shared the front row for the Grand Final of the PC Paints & Components Challenge Series, with McMillan setting into the lead as McNiece got railroaded on the outside groove. Gary Butler continuously whittled down McMillan’s lead as the race progressed, arriving right with him as the five laps to go signal was shown. Butler tried his best to pull off the outside pass but Shane was equal to his every move and coolly thwarted each of his attempts.

Onto the last lap and Butler switched back to go for a gap on the inside, with the duo sensationally tripping over each other as they headed onto the back straight. McMillan got turned aside and his hopes were unfortunately gone. Butler took the flag ahead of Marc Morrell and Derek McMillan, and
he was allowed to keep the series victory after a very lengthy Stewards Enquiry into that explosive
final lap.

Michael Woods set the early pace in the opening heat for the 2.0 Hot Rods, before Allen Cherry came charging past to take the win over Stephen Emerson and Adam Hylands. Denver Grattan demoted Woods early in heat two to go on to take his first ever 2.0 Hot Rods victory, with Emerson and Hylands once again in second and third.

Grattan again hit the front early on in the Hankook sponsored final, edging out a healthy lead. Emerson worked his way through to second, but as he began to close on the lead his engine expired in the biggest possible fashion which blanketed the circuit in smoke. Grattan emerged from the haze to take his second win of the day and elevate himself to the blue grade for the next meeting, with Thomas Dilly taking an impressive second and Cherry third.

The Thunder Rods completed the programme, with Jonny Teggart taking a clear win in the opening heat over Josh Goligher, as the star men failed to make an impact on the busy circuit. Goligher turned the tables in heat two to take the win over Teggart, with Steven Elder this time in third.

The final saw the two heat winners, Teggart and Goligher, have a monster scrap for the silverware once they found a way past early leader Elder. Josh and Jonny swapped places back and forth, before Teggart settled in out front. A momentary slip from him though allowed Goligher back alongside but Teggart powered back around the outside to take a superb victory over Goligher, with Jerome Doherty announcing his comeback to the formula with a creditable third.

This Saturday night, October 20, sees an Irish Championship Triple Header at Tullyroan Oval for 2.0 Hot Rods, 1300 Stock Cars and Superstox, with Junior Productions and Ninja Karts completing the line up. The first race leaves the grid at 6.30pm.