Sunday start for Tour of Armagh 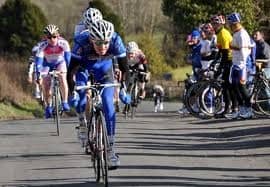 THE 2013 Tour of Armagh takes place on Sunday in a marked move from the August date that it had occupied for a number of years.

With an already full field of 100 cyclists, this 53rd edition of a quality race seems assured.

Last years Tour of Armagh winner, Thomas Martin, who is in fact the only Lurgan cyclist to have won the prestigious Patsy O’Connor Cup has his name on the list of entrants. There are just two other local riders on the 100 strong entry list, John Heverin and Matthew Heaney, both registered with Clann Eireann.

The event leaves Victoria Street Lurgan at noon, on 5 May, and after travelling through Portadown, Loughgall and Armagh, heads to Keady and over the mountain to Newtownhamilton, Markethill and back to Armagh again before the final run back via Tandragee and Gilford, with an expected finish just outside Lurgan on the Gilford Road around 3pm.

Clann Eireann travelled to the Boyne Valley in Drogheda on the 21st and 22nd April for one of the country’s premier road events for youths. It was a 3 stage event over two days for the cream of young racers up and down the country.

In the U16 event Declan Mullholland’s best place was a third in the first stage finishing just outside the top ten overall. In the U14 category Ethan Flaville finished 5th overall and Liam Wilson managed to finish 6th despite crashing on stage 2. Peadar Quinn and Joseph Lavelle also produced strong performances in the U14 event. In the U12 category Aaron Heaney finished second overall all with Ruairi Grimes finishing just outside the top ten followed by James Mulholland and Erin O’Neill. The U12 team was beaten by the narrowest of margins into second place for the team prize.

The Youth team brought this great form into the Beggs/ McGreevey Memorial at Dromore on Saturday, with Declan Mullholland taking the win in the U16 race, Ethan Flaville and Liam Wilson chalking up another second and third in the U14 race with Aaron Heaney and Ruairi Grimes finishing second and sixth in the U12 event. Aaron and Ethan also travelled to Cookstown on Sunday with Ethan taking another second place with Aaron scoring the win this time.