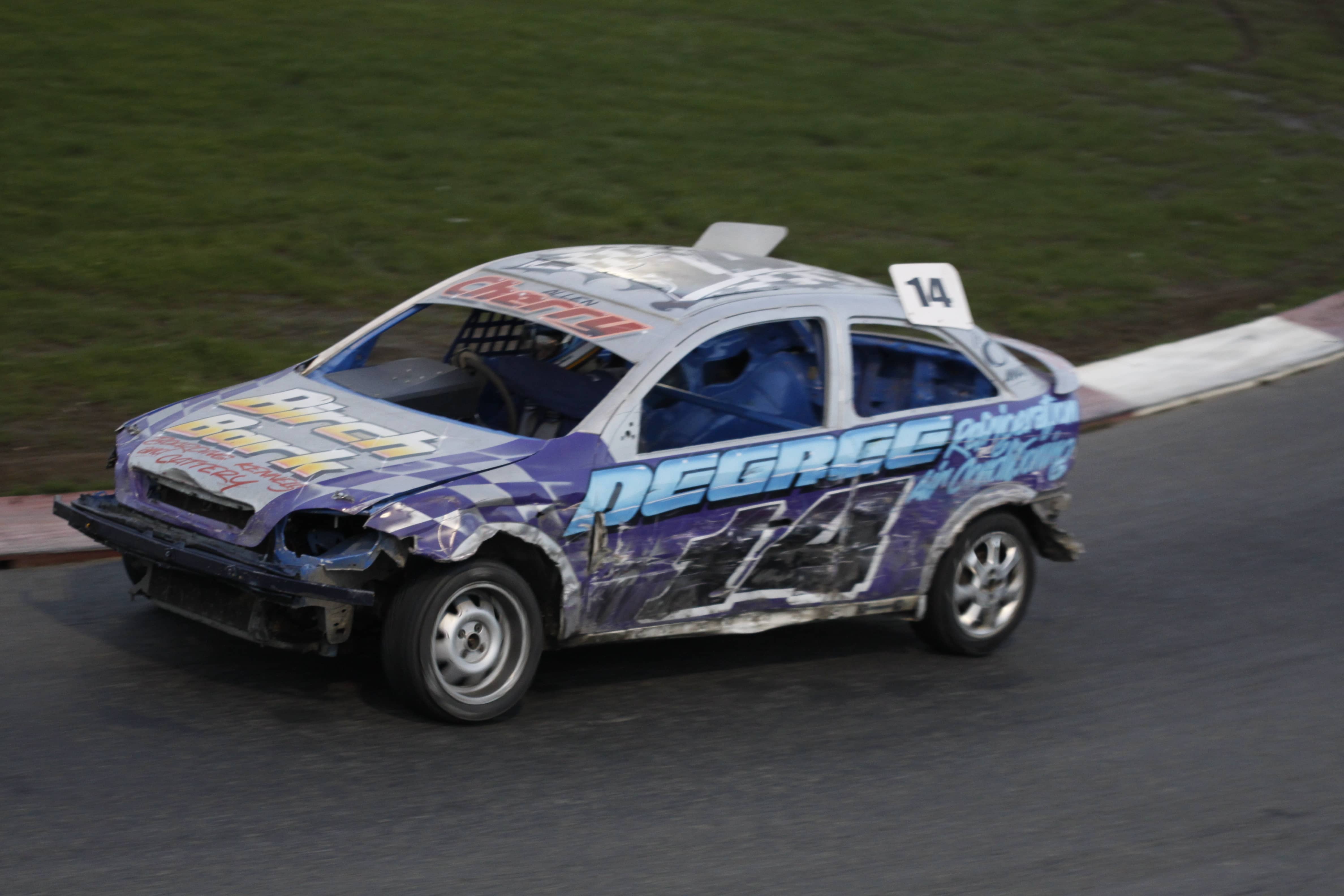 Cherry On The Cake!

With over 100 cars racing during the meeting, local Tullyroandriver Allen Cherry reeled off an impressive hat trick of wins in the ProStocks class at Tullyroan Oval on Saturday night. Sixteen-year-old Portadown lad Stuart Cochrane was another who grabbed a hat-trick of wins in the 2.0 Hot Rods, whilst other final winners at the meeting sponsored by MBB Quality Homes of Portadown were Ian McReynolds (National Hot Rods), Adam McFall (Ninja Karts) and Dane Ferry (Lightning Rods).

Local man Allen Cherry has been showing some excellent pace since joining the ProStocks, but on Saturday night he found the consistency to go with the speed and he guided his Vauxhall Astra home to three victories from three starts.i

It was the first round of the GH Tyres Supreme Series, and Cherry wasted little time getting some breathing space at the head of the huge 37 car field in heat one. He came home ahead of Robert McIlroy, before he was handed the victory in heat two when on the road winner Jack Gilpin was excluded for a technical infringement. That gave Cherry his second win of the night ahead of an improved run for Armagh man ConorMcElmeel.

With the final grid decided on points scored in the heats, Cherry had annexed pole spot but had a number of star names all around him. When many others would have buckled under the pressure, Allen managed to work his way through the backmarkers whilst keeping the huge chasing poack at armslength. McIlroy and former World Cup champion Tam Agnew tried all the could but Cherry was home to the win and his treble which will surely signal a move back in the grades for the next meeting.

Fresh out of the Junior Productions last year, many had predicted a bright future for Stuart Cochrane. In the hotly contested and competitive 2.0 Hot Rods it is quite daunting for any young teenager, but Stuart showed that he has a cool head on his shoulders by driving superbly all evening.

In heat one he had Irish Champion Derek Martin all over him like a rash for the final number of laps, but Stuart kept it tidy and raced home to his first win in the formula. More of the same came in heat two, when he held off another star man inPortadown’s Adam Hylands to take the chequers once again. Two race wins automatically upgraded Cochrane to the yellow grade for the final, but Stuart didn’t let the extra handicap deter him as he set about building another early lead.This time Bobbie Johnston and Adam Heatrick gave chase but couldn’t quite get on terms as Cochrane pulled off the treble and marked him down as the next star in the making in local oval racing. Johnston and Heatrick completed a podium made up of three of the youngest drivers on the grid.

Lurgan’s Ian McReynolds made a winning return to the National Hot Rod fold by taking the final round at World Series NI Round 12. As the series nears it’s end and with World Championship qualification on a knife edge, there was always going to be tension in the air as the elite formula of the ovals took to the track.

Terry Maxwell landed a very popular win in the opening encounter ahead of Any Steward and Gary Woolsey, before World Champion Glenn Bell scythed through to take the honours in the second heat of the night. Adam Maxwell, son of Terry, chased him over the line ahead of Mark Heatrick.

McReynolds had been settling back into the old routine during the heats following his short lay off, but by final time he was most certainly in the groove and soon relieved early pacesetter Simon Kennedy of the lead. As the challengers for World Final qualification squabbled fiercely over the places, McReynolds cruised home to land the silverware. Thomas Dilly claimed his best result of the night in second, ahead of Stewart in third.

The young stars of the future were in action in the new Ninja Karts class, and once again the 6-11 year olds didn’t fail to entertain! At what looked like breathtaking speeds at times, Ballymena’s Adam McFall showed them all a clean pair of heels in the first heat as he scorched through from the rear of the field to land victory over Matthew Nicholl and Stuart Emerson.

McFall and Jake Woolsey were on a mission in heat two, but neither could catch the flying Nicholl in this one and theLimavady lad held on for the win over McFall and Woolsey. The final all boiled down to another fantastic dice betweenNicholl and McFall. It looked as though Matthew would hold on for the win having thwarted Adam’s advance, but McFallfound a way down the inside on the final turn to snatch the win on the line in the closest of finishes.

Templepatrick’s Ben McKee made good use of his downgrading by taking the honours in the opening Lightning Rods heat of the night. For quite a time it looked as though it would be his brother Gordy who took the win, but he was sidelined in the latter stages with engine failure. Last week’s final winner, Martin O’Flaherty, took second ahead of Michael Lynch in third. Heat two saw Annaghmore man Mark Taylor take a morale boosting win after recent mechanical troubles, and for a time it looked like the feature race final might indeed fall to Mark too.

Taylor led for quite a part of the final, and when the pack closed he looked to have a major mechanical failure which pitched his car into a spin. A caution period was called and when racing resumed it was Coleraine man Dane Ferry who pulled clear to take his second final win in three outings. Brendan McConnell showed a return to form in second ahead of Nigel Jackson.

The next meeting at Tullyroan Oval is on Saturday May 25th at the earlier than usual time of 6pm. Heading the bill will be the National Hot Rods in their penultimate World Qualifying Round, as well as 2L National Bangers, Superstox, Stock Rods and Reliant Robins.