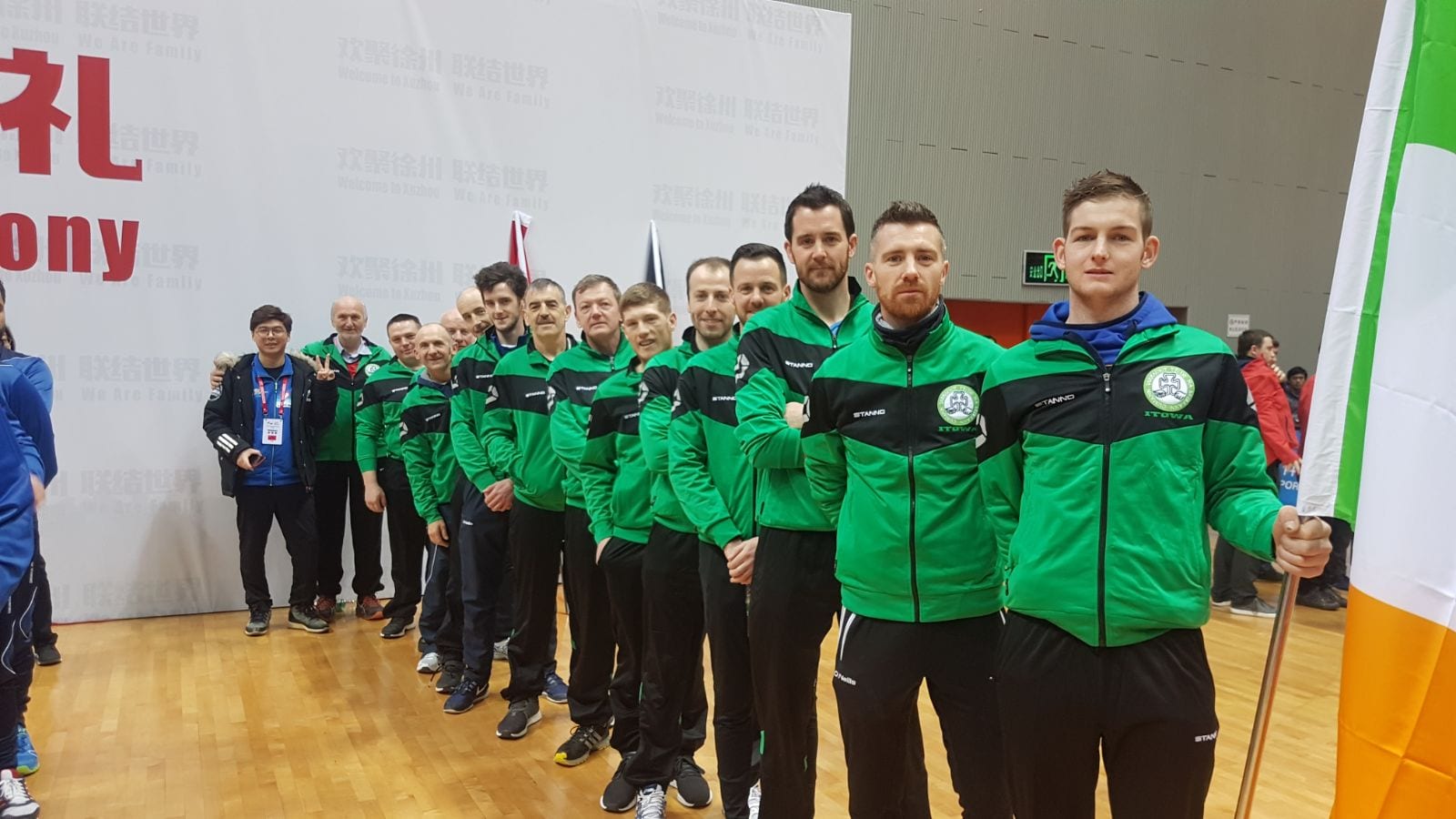 Local team St. Pats of Courtbane set off for the World Indoor Tug-Of-War Championships in Xuzhou, China with one goal in mind, to take the full complement of world senior men’s gold in play – the 560kg, 600kg, 640kg & 680kg.

St. Pats – a team from south Armagh and north Louth – sat as reigning world champions in three of the four weights after the last world championships in Volendam; they only missed out on all four on that occasion due to suspected cheating by other teams in the competition, so the goal of all four was also intended to right that wrong.

The squad of 14 pullers along with Coach Hugh Mór Conway set off on the Sunday before the World Championships to make the long and arduous journey to China, along with the support crew of Leo Conway, Brian McLoughlin and Kathleen Griffin.

After travelling for a day and 6000 miles, the St. Pats men had weight-loss to go through on Monday and Tuesday before their weigh-in on Wednesday morning. All the weight goals were made and then teams submitted in preparation for the first two days of International competition, the World Club Championships.

The exact same weights are contested in both. The club competitions have more entries due to the fact that each country can have multiple clubs entered, whilst in the international section, there is one representing team from each nation competing in a given category. There were over 100 Clubs from 20 Nations at these World Championships.

First up for St. Pats on Day One of the Championships was the Senior Men’s 560kg. There were two groups of 6 in this competition, with the top two teams from each group going through to the semi-finals. The top team from one group meet the team coming second from the opposite group. St. Pats topped the table with Da Benniu from Chinese Taipei coming second, and Gaztedi from the Basque Country came out on top in the other group, with Mountain View in second, setting up semi-finals of St. Pats V Mountain View and Gaztedi V Da Benniu. St. Pats continued in the same vein as they have all season and defeated Mountain View to take their place in the final, with Da Benniu handling Gaztedi in the other semi-final to follow them in. The final was a quick affair, as St. Pats powered through Da Benniu two straight ends to take the first victory of the championships, the World Club 560kg – the title they had stolen from them at the previous worlds and so a very sweet victory to open their World Championships with. The St. Pats 560kg team was Gary Conway, Hugh Óg Conway, Seán Conway, Michael Owen McGreehan, Liam Fitzpatrick, Gerald Porter, Tommy Griffin & PJ Griffin, coached by Hugh Mór Conway.

There was no rest for the St. Pats squad as the World Club 640kg Championships was called straight away. Four of the 560kg men were on this team also; Gary Conway, Hugh Óg Conway, Seán Conway and Michael Owen McGreehan, joined by Martin Shields, Warren Conway, Declan Griffin and Ciarán Fitzpatrick.

There was one group of 11 in the 640kg, so a very long competition for St. Pats, as there were 10 pulls in the group section. The group section is run on a round-robin basis, with each team competing against every other team in the group.The top four teams progress through to the semi-finals, with the top team meeting the team ranked fourth and the second and third teams meeting in the other semi-final. St. Pats again topped the group and met Lagerweij from the Netherlands in their semi-final, with Angangshiye from China meeting Monnickendam from the Netherlands in the other. St. Pats proved too strong for the Dutch men and progressed easily through to the final, where they met the Chinese team Angangshiye, who had beaten the other Dutch team in their semi-final. St Pats put on a demonstration of tug of war skill in their second final of the day and took the Chinese team across the line two straight ends to retain their title of World Club 640kg Champions.

Day Two of the Championship saw two more World Club Men’s Senior titles up for contention – the 600kg and the 680kg. The St. Pats teams for both these weights had again as their core Gary Conway, Hugh Óg Conway, Seán Conway and Michael Owen McGreehan.

The 600kg was up first and there were two group in this competition, St. Pats were in the larger group of 9 teams, with 8 teams competing in the other group. As with the 560kg the previous day, only the top two teams would make it through. The aim, as always, was to take top of the table, in order to pick up the team coming second from the other group. By the end of the group section, St. Pats came out on top, with the Basque team, Ibarra in their wake. In the other group, Tinto Farmers from Scotland topped the table, with another Basque team, Sokarri coming in second. St. Pats easily drove through Sokarri in the semi-final, to set up a final against Tinto Farmers from Scotland. Scotland is one of the top Indoor TOW nations, and so St. Pats knew that this may well be the toughest challenge they had faced in the Championships. Despite a very strong opposition from Tinto, St. Pats again proved to be a step above, and to the increasing amazement of the spectators, both present in China and across the globe via live-streaming, St. Pats took their third gold and World title of the Championship. The St. Pats 640kg team was Gary Conway, Hugh Óg Conway, Seán Conway, Michael Owen McGreehan, Martin Shields, Tom Griffin, Declan Griffin & PJ Griffin, coached by Hugh Mór Conway.

The last competition of Day 2 and of the World Club Championships was the Men’s 680kg. This was contested in one group and so, as with the 640kg the previous day, it was the top four teams who progressed through to the semi-finals. St. Pats continued the pattern of topping the table and were joined in the semi-finals by Deinum-Britsum from Netherland, Zuraide from the Basque Country and Ozoli-Velkonis from Latvia. St. Pats met the team from Latvia, who had finished in fourth position, while Deinum-Britsum met Zuraide in the other semi-final. St. Pats and Deinum-Britsum came out on top in their respective semi-finals to progress to the last final of the World Club Championships. St. Pats were not to be deterred from their goal, and Deinum-Britsum proved defenceless in the face of the Pats’ men’s sheer determination to complete the task at hand, and were dragged across the line two straight in times of 41 seconds for the first end and 21 seconds for the second. And so St. Pats took their fourth title of the World Championships, the World Club 680kg. The St. Pats 680kg team was Gary Conway, Hugh Óg Conway, Seán Conway, Michael Owen McGreehan, Warren Conway, Shaun Doherty, Ronan Casey & Ciarán Fitzpatrick, coached by Hugh Mór Conway.

This feat of taking all four World Club Senior Men’s titles has only ever been accomplished once before in either the indoor or outdoor codes, and it was in Cork 2002 and it was again by the St. Pats TOW Club. The most any other club has taken is two titles in one World Club Championships, St. Pats have taken all four twice now, and have also taken three of the four on two occasions, in Killarney in 2006 and Volendam in 2016.

St. Pats were not finished their Championships after these two days of winning form. The St. Pats men went on to represent Ireland in three weights – the 560kg, the 600kg and the 640kg, and took Gold in the 560kg, Bronze in the 600kg and a very close fourth in the 640kg. They were the toast of the World Championships and have again proven themselves to be the top tug-of-war club in the World by a clear margin.