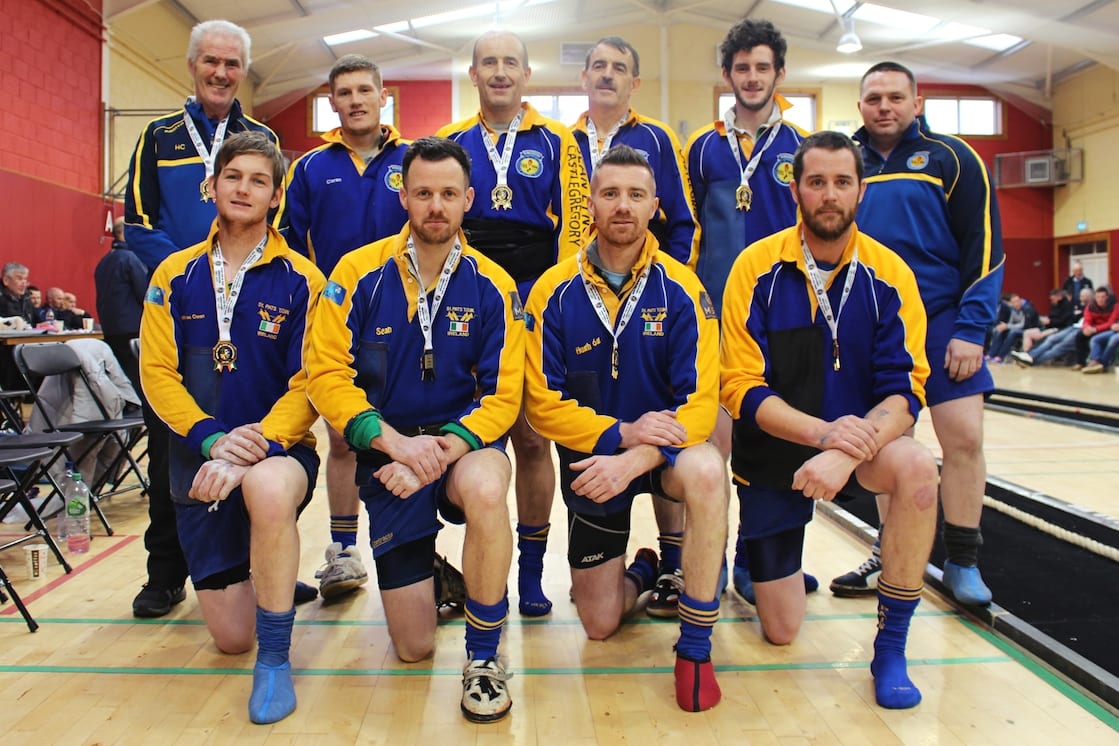 The Courtbane-based St. Pats team – which encompasses south Armagh and north Louth – were attending and hoping to continue a fantastic start to the season.

It was an early start for St. Pats as the squad headed to Derry on Saturday to go to the sauna to lose 20kg in weight across the eight-man team.

Over four hours after going into the sauna, it was a very weary looking St. Pats that carried-on on their journey to Buncrana for the Saturday night weigh in in advance of the next day’s National Championships.

The team was extremely relieved to step on the scale at exactly 600kg.

In the weigh-in for the 5-a- side National Championship, the 375kg A team made the weight but the second 375kg team – St. Pats B, had to go with Yvonne McEntee, one of the St. Pats women and a youth puller, Liam Fitzpatrick, along with their 10kg weight advantage, to get the team in at the weight.

This was Yvonne’s second time to pull with the senior men and it was Liam’s first senior competition. Eating, rehydration and an early night followed to prepare themselves for the day ahead.

Rockies from Cavan, Clonmany and Carndonagh from Donegal and Mountainview from Louth and St. Pats. Competition was pulled on the usual round robin basis and St. Pats, pulling with great strength and determination, won all four pulls 2-0 without ever really being troubled, to move through to the semi-finals.

St. Pats’ opponent in the semi-finals was Carndonagh, with Mountainview and Clonmany in the other semi-final.

When the dust was settled it was St. Pats and Mountainview in the final.

This final followed the pattern of the previous finals with as easy victory for St. Pats against Mountainview to make it four for four in the National 8-a- side titles for St. Pats.

Next up was the 5-a- side 375kg competition and here 7 teams took to the mats.

After the round robin section St. Pats A topped the table and were joined in the semi-finals by Carndonagh A, Carndonagh B and St. Pats B.

The semi-finals saw St. Pats A easily beat Carndonagh A 2-0 and St. Pats B beat Carndonagh B after an epic battle which was the pull of the day. The St. Pats woman, Yvonne McEntee and youth puller, Liam Fitzpatrick excelled themselves on this B team to get this hard-won and unexpected victory that saw them into the 5-a- side 375kg against the St. Pats A team.

The all St. Pats final fell as expected with the St. Pats A team proving a little too strong for the B team, and so it was the A team that took gold with the B team taking silver.

This was again in the pattern of the previous National 5-a- side Championships with St. Pats taking both gold and silver, a
mighty achievement.

Last weight down for decision was the Open 680kg competition and here pullers from the top N. Ireland teams were present and joining up with Mountainview to field a very strong team in an effort to finally beat St. Pats under the one banner.

However, this unified attempt was to no avail as St. Pats breezed through the competition with no problem, to beat Mountainview very easily and so concluded the day unbeaten.

Next up for the St. Pats pullers is the National 8-a- side 560kg and 5-a- side 350kg Championships being held in Edgeworthstown, Co. Longford on Sunday week and St. Pats will be going all out to finish the clean sweep of titles – 10 from 10, for the third year in a row.