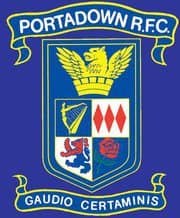 LEAGUE leaders Portadown welcomed Academy to Chambers Park on Saturday for the latest round of the Kukri Qualifying Section 1.

The home side were keen to continue to their unbeaten run whilst winless academy were hoping to pick up their first win of the campaign.

Playing into the wind it was the visitors who had the better of the early exchanges taking advantage of the home team trying to force the pace of the game.

Indeed it was Academy who registered the first points of the day on 12 minutes after Portadown strayed offside at a ruck. Academy out-half Chris Cooper stroked over an easy penalty from the edge of the 22m line.

The home side started to string some useful play together and it was David Busby who got the Ports off the mark scoring from a well run back move from a scrum.

David Whitten was just wide with the conversion leaving it 5-3 to the Portadown. Portadown were now starting to move through the gears and following some nice ball from the tail of the lineout Chris Cousens broke the Academy defensive line and rounded the full back to run in from all of 40 yards.

Whitten added the extras from under the posts to stretch the lead to 12-3 on the 30 minute mark.
Academy were frustrating home side with some great defensive work and especially at Scrum time where they managed to turn over their hosts on a number of occasions however were unable to translate their good work into points.

Portadown were on the score board again after 35 minutes. Gary Hall, normally a back row player but lining out at inside centre, made a fine break through midfield and offloaded to his centre partner Busby who again rounded the defence to score under the posts. Whitten added the extras to leave it 19-3 to the Ports at half time.
The score didn’t dampen the enthusiasm of the visitors who came out fighting in the second half. After some good interplay by backs and forwards their pressure paid off with a penalty under the Portadown posts which was converted by Cooper to leave the score 19-6.

It was only a matter of minutes again before Portadown presented another opportunity for Academy. This time going off their feet at a ruck.

Referee Robbie Watson awarded a penalty and the Cooper stepped up again to land a 40 yard kick to make it 19-9.

Inside a matter of minutes the Ports infringed again, this time the backrow straying offside from a box kick. Cooper continued his fine form with the boot to make in 19-12. He was on target again a number of minutes later and Academy were very much back in the game at 19-15.
The Home team responded quickly and after a number of good moves Chris Cousens spotted a gap in the Academy defence.

A well weighted chip was gathered on the full by Gary Hall and after a quick ruck, scrum half Whitten poked through a cheeky grubber kick and beat the defence to the line to score the home teams bonus point try.

Cousens missed with the conversion leaving it 24-15 to Portadown. The home team were hitting their stride now. Willy Graham stole a lineout ball and after several good carries by the forwards, Nicky Jackson pushed through a well weighted kick for his fellow winger Thomas Halliday to chase. Halliday was first to the ball and was on the score sheet for the second week in a row.

Cousens converted to make it 31-15. There was time for one final try at the death this time from Cousens who intercepted a loose pass to run in from 40 yards under the posts. Converting his own score to make it 38-15 to Portadown at the final whistle.

So Portadown remain unbeaten at the top of the league with a maximum points haul whilst Academy still search for their first win.