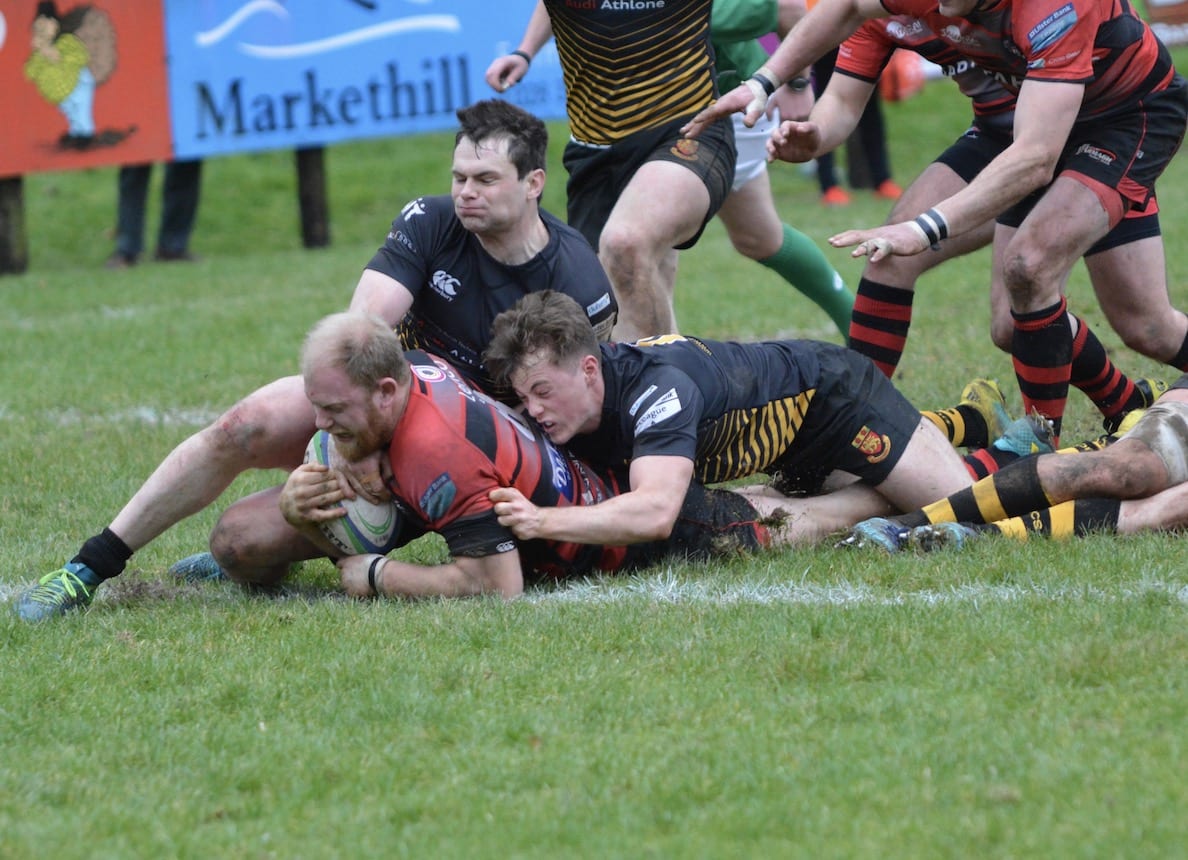 In a thrilling encounter at the Palace Grounds on Saturday, City of Armagh moved up to third place in Division 1B with a last minute try securing a bonus point victory over Buccaneers.

The home side were without Philip Fletcher, Robert Whitten, Daryl Morton and Ryan Purvis and the injury list grew longer when winger Andrew Willis limped off with only 5 minutes on the clock.

The home team started confidently, with Evin Crummie now on the wing, with good phases taking play into the Buccaneers 22. A home penalty was kicked to touch but the lineout maul went to ground. The ball was moved infield but the attack came to nothing with a penalty conceded for crossing.

Buccaneers overthrew their lineout but were sharper to recover possession and outhalf Luke Carty made a 30 metre break before putting a beautiful kick into the Armagh 22. The visitors had made 70 yards in 10 seconds, to send out warning signs that this Buccaneers side was a much changed outfit from the team that had lost the Bateman Cup semi-final.

The home side were stunned on 7 minutes when Buccaneers scored the first try of the match. Fullback, Callum Boland touched down following a 40 metre run that sliced through a static Armagh defence and Carty nailed the conversion for a 0-7 lead.

A knock on from the restart gave Armagh good field position and the Orchard County side exerted pressure forcing the visitors to
concede a penalty on their 22. Cormac Fox converted to make the scoreline 3-7. The visitors responded immediately, taking play down to the Armagh 22 and sustained pressure was rewarded with a second try for Buccaneers by number 6 Simon Meagher with only 14 minutes on the clock.

The first quarter came to a close with Fox kicking his second penalty following a break by centre Chris Cousens, to reduce arrears to 6-12.

With half an hour played, the game was to take a decisive turn. A penalty to Armagh saw the referee send Bucc’s Sean Matterson to the sinbin. Armagh then put together a sustained spell of pressure after securing their line-out, with Josh McKinley, Oisin Kieran and James Hanna driving forward and space was created for Neil Faloon to cross for an unconverted try in the corner. The
home team were back in contention at 11-12 and momentum suddenly switched to the Armagh side.

From the restart, Faloon burst through the Bucc’s defensive line making 20 metres. Hooker, Andrew Smyth was up in support and threw a long pass to winger O’Brien who sprinted for the corner before a cynical high tackle took him out. Another yellow card was produced and the referee awarded a penalty try.

Armagh now found themselves 18-12 ahead after the visitors had dominated a large part of the first half. More excitement for the home supporters was to follow before the break when captain Chris Colvin found space in a depleted Buccaneers’ defence to send
in winger O’Brien for a deserved score.

The conversion from Fox brought a great 40 minutes of rugby to a close and City of Armagh were in a strong position, leading 25-12 at the interval. The home side started the second half brightly, gaining a turnover from Buccaneers’ first attack.

Nigel Simpson, starting his first game for 10 weeks, made a line break, but a penalty conceded let Buccaneers clear the danger. Another couple of quick fire penalties gave the initiative to Buccaneers and only a foot in touch prevented a try for the visitors. A crooked line-out set up an attacking scrum and the well-drilled Buccaneers pack set up a try under the posts for number eight
Eoghan Matterson. Carty’s conversion reduced the gap to 25-19.

Despite this setback, Armagh won a turnover from the restart and brought play up to the Bucc’s 22. The home side’s accuracy then let them down. Firstly, a straightforward penalty was missed from 22 metres and then two attacking lineouts were lost.

To compound matters, the dangerous Kieran Joyce showed his pace to make 50 metres out of defence and play swung to the other end of the pitch. Armagh conceded a penalty and prop Paul Mullen picked up a yellow card. The visitors elected for a scrum and Eoghan Matterson got his second try of the day, which was unconverted, to put the match on a knife edge at 25-24.

With 65 minutes on the clock, Armagh returned to the attack and were awarded a penalty 35 metres in front of the posts. With spectators dumbfounded, Armagh kicked to touch and then lost the lineout. The script wasn’t going to Armagh’s favour when a counterattack by Buccaneers led to a penalty for the visitors and Carty made no mistake from 40 metres to put his side ahead 25-27.

The Connacht side had remarkably turned the game around and a tense final 10 minutes was on the cards.

Armagh kept possession well and went through the phases but little territory was being gained, with Bucc’s strong defence holding firm. The visitors won a penalty and put further pressure on the home side but Armagh held their line well to thwart the opposition.

With five minutes remaining, it was Armagh who were finishing strongly with Buccaneers pinned back in their 22.

A penalty to Armagh was kicked to touch as the home side didn’t want to risk a kick in the blustery conditions.

The pressure on the visitors mounted with another penalty conceded and the referee sent a third Buccaneers player to the sin-bin. With the clock almost on full time, Armagh gambled on a scrum and number eight Neil Faloon was the hero of the day when he picked up and drove over the line for the match winning try and his second of the game.

Fox converted and the referee blew for full time, kicking off celebrations amongst the large Armagh support.

Not only had City of Armagh won a nail-bitting match against a Buccaneers side with 6 players from the Connacht squad, they had achieved a bonus point win. In an extremely tight league, the 5 points elevated Armagh to third place in the league table.

The Armagh coaching team were delighted with the result. Willie Faloon commented: “That was a real rollercoaster of a match and our nerves were in bits but the guys showed real grit and determination to come good right at the death.

“We knew Buccaneers would be a massive challenge today and they will test every team in this league with performances like that.

“We have further injuries now but will have to regroup for this crucial phase of league matches.”

Next up for City of Armagh is a trip to Dublin on Saturday to play Old Belvedere.