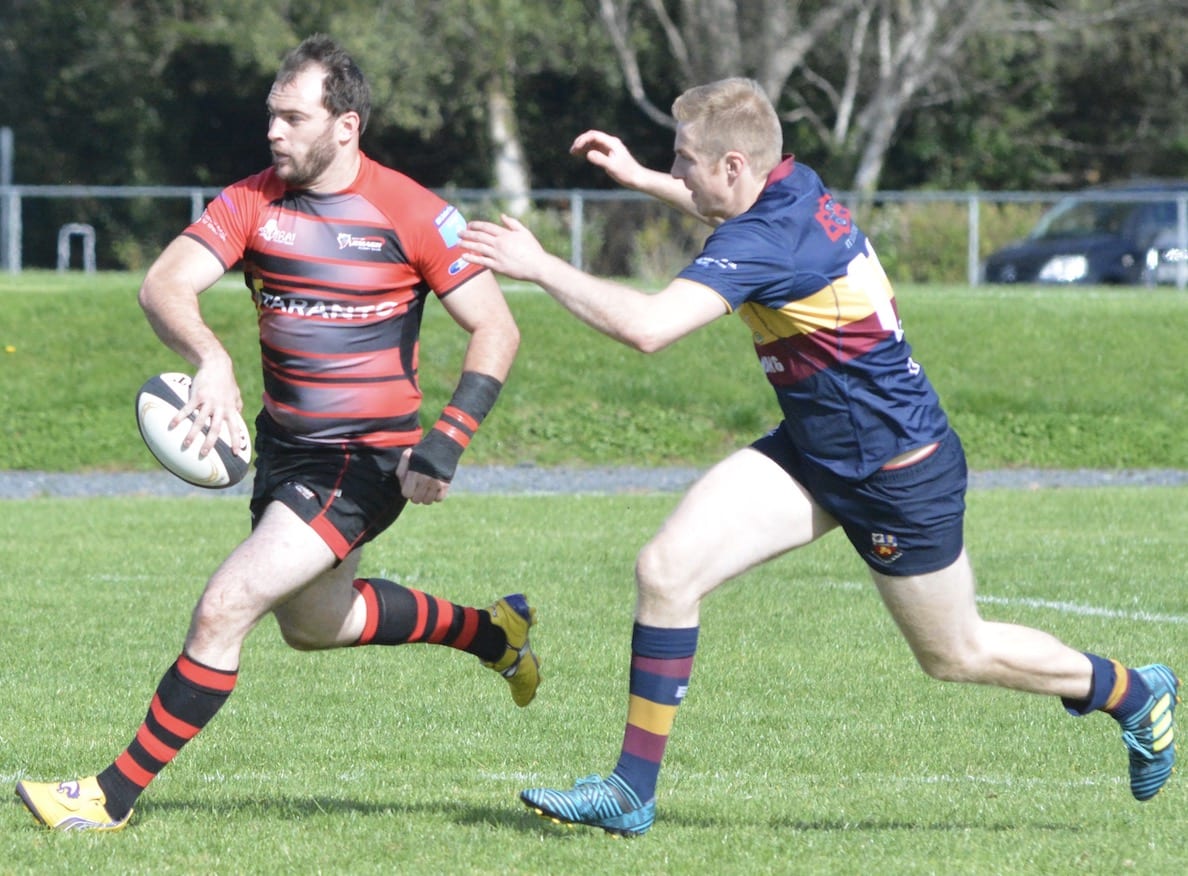 City of Armagh travelled to Ballymacarn Park on Saturday to play Ballynahinch for the first time ever in the All-Ireland League and were bitterly disappointed not to come away with a victory.

The Orchard County side were leading from the 5th minute but were denied by an equalising penalty from Hinch in the 4th minute of injury time.

Armagh kicked off in torrential rain which was going to make handling difficult throughout the match.

An early burst by prop Paul Mullen brought play into the Hinch 22 and the home side strayed offside. Outhalf Cormac Fox converted the penalty to put the visitors ahead 0-3.

On 15 minutes, Robert Whitten charged down a kick and stormed up the pitch into the 22.

Unfortunately Armagh then kicked away possession allowing HInch to clear the danger. The home side brought play into the Armagh half but were penalised for taking the Armagh full-back out in the air. The referee deemed it not a yellow card offence and Armagh kicked the penalty down the touchline.

A good attacking position was wasted with a loose pass thrown out the backline and Hinch almost hacked through, but the visitors recovered. Back in the Hinch 22, Fox put in a crossfield kick but his outside backs had strayed offside.

Armagh then stole a lineout but the touch judge pointed out foul play and Hinch looked to get a foothold in Armagh territory with the penalty but were unable to unlock the Armagh defence.

Winger Andrew Willis then grabbed an interception on halfway and stormed down the right wing.

The Hinch defenders managed to force him into touch on the 22 and the home side cleared the danger. With 25 minutes on the clock, a Hinch penalty on the halfway line saw Cairns go for the posts but his attempt was wide.

A series of knock ons by both teams in midfield disrupted the flow of the game and Robert Whitten sustained an injury and had to be replaced by Ryan O’Neill, making his senior debut for Armagh.

The visitors managed to win a scrum against the head and continued to enjoy the better possession in the first half. Despite the horrendous conditions, both sides continued to play attacking rugby with the visitors having another attack deep in Hinch territory thwarted by a knock on.

Hinch countered and looked to make a break through only for Armagh to turnover possession.

Winger Ryan Purvis made a half break on the left wing but was closed down into touch by a solid Ballynahinch defence.

The half time whistle went with City of Armagh still holding on to their narrow 0-3 lead.

Ballynahinch started the second half with more emphasis on a kicking game hoping for Armagh handling errors in their back three. Johnny Pollock and Timmy McNeice, returning from injury, took to the field for the visitors.

Conditions didn’t get any better in the second half and knock-ons by both sides blunted their attacking opportunities.

A period of aerial tennis brought neither an advantage but on 60 minutes Armagh had their best try scoring opportunity of the match. Armagh kicked into the Hinch 22 and the home side knocked on trying to prevent a lineout. From the 5 metre scrum, Armagh had the home pack in trouble and won a penalty.

A second scrum resulted in a second penalty as Armagh had the edge and following another scrum, Armagh attacked in front of the HInch posts.

Disappointingly, a handling error let the home side off the hook.

As the game moved into the final 10 minutes, Ballynahinch won three quick penalties as the Armagh support started to get nervous. The Hinch lineout however had been misfiring all day and they were not taking their opportunities. With five minutes remaining an Armagh attack was halted for a forward pass. With the game winding down Armagh unfortunately took wrong options and handed possession back to the home side.

In injury time Armagh stole possession and charge upfield only to be penalised on the Hinch 22. The home side then got their break-through on 84 minutes with the referee penalising Armagh for a ruck offence 30 metres in front of their posts. Aaron Cairns made no mistake with the straightforward kick and the match was tied 3-3.

The final whistle went with a huge sigh of relief from the Hinch supporters who couldn’t believe they
had managed to avoid defeat.

The Armagh supporters were gutted on what would have been an historic first win in Division 1B. The Armagh coaching team lamented poor game management throughout the whole match and particularly in the final quarter.

“We kicked away possession far too often on a day where conditions meant it was important to keep our hands on the ball” commented Willie Faloon.

“We are disappointed our inexperience cost us this victory today but hopefully we will learn from our mistakes as it’s still early days in this league”.

Next up for City of Armagh is a huge challenge when in-form Malone travel to the Palace Grounds on
Saturday with a 2.30pm kick off.