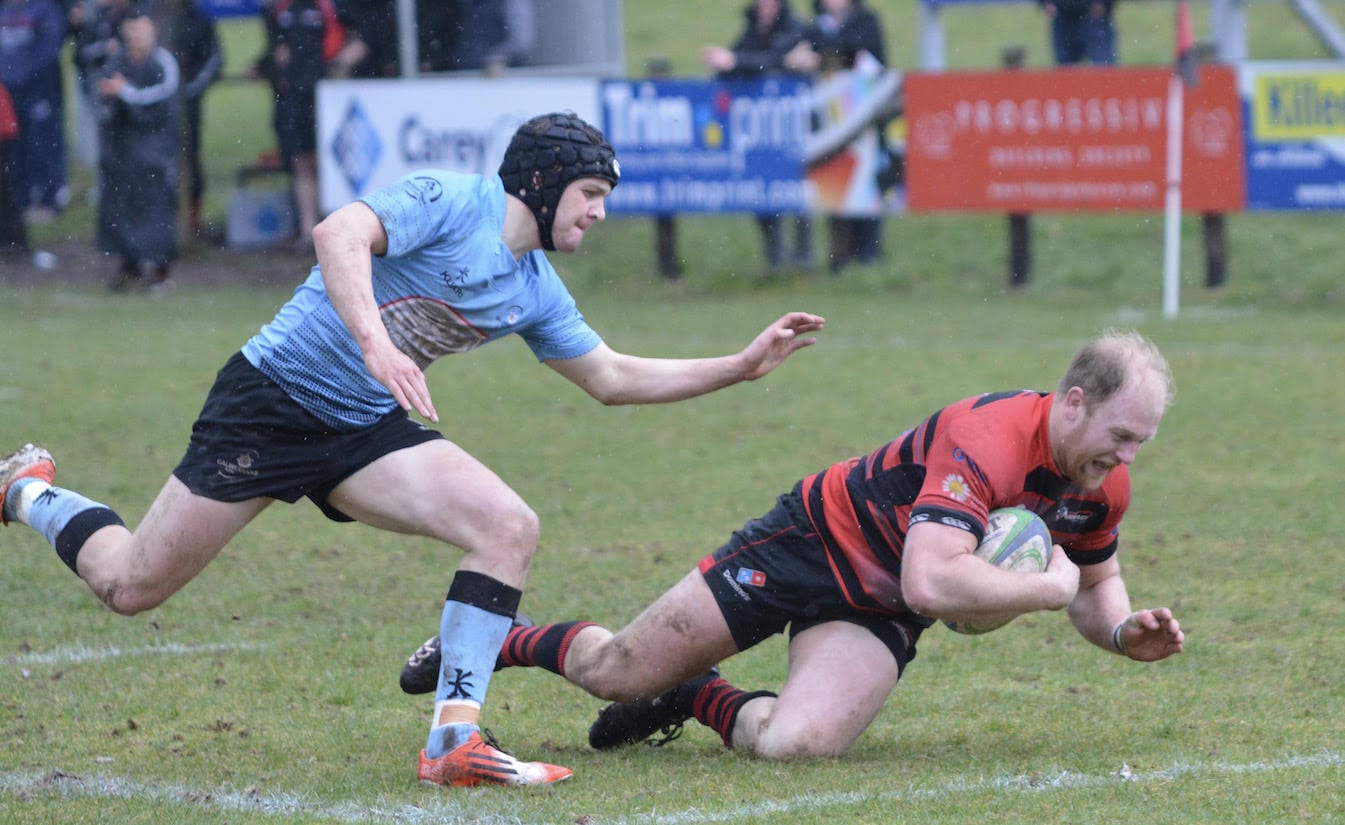 With two fixtures remaining, City of Armagh knew a bonus point win was essential to keep them in the race for a promotion playoff place when they faced Connacht side Galwegians at the Palace Grounds on Saturday.

In a high scoring encounter, Armagh slumped to a surprise defeat when the Galway side converted an injury time penalty to win 36 – 39.

In dry conditions, Armagh kicked off and got of to a perfect start with a try from full-back Evin Crummie after two minutes. Outhalf Cormac Fox slotted the conversion for a 7-0 lead.

The game had started at a high tempo with both sides keen to move the ball. On 13 minutes, Galwegians opened their account when a speculative kick saw a fortunate bounce reach the hands of their right winger who sprinted under the posts and the conversion by Morgan Codyre tied the game at 7-7.

Armagh responded immediately and scrum half TC Campbell chipped the ball nicely into the corner and Armagh secured the ball for hooker Andrew Smyth to touch down following a forward drive. An excellent conversion from Fox saw Armagh ahead 14-7.

The Galwegians backline looked sharp and on 22 minutes they cut through the Armagh defence to score another converted try and the match was tied again at 14 all.

The home side then had a spell of pressure in the Galwegians 22 and a penalty for offside was converted by Fox to edge Armagh ahead 17-14.

Centre Colvin broke upfield and brought play into the Galwegians 22 where Fox kicked cross field for Purvis to touch down.

The try however was disallowed and play was brought back for an earlier penalty to the home side.

A Galwegians lock was sent to the sinbin and Armagh looked to press home their advantage.

When the visitors knocked on a few metres from their line, Armagh got a drive on in the scrum and Galwegians infringed for the referee to award a penalty try and the Orchard County side now led 24-14.

From the restart Armagh conceded a penalty and Galwegians kicked into the corner. The line out was secured and Armagh were penalised again and a quickly taken tap resulted in a third try for the visitors reducing the gap to 24-19.

It was evident that the Galway side were determined to fight against possible relegation and were continuing to exploit weaknesses in Armagh’s defence.

Armagh won a scrum against the head on halfway and Galwegians had to scramble back in defence touching down for a 22 drop out. Armagh received the kick and Campbell fed number 8 Neil Faloon who went on a 60 metre charge to score under the posts. Remarkably the player had scored an identical try the week before against Blackrock.

The conversion from Fox stretched Armagh’s lead to 31-19 as the whistle went for halftime. Not for the first time this season Armagh started the second half by gifting the initiative to the opposition and Galwegians scored their bonus point try in the 43 rd minute. Armagh turned over possession when trying to play out of their 22 and Galwegians snapped up the turnover with delight.

The successful conversion brought the score to 31-26 with the home supporters getting nervous that Armagh’s comfortable lead was being clawed back by the visitors, largely due to errors from the home side. A scrum penalty to Galwegians added to the pressure, making the score line 31-29.

Armagh fought back with Neil Faloon and Josh McKInley carrying well into the Galwegians 22.

Fox moved the ball left and Crummie, now playing in the centre, crossed for a much needed Armagh try on 58 minutes. The conversion was missed but Armagh now led 36-29.

A series of penalties against Armagh gave momentum to the visitors as the game moved into the final quarter.

Armagh spurned another scoring chance when flanker Robert Whitten had a charge into the Galwegians 22 but his pass went to ground and Armagh were penalised at the breakdown allowing Galwegians off the hook.

With 10 minutes remaining, the visitors were still causing problems for Armagh who were playing too much rugby in their own half.

The inevitable happened when a clever chip over the Armagh defence saw Galwegians regain possession to send winger Bryan Dixon racing over for a try in the corner. A superb conversion by Codyre from the touchline levelled the match at  36-36.

Armagh had a final attack in the Galwegians 22 but poor decision making allowed Galwegians to bring play right up to the Armagh line and only a knock denied the Galway men a late try.

Armagh cleared the danger temporarily and with a minute left on the clock, a long range drop goal from Galwegians was wide of the posts. From the drop out the referee penalised Armagh for a deliberate knock on and Daryl Morton dispatched to the sinbin.

The Galwegians fullback made no mistake with the straight-forward kick and Galwegians had completed a remarkable comeback to win the match in injury time, 36-39.

Willie Faloon expressed his frustration after the match with his team’s second half performance and falling yet again in the final minutes of a match to both Galway teams. More worryingly for the coach was the leaking of 8 tries in their last two league games and the promotion playoff place is now out of Armagh’s hands.

On Saturday City of Armagh travel to a much improved Greystones team, requiring a bonus point win and other results to go their way.

On the upside it must be remembered this is the team’s first season in Division 2A and to be in the promotion mix is a fine
achievement.