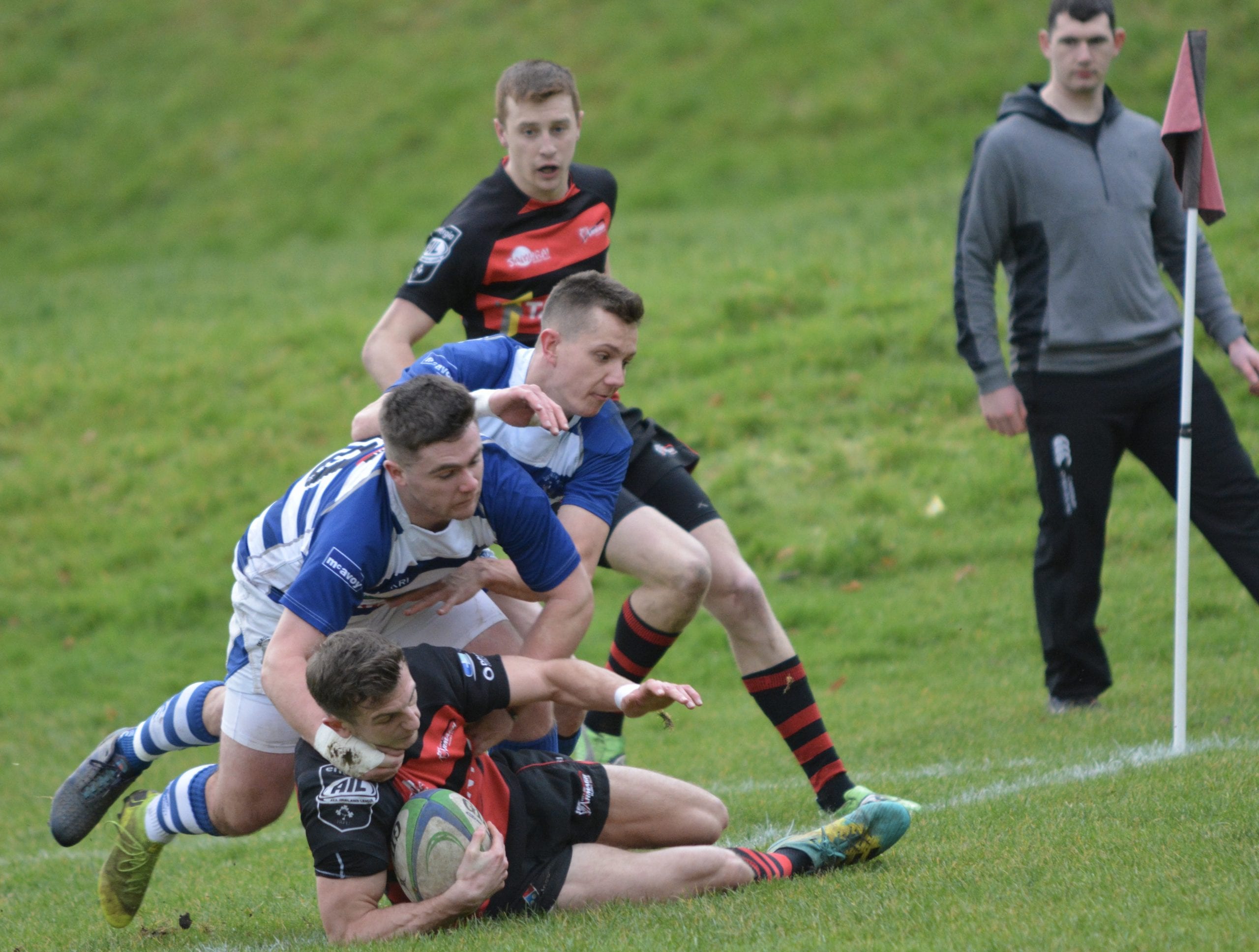 City of Armagh welcomed Dungannon to the Palace Grounds on Saturday for a SONI Division 2 fixture.

The home side showed 12 changes to the starting XV that faced Banbridge in their last outing, with the extensive squad rotation giving players a deserved rest.

Armagh started brightly and enjoyed the majority of possession in the opening stages. This period of pressure was rewarded with points when, from a scrum, the ball found its way to winger, Mervyn Brown who went over the line for a try from five metres out against his former club. Harry Boyd was unsuccessful with the touchline conversion.

The restart saw Dungannon gain possession and they put the Armagh side through a number of phases before the ball was stripped by Ollie Millar and the turnover ball was moved to the right wing where David Agnew took play deep into the ‘Gannon half.

The ball was quickly recycled and a delightful cross field kick from Timmy McNiece was collected by Glen Faloon and without breaking stride, the winger ran in down the left hand touchline for a superb team score. Boyd was successful with the difficult conversion and Armagh led 12-0.

Dungannon came back into the game due to errors from the home side and following a yellow card to James Morton. The visitors got their reward when they made the numerical advantage pay, when after a  number of missed tackles, Andrew Weir bundled his way over the line for Jordan McIlwaine to convert to make the score 12-7.

Dungannon enjoyed further possession and territory but struggled to break down the well organised Armagh defence. A loose ball was then gathered by Millar and he set off on a 60 metre break up the pitch, being dragged down five metres from the line. A penalty was then rewarded for the tackler not rolling away and Armagh had a foothold in the visitors’ 22.

Following a number of set pieces, the referee awarded Armagh a penalty try following an offence at a scrum as the home pack moved towards the line. The halftime whistle went with City of Armagh ahead, 19-7 at the break.

The second half was a drab affair with both sides struggling to get going, due to errors in phase and set piece play. Dungannon scored early in the half through scrum half John Russell with McIlwaine again converting and it brought the score to 19-14.

Dungannon applied a lot of pressure late on but a couple of steals at lineouts and some heroic defending saw the visitors repelled and the final whistle went with the final score 19-14 to City of Armagh.

Unfortunately whilst the conditions were well suited for running rugby, errors meant that the game never got into a flow but Armagh will be pleased with their resolute defence. They now need just one point from their rearranged match with Belfast Harlequins to win the SONI Section two title.

This Saturday, City of Armagh make the trip south to Dublin to face Lansdowne RFC in the semi-final of the Bateman Cup. Having lost in the final last season, the squad will be hoping to go one better this season, but will be clear underdogs against the Division 1A side.

It was not however all plain sailing for the Armagh men as Portadown upped the pace towards the end of both halves.

Playing with a stiff breeze, Armagh made a strong start and within two minutes hooker, Adam Edgar beat the Portadown defence with an impressive dummy and a sprint to the line. The conversion by Andrew Knipe, who ended the match with a 100% success rate from the kicking tee, gave Armagh an early boost and a 7-0 lead.

The second try followed penalties close to the Portadown try line when captain, Andrew Brady, went over in the corner. Again Knipe added the points.

Referee Shane Toolan was quick to penalise any infringements and on 25 minutes sent Knipe to the sin bin for a high tackle, but this did not impede Armagh who, after a period of stalwart 14 man defence, broke clear to the five metre line where Portadown conceded a penalty. This was quickly taken by Con Oliver with James Johnston and Gareth Megaw on his shoulder. Megaw secured the touch down for the first of his two tries, his second coming as a result of quick thinking by Andrew Winder from a penalty on the Portadown 22m line.

Armagh went off the boil for a period and let Portadown in for two tries to leave the halftime score, 26-10 in Armagh’s favour.

In response to a try by Con Oliver, Portadown came back with two converted tries to bring them within nine points at 33-24. Portadown had a stronger, more experienced, pack and took the opportunity in almost all penalty situations to call for a scrum rather than kicking to touch.

Armagh performed better in the lineouts, where Jack Gilpin was in control with Kurtis Sherry, Tim Henry and Archie McAlpine providing support.

A second try by Con Oliver and a final try from Winder ended the match with Armagh winning by 47-24.

Scrum half Trevor Girvan, wingers Adam Magowan and Dan Reynolds, Matthew Allen and subs Jack Chapman and Sam Shepherd added to an all round solid performance by Armagh but one that leaves room for further improvement, as they look forward to their next encounter with Omagh Thirds on Saturday at the Palace Grounds.