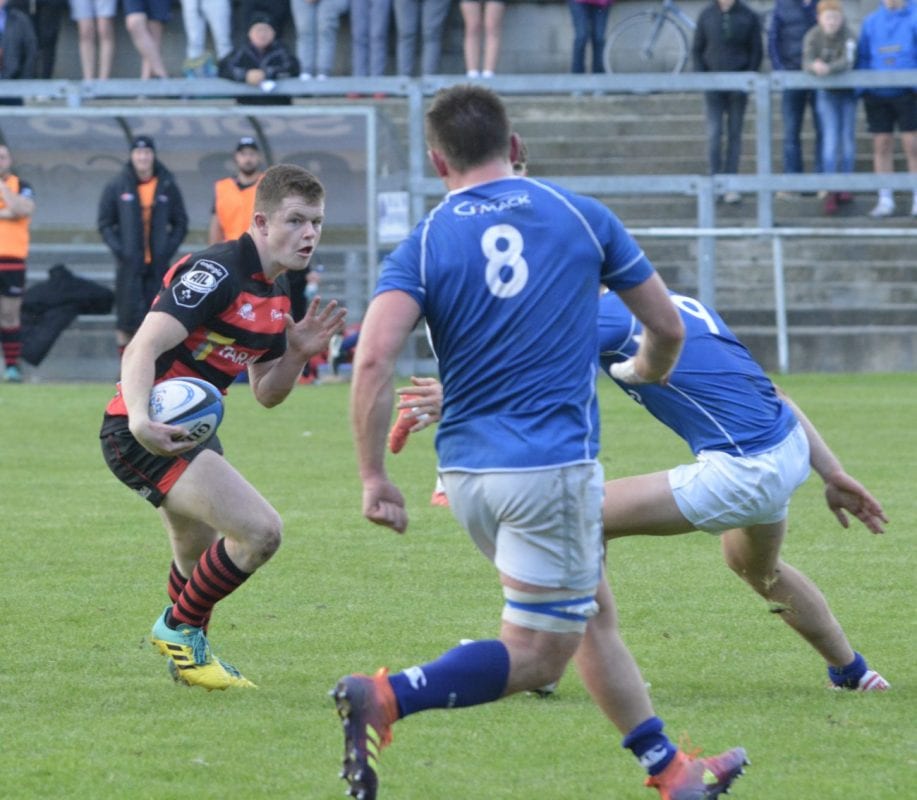 In dry but breezy conditions, City of Armagh kicked off at Donnybrook in Dublin looking to continue their recent good form with two wins from their last three outings.

The 4G pitch provided a startling contrast from the mud and rain of the previous weekend and ensured the match would be played at a high tempo.

It was City of Armagh who started strongly, pinning Wesley back in their 22 and the visitors could have scored two tries in the first ten minutes. With just five minutes on the clock, Armagh attacked in the left corner and had valid claims for a penalty try when Shea O’Brien was tackled high as he was about to touch down.

Cormac Fox kicked the penalty to touch and the line-out was secured to set up the forwards to drive for the line. O’Brien was then stopped just short of the line by the posts before Armagh recycled again. A knock on then allowed Wesley to relieve the pressure.

The home side then made their first foray into Armagh territory and won a scrum penalty following another Armagh handling error. Surprisingly the straightforward kick was missed and the match remained scoreless.

Old Wesley, having survived the early Armagh offensive, were now dictating play and gained a foothold in the opposition territory as the first quarter came to a close. The visitor’s defence however was well organised and able to cope with a number of Old Wesley attacks. With 25 minutes on the clock, Wesley were camped close to the Armagh try line.

The home pack had a series of pick and drives which Armagh defended resolutely and a 5 metre scrum was awarded to Wesley after they were held up over the line. The referee then awarded two scrum penalties against Armagh before awarding a penalty try to Wesley on 28 minutes.

Seven nil down, the visitors looked to respond and won a penalty which Fox kicked into the corner. The pack drove forward and then centre Evin Crummie was held up over the line. Wesley infringed at the resultant scrum and Armagh had the opportunity to set up a driving maul from the line-out.

This was executed well with the pack crossing the line only for Jonny Morton to be denied a try. The pressure continued on the home side and eventually it was centre O’Brien who crossed over for Armagh’s opening try which Cormac fox converted to level the game at 7-7.

Crucially Armagh knocked on the restart kick and Wesley used their scrum dominance to win a penalty in front of the posts. Amazingly they elected to kick into the corner with the first half coming to a close.

Wesley secured their line-out and drove for the line, Armagh defended well but the referee then awarded a penalty against Armagh for pulling the maul down. A yellow card was also shown to second row, Josh McKinley and the pressure mounted on the Orchard County side. Wesley elected for a scrum and magnificent defending by the 7 Armagh forwards held them out.

The ball was then moved swiftly to the right wing and it looked like Thomas O’Callaghan was set to stroll in for Wesley’s second try when the Armagh cover got across. The attack was thwarted and the heroic Armagh defence held out as the whistle went for halftime with the scoreline still level at 7-7.

Old Wesley restarted the second half and Armagh confidently played out of their half to reach the half way line. Both sides continued to be evenly matched as the pace of the game continued at a high tempo. A free kick to Armagh from a scrum, saw Timmy McNeice put a kick deep into the Wesley 22.

Bizarrely, Wesley took a quick throw in but were unaware Robert Whitten had followed up and the Armagh captain stole the ball to touch down for his side’s second try. Fox was unlucky to hit the upright with his conversion but City of Armagh were now leading 7-12 with 52 minutes gone. Buoyed by this score, Armagh then had a dominant spell with scrum half Harry Doyle making a 30 metre break in centre field. The ball was recycled and Shea O’Brien cut through at pace to head for the try line.

Unfortunately for the travelling supporters, the referee awarded a penalty to Wesley for crossing and the home side cleared the danger with a superb 60 metre touchline kick.

Armagh then stole the line-out and returned upfield to Wesley territory. The home side’s backline however were keen to counter at every opportunity and Armagh found themselves back in their own 22. Another scrum to Wesley close to the Armagh line and another scrum penalty. The referee then had no hesitation in awarding a second penalty try to Old Wesley. Given Armagh’s excellent scrummaging against Highfield, this was quite a mystery and a real blow. The home side now held a narrow 14-12 lead as the third quarter ended.

It was now the turn of Wesley to have a dominant spell and Armagh suffered a blow when Tim McNeice had to retire injured.  With just over ten minutes remaining Armagh looked to have a great chance of a third try when O’Brien made a 30 metre break deep into Wesley territory. Support arrived but the referee blew for a home penalty for holding on. Wesley returned to the attack but were unable to break the Armagh defence down.

With five minutes remaining Armagh had a line-out on halfway following a penalty. The forwards set up a driving maul and amazingly made 25 metres with Wesley in disarray. The maul was halted and the ball moved wide to Cormac Fox on the 22 metre line. The Armagh supporters called for a high tackle but the referee was not interested and awarded a penalty moments later to Wesley for them to clear to half way and the full time whistle blew.

A disappointing result for City of Armagh who felt they had enough opportunities in the match to have secured a victory. The two penalty tries for Old Wesley were decisive as they failed to break down a solid Armagh defence all day.

Two losing bonus points against the top two teams in the league ironically could have been eight points from both games. In a congested league table, City of Armagh remain in seventh place, four points above the relegation play off and four points from the promotion play off spots.

The Armagh coaches had driven straight to the match in Dublin from Ballymena, following the Royal School’s fantastic victory in the Schools’ Cup.

The result was not the one they would have liked but they praised the team’s performance and commitment against an Old Wesley side keen to remain in the promotion playoffs.

Next up for City of Armagh is another extremely tough fixture at home to high flying Shannon, who have moved to second position in the league table.

City of Armagh Thirds returned to second place in Provincial League 2 with a convincing bonus point win over Instonians Seconds at the Palace Grounds.

With players called up to the Seconds and others unavailable Andrew Brady called in players from the fourths for this return match against the same opposition as last week when Armagh knocked them out of the Crawford Cup.

Liggett blew the first to the final whistle. This was one of the most cohesive performance this team has put in since the start of the season.

Although the Armagh forwards struggled in the scrum against the heavier Instonians pack they were superb at the breakdown challenging for every ball and in the line outs hooker Tim Henry found the safe hands of Johnston and Gilpin every time.

Playing with the wind in the first half Armagh kept the tempo high and retained possession for long periods keeping the pressure on Instonians. Con Oliver led the pack with impressive carries and inspired the less familiar forwards Paddy Chapman, Mark Mildrew and Archie McAlpine to give 100% to the cause.

It was right winger Adam Magowan who got two early tries in the corner with speed and agility dumbfounding the struggling defence. These moves started with stand in scrum half Ruari Karlsen feeding the back line of Andrew Knipe, Nick Jennings, Dan Reynolds and Scott Armstrong with Brady coming into the line from fullback.

Instonians fought back with a try on 25 minutes and the first half finished with. 10-5 lead for the home side.

The second half started at a similar pace and it was not long before flanker Ross Finlay crossed the line, left of the posts. Although the conversion was missed a ten point gap was restored.

Nick Jennings played very well at centre and was rewarded with a bonus point fourth try under the posts for Knipe to convert. Although Instonians came back with a highly disputed try they were never going to beat this superior Armagh side with the final score line 22-10.

This was a great match to watch and with every Armagh player, including the substitutes, Rory McCreesh, Gareth Graham and Kurtis Sherry, playing with discipline and control. Using well drilled routines the win was well deserved.

The team return to action with a much anticipated home tie against City of Derry 2’s on 7th March.