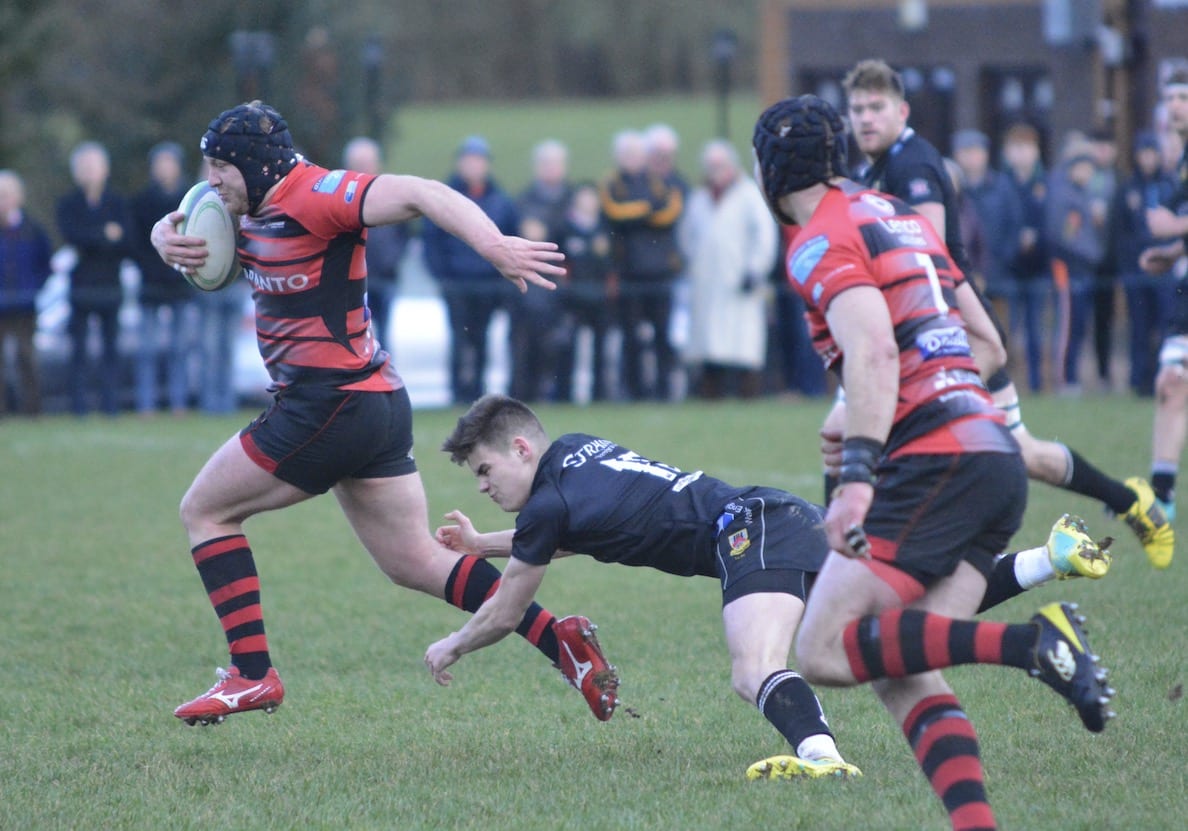 A large crowd of spectators turnout out for some festive fare when City of Armagh hosted Ballymena in their penultimate match in this season’s SONI Ulster Premiership at the Palace Grounds on Saturday.

With three defeats to date, the home side knew a win was essential to maintain any chance of remaining in section one.

Both teams were dramatically changed from their All Ireland league lineups and Armagh gave senior debuts to Jack Treanor, Ryan Morton and Luke Crozier. Just 9 of the 22 featured in the previous match at Banbridge.

Ballymena kicked off and it was the home side who took the early initiative with Tim McNeice and Neil Faloon featuring in early attacks. On 12 minutes James Morton made a line break and Andrew Smyth was up in support.

The ball was thrown away however with the opportunity lost to open the scoring. Following a charge by Ollie Miller, on his first appearance for the first this season, outhalf Cormac Fox put in a crossfield kick which winger Shea O’Brian latched on to to touch down for the game’s opening try. A fine conversion from Fox put Armagh ahead 7-0 after 15 minutes.

The home side spilled the restart and Ballymena launched an attack into the Armagh 22 and then the home defence strayed offside, Tim Small opened Ballymena’s account reducing arrears to 7-3.

Armagh then put a few attacking phases together but knock ons at key moments broke the team’s momentum. On 28 minutes a penalty for offside on the Ballymena 22 was kicked to touch and Stephen Morton secured possession.

The pack drove forward and Ollie Miller powered over for the home side’s second try. Fox’s conversion gave the home side a comfortable 14-3 lead.

A lack of concentration then let Ballymena in for a try just before the half time interval. Winger Jack Lewis chipped into the 22 and won the race to touchdown. The conversion by Small had Ballymena right back in the
match at 14-10 as the whistle went for halftime.

Armagh kicked off the second period and Ballymena coughed up possession to set up a home attack.

Kicking a penalty into the corner gave the forwards a chance to drive for the line. In was on the second attempt that Neil Faloon did cross the tryline and with 5 minutes of the second half gone, Fox’s conversion had] Armagh well ahead at 21-10.

Unfortunately the home team never scored another point and it was Ballymena who took the initiative for the remainder of the game.

The game became scrappy with most of the action in midfield and peppered with handling errors from both sides.
On 65 minutes pressure from Ballymena paid off when another chip into the Armagh 22 was poorly defended and Conor Smyth touched down for a converted try bring the score to 21-17.

With the match coming to a close the inexperienced Armagh team were still turning over too much possession and this was to be their downfall.

A foolish penalty was conceded by Armagh on the halfway line in the 77 th minute. A great kick into the corner set up a final chance for Ballymena to steal the match and the Eaton Park pack secured possession. A clever chip yet again into the Armagh 22 saw substitute Liam McGookin score the crucial try to edge Ballymena ahead 21-22.

Tim Small was in fine kicking form and he nailed a superb conversion from the touchline to add the points for a 21-24 lead. With injury time remaining, the Ballymena pack kept the ball to wind down the clock and victory was secured when the final whistle went.

A final score of 21-24 meant SONI League champions had lost all four games and will play in section two next season. The coaching team were disappointed the side had lost a match they had been in charge of for long periods.

Lessons will be taken but our priority of course remains the All Ireland League and the Senior Cup, commented Willie Faloon after the match.