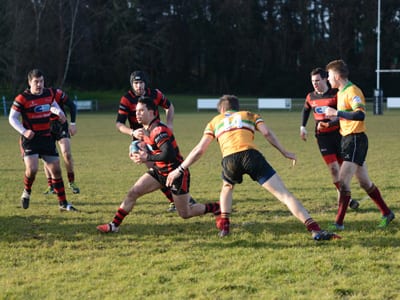 With the Arctic weather figuring so strongly in the past week’s news it was doubtful if the fixture against DLSP would even be played.

However, the team headed south to county Dublin knowing that they simply had to return North with a win or forget about attaining the top four league position by the end of the season! After their poor performance, last week, against Sundays Well they had slipped from third league spot down to sixth.

To a man, the whole team knew that they had underperformed and were all keen to reassert their match winning form.

The De la Salle Palmerston grounds were in Kilternan, in the foothills of the Wicklow mountains. This location certainly meant that the prevailing biting cold North-easterly chill factor would figure on the players and spectators alike.

The Armagh team played the first half with this cruel wind at their backs and from the kick-off it was immediately apparent that it certainly would have a dramatic effect on the game result!

Andrew Magowan opened the score with a penalty kick but the advantage was short lived when the home team replied to even the score at 3-3. Armagh were seen to dominate all aspects of the game at this stage but seemed unable to capitalise on their prowess.

The visiting backs looked, by far, to be the more dangerous but handling errors due, no doubt, to the cold conditions prevented them posting points on the board. That was until winger, Andrew Willis, stormed down the right wing rounding several defenders and set the ball up for Stephen Morton to touch down Armagh’s first try. Magowan’s conversion opened out the lead to 3-10 which remained until the half-time break.

With the wind at their backs and the benefit of the home venue the DLSP side became alive and all the more dangerous. They began to threaten Armagh in all aspects of the game. Armagh’s one venture into the oppositions 22 did result in points when James Morton charged down a box kick and sent Phillip Fletcher over for a try.

Again Magowan was on form with the conversion to open out the score to 6-17. The home side had now become alive and spent the rest of the game inside the Armagh half. Indeed, they seemed more ready to take advantage of the wind and repeatedly sent Armagh back into their red zone with punishing touch kicks.

Two penalty kicks from Kevin Burke closed the score to 12-17 and after several sin binnings on both sides a nail biting final ten minutes saw Armagh scrape through with a narrow win!

The win did earn them the vital four points and restored them back to third spot in the league. It was certainly a very difficult win and in the end they were probably the better side but at this stage of the season Armagh can certainly make life difficult for themselves!

Next Saturday sees no game but they entertain Queens University at The Palace Grounds on 14th February in the Ulster Senior League. It was rewarding to get the news via Twitter after the game that, yet again, all the Armagh teams won their games. That is the third time that has been the case this season!