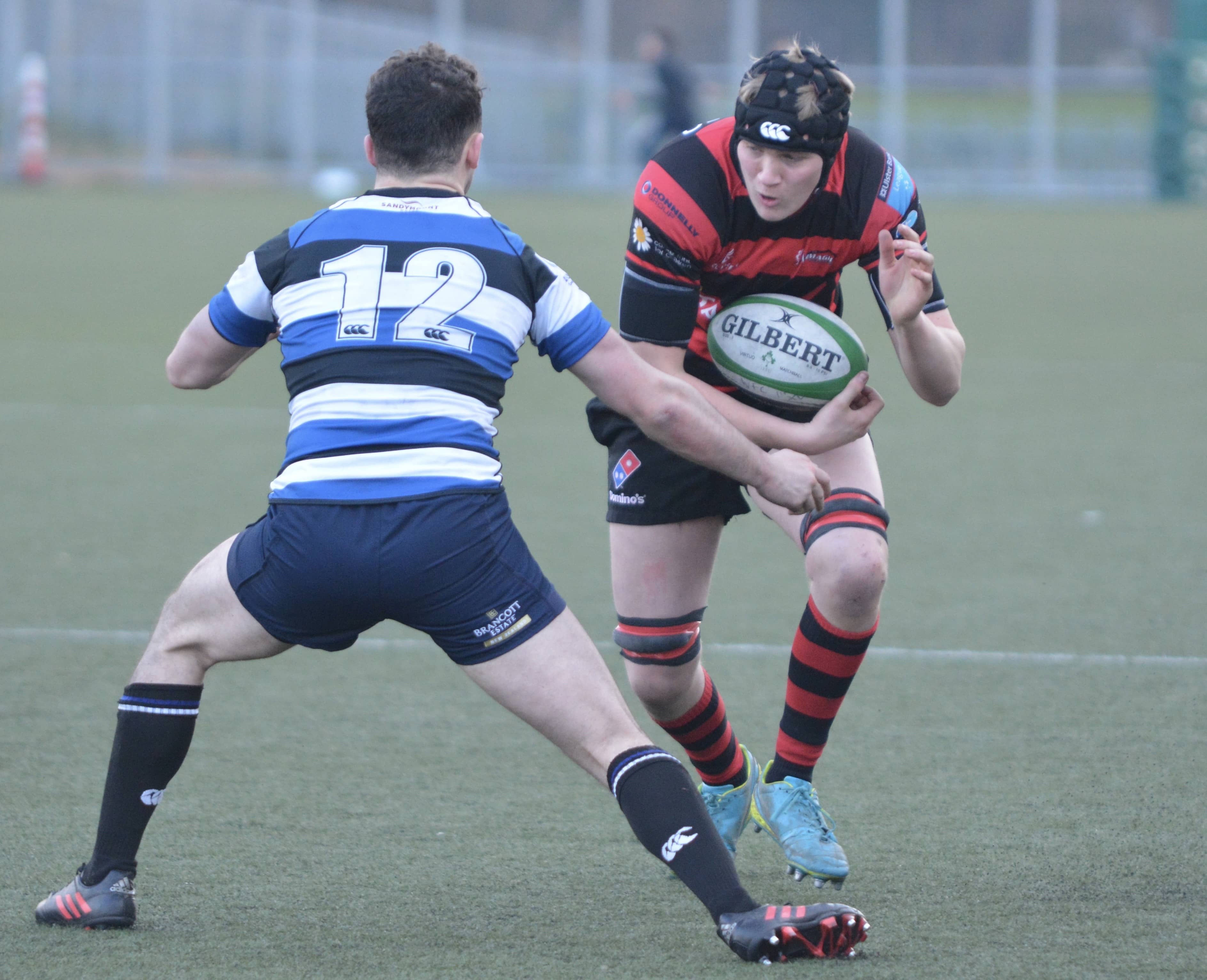 Armagh travelled to Dublin to play Wanderers on the back pitch at the Aviva Stadium to kick off part two of their All Ireland League programme.

Unfortunately for the visitors, it was the home team who played to their strengths on the plastic pitch, winning 23 – 14 and ending Armagh’s 21 week unbeaten run this season.

On a chilly, crisp afternoon, Wanderers kicked off and an early penalty saw Armagh take play in to the Wanderers half. The home team were penalised for not rolling away in the tackle and outhalf Cormac Fox opened Armagh’s account for a 0-3 lead.

The visitors were contributing to the fast pace of the match and centre Harvey Young made a stunning 40 metre run into the Wanderers half. Unfortunately the break ended with a penalty to the home side when the referee judged on an illegal hand off which also merited a yellow card.

Down to fourteen men, Armagh should have stretched their lead when Ali Birch broke away and fed the supporting Chris Colvin. The scoring pass to Willis did not go to hand and an opportunity was missed.

Wanderers seized the initiative and a couple of penalties brought play into the Armagh 22 and full back Niall O’Donoghue crossed for a try converted by Ciaran Wade to give Wanderers a 7-3 lead.

Young returned to the field but Wanderers were playing some great running and off-loading rugby. The visitors were penalised again and a successful kick from Wade put the home team ahead 10-3.

A penalty from Fox reduced Wanderers’ lead to 10-6 but not for long as the home team kicked a further 3 points to edge ahead 13-6 as halftime approached. A quick lineout from Armagh led to another attack by the visitors with James Morton leading by example. Wanderers transgressed on their 22 and Fox converted his third penalty to make the score 13-9 as the half time whistle blew.

The second half commenced and Wanderers were still dictating the pace of the game with their expansive style of play. It was remarkable the home team barely kicked the ball for most of the match.

Armagh were finding it hard to keep possession and penalties from both sides made play disjointed. Armagh winger, Willis was yellow carded and Wanderers kicked a penalty two minutes later to stretch ahead 16-9.

With 20 minutes remaining and Armagh on the back foot, Wanderers scored a second try when second row Harley Murray burst through some weak Armagh defence. The successful conversion gave the home team a comfortable 23-9 lead.

The visitors however lifted their game and an Armagh penalty was kicked into the corner. A forward drive was illegally stopped by Wanderers and their number seven was sin-binned. With the extra man, Armagh elected for a 5 metre scrum but their drive to the line again saw Wanderers penalised. A third scrum saw a third penalty to Armagh but still no penalty try. A silly knock on then let Wanderers clear their line.

With ten minutes remaining, Armagh gave themselves a lifeline when winger Ryan Purvis received the ball on the Wanderers’ 10 metre line and he scorched down the wing to touch down by the corner flag. The difficult conversion was missed and a 23-14 scoreline meant Armagh were still without a losing bonus point. The visitors pressed for a score as the clock ticked down and a Wanderers winger was sin-binned for killing the ball. It looked like the home team were going to hold the visitors at bay and that was the case when the final whistle sounded.

The huge Armagh travelling support were disappointed in defeat but all agreed Wanderers had been the better team on the day.

The Armagh coaching staff were disappointed in the team’s flat performance that failed to match the intensity from Wanderers, but will be glad of a home match this Saturday to allow the team to bounce back. Greystones will be the visitors to the Palace Grounds and a titanic first versus second battle is on the cards which will have a massive influence on the destiny of the league title.

Picture: Josh McKinley on a charge in the second half.