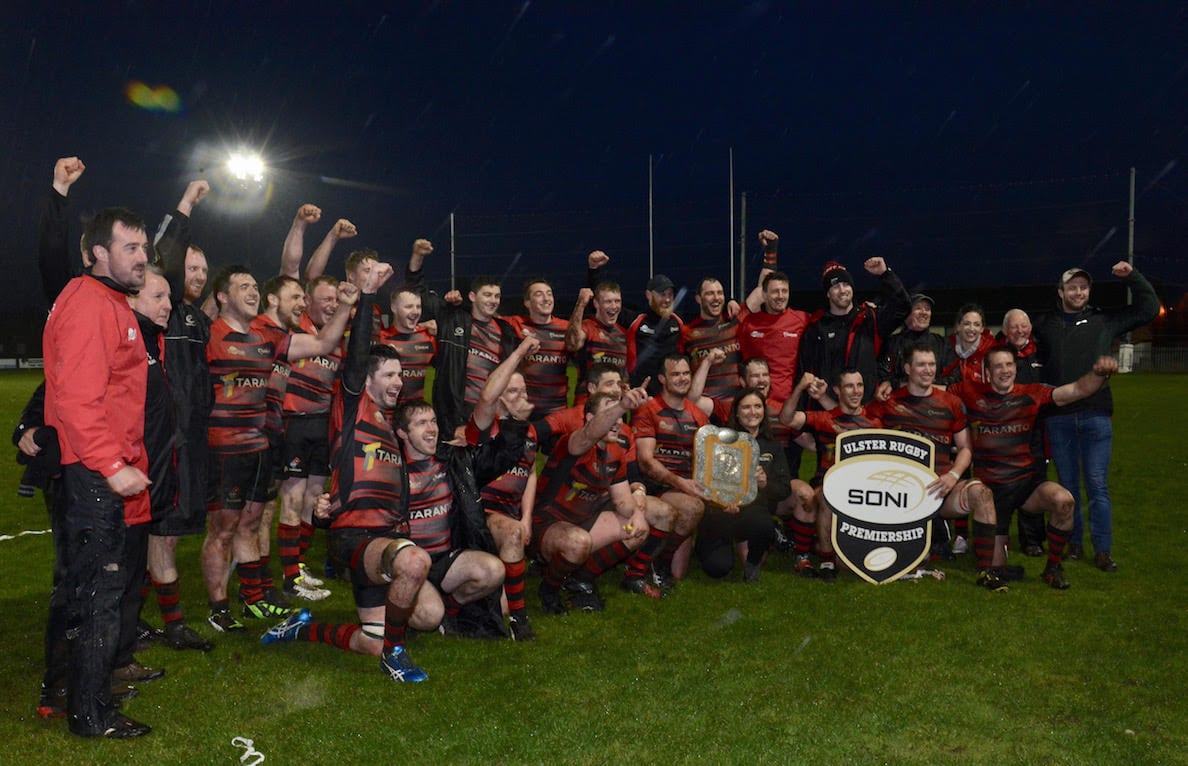 City of Armagh travelled to Gibson Park in Belfast last Tuesday to play Malone RFC in the decisive match to determine the winner of the SONI Ulster Premiership League.

Malone required a bonus point win and for Armagh to receive zero points for the home team to take the Stevenson Shield away from the holders, Armagh. Armagh on the other hand needed one point from the game to retain the trophy they won for the first ever time last season.

Following just three days from their epic promotion winning game against Nenagh Ormond on Saturday, the Armagh team would have been disadvantaged and both Neil Faloon and Peter Starrett were absent from the teamsheet. Indeed, coach Willie Faloon used his bench players to start the game against Malone who were missing their Ulster Academy players.

Conditions in Belfast were wet and windy as Armagh kicked off with the wind advantage. It was the home team who took the early initiative and took play into the Armagh 22. On 10 minutes winger Nathan Brown made a decisive break and off-loaded to full back Mark O’Connor to score under the posts. The try scorer converted his own try to give Malone an early 7-0 advantage.

A second try looked on the cards when the Malone backline moved the ball swiftly left, but the final pass went in to touch, letting Armagh off the hook. Shortly after, a loose ball in midfield was kicked into the Malone half and Daryl Morton led the charge only for Malone to rescue the situation by conceding a 5 metre scrum. Armagh put pressure on the home team and a number of drives went close before winger Andrew Willis was forced into touch a metre from the try line.

Armagh stole the Malone lineout and the forwards pressed again for the opening Armagh score. The try they deserved did arrive on 23 minutes when number eight Robert Whitten broke through a couple of tackles to score to the right of the posts. Outhalf, Cormac Fox converted to tie the match at 7-7.

Armagh then knocked on from the restart and Malone gained territory which they took advantage off. A scrum penalty was kicked to touch as the home pack looked to drive over. A knock on let Armagh clear the danger but the home team continued to pose a threat to the Armagh defence which was holding firm. Fox then kicked a monster 70 metre kick from his own half right into the Malone 22 to put Armagh in a great attacking position.

Malone made a good exit but the visitors were awarded a penalty on 35 minutes and Andrew Smyth broke free but the advantage was not played.

The kick to the corner paid off for Armagh when their pack put sustained pressure on the Malone try line with a number of pick and drives. The ball was then spread wide and Andrew Willis crossed for a trademark try in the corner. Cormac Fox then kicked a remarkable conversion in the swirling wind to put Armagh ahead 7-14 as the whistle went for halftime.

Armagh started the second half in determined fashion and an early penalty was kicked to touch. The ball was secured and the pack drove right up to the Malone try line with an Armagh try looking imminent. Malone held firm and a knock on by Armagh let Malone off the hook as they cleared their line. Winger Ryan Purvis then looked to have a chance to score out wide during sustained Armagh pressure. The visitors however were not rewarded with their third try due to inaccuracy. On 50 minutes, Evin Crummie and Stuart Hooks accidently collided and both left the field, replaced by Josh Kennedy and Jonny Pollock.

Malone then had a 15 minute spell of pressure where they dominated and pinned Armagh back in their half. A line break from winger Campbell looked set to produce a try but the supporting player knocked on and Armagh had another let off. Armagh were defending well as Malone threw everything at the visitors.

Their dominant scrum then delivered a penalty try on 75 minutes and the match was tied again at 14-14. With time running out and torrential rain falling, it looked unlikely Malone were going to get the 4 tries they needed. With 2 minutes remaining, Armagh turned over Malone in their 22 and Andrew Smyth burst through the middle of a ruck to score under the posts. Fox converted to put Armagh ahead 14-21 and surely the Stevenson Shield would be staying at the Palace Grounds.

Remarkably it was Armagh who almost got a bonus point score in the final seconds but a forward pass denied Willis the fourth try. Deep in injury time the referee produced a yellow card for each team after a flare up but the final whistle went soon after which signalled a victory to the visitors, City of Armagh, 14-21.

The visiting supporters were delighted as Ulster Branch President Graffin Park presented the SONI Premiership trophy to Armagh captain Chris Colvin. The team celebrated a league and cup double plus promotion to Division 1B of the All Ireland League, making it a season to remember.

The Armagh coaching team were delighted the team had won the League title undefeated, following on from last year’s success. “The boys were terrific tonight and showed a lot of energy despite Saturday’s playoff final” commented Willie Faloon.

“Our defence was good tonight as Malone put us under a fair bit of pressure and it was great we took our scores so well”.

Club President John Lennon commented: “This double achievement is remarkable for our club as we don’t have any Ulster academy player to bolster our resources. Every team in our club has had a successful season and we hope to build upon our success next season with the new challenges ahead of us.

“The coaching and management teams deserve great credit and of course the commitment and dedication of our players reaped the rewards they have achieved.”