Following their last minute defeat to Old Belvedere in their last outing, City of Armagh returned to winning ways with a workman-like performance, securing victory at Navan in difficult conditions.

The home side kicked off with heavy rain falling and the large Armagh travelling support were not going to get a repeat of the entertaining, free-flowing rugby they had witnessed at the Palace Grounds. Armagh made a confident start and with just three minutes on the clock, were unlucky not to score the game’s opening try.

Full back Tim McNeice brought play up to halfway and Neil Faloon spotted space to break from the ruck. The number eight charged for the tryline but was hauled down just a yard short. Armagh looked to recycle quickly, but a knock on a couple of phases later let Navan off the hook and they cleared the danger.

The home side then took play into Armagh territory but the visitors created a turnover and JJ Scheepers made good yards. Armagh captain, Robert Whitten then had to leave the field with an injury and James Hanna joined the back row. With 20 minutes on the clock, Armagh kicked a penalty down the line and set up a good attacking phase.

The wet conditions led to a handling error and Navan cleared from a scrum in front of their posts. McNeice kicked well into the corner and Armagh stole possession from the Navan lineout to keep the pressure on the home side. Armagh opened the scoring on 25 minutes when a penalty for the visitors was converted by Cormac Fox.

Armagh’s Shea O’Brien then had to leave the field for treatment and Josh Morton took his place on the wing.
A kick charge down from the restart could have been costly but Armagh managed to recover possession and clear to their 22. The opposition lineout was poached again and Scheepers and Faloon combined well to take play up to halfway.

Navan then won a turnover and a scrum penalty to put pressure back again on the visitors. A knock on ended the Navan attack and Armagh got themselves well into Navan territory where the referee penalised Navan for not rolling away. Fox converted the kick and Armagh led 6 nil with just five minutes of the half remaining.

In the final minute Navan’s hefty pack shunted the Armagh scrum backwards and secured a penalty five metres inside the Armagh half. The attempted kick was well off target and the halftime whistle went with Armagh still ahead 0-6. The visitors had dominated territory and possession in the first period and a good defensive display had negated the Navan attack. 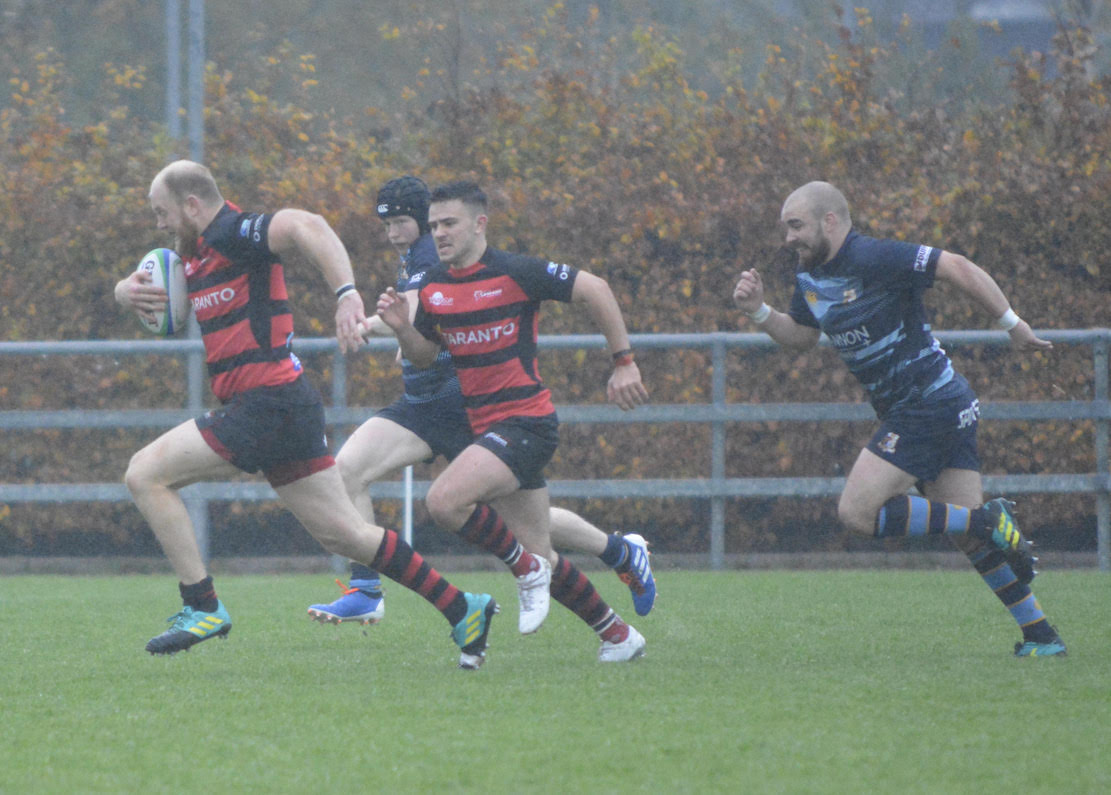 Neil Faloon makes a break in the first half

The second half commenced with the Navan side on the front foot, using their powerful forwards to drive hard and then seeking to spread the ball wide to stretch the Armagh defence.

Momentum then swung to the visitors with a penalty on halfway which the referee, following dissent, added on 10 metres. Fox put in an excellent 45 metre kick to increase Armagh lead to 9 nil after 46 minutes.

Navan’s restart failed to make 10 yards and Armagh won a penalty from the resulting scrum. Daryl Morton and Jack Treanor added fresh legs in the front row, as the visitors continued to have the upper hand.

On sixty minutes, another scrum penalty to Armagh saw Cormac Fox kick his fourth successful penalty and Navan were now 0-12 in arrears.

The home side looked to respond and penalty for a high tackle saw Chris Ebeling kick deep into Armagh territory. The Navan pack, led by Conor Ryan setup a powerful maul and the home side enjoyed their best attacking spell of the game.

Winger McEntagart threatened the Armagh line but the visitors were putting in an impressive defensive display and held firm. A penalty against Navan allowed Fox to kick to halfway but Navan secured their lineout and fullback Christian Byrne made a searing break. With one defender to beat, Armagh’s McNeice put in a try-saving tackle to extinguish Navan’s hope of getting on the scoreboard.

Armagh’s back row had to work hard in the wet conditions.

With 10 minutes remaining, Josh Morton intercepted a Navan pass and popped the ball to Shea O’Brien. The young winger however lost his footing in the wet conditions and it looked like the match was going to finish tryless.

As the game headed towards full time, Alex Johnston was introduced at scrum half for his senior Armagh debut and it was the visitors who finished the match strongly.

With Navan pinned back in their 22, Armagh set up a driving maul from a lineout that was stopped just short of the tryline. Navan were penalised again and the visitors elected for a scrum. The pressure on Navan mounted as the Armagh scrum headed for the tryline, and the referee awarded a penalty try.

The final whistle went and City of Armagh had run out comfortable winners 0-19.

Following the match, the Armagh coaching team were delighted with another AIL victory on the road. Chris Parker commented: “Navan is a very tough place to come and get a result. Their well-drilled pack made it a tough encounter and in the wet conditions I though our guys were outstanding with our strong set piece today setting up the platform for victory.”

City of Armagh’s third victory in four games, sees them rise to third place in the league table.

The Orchard County side now face another formidable encounter this Saturday when they travel to Limerick to play Shannon.