City of Armagh hosted Omagh Academicals on Saturday in their second fixture in the SONI Ulster Premiership and in a high scoring, entertaining match, secured a bonus point win to remain top of Section Two.

The home side got off to a perfect start with a try after three minutes. Omagh had kicked off in ideal conditions and following a turnover, centre Shea O’Brien made a break into Omagh territory. The ball was recycled wide to winger Andrew Willis who was stopped just short of the line.

Prop, Eoin O’Hagan was up in support to cross from close range. The conversion was unsuccessful but Armagh continued to build on their bright start with a second try on eight minutes.

A chip behind the Omagh defence by outhalf Johnny Pollock bounced fortuitously into the hands of Evin Crummie who touched down. O’Brien kicked the conversion and Armagh were ahead 12-0.

A great first quarter by the home side saw a third try when Crummie created space for winger Dylan Nelson score on his first xv debut, making the scoreline 17-0 in Armagh’s favour.

The visitors did rally and a break on the left wing almost led to a score but a foot in touch resulted in an Armagh lineout.

Omagh gained possession and had a spell of pressure close to the Armagh line but a knock on let the home side clear the danger.

Approaching the half hour mark, Armagh made a return to the Omagh 22. Nigel Simpson went close before the visitors were penalised and O’Brien made no mistake from in front of the posts.

Omagh looked to get on the scoresheet before halftime and kicked a penalty into the corner. Armagh disrupted the lineout and the halftime whistle went with City of Armagh holding a comfortable 20 nil lead over the Tyrone visitors.

The second half kicked off and it was Omagh who got off to a quick start with a try on 43 minutes. Armagh’s defence parted like the Red Sea allowing second row Sproule to sprint from the halfway line. 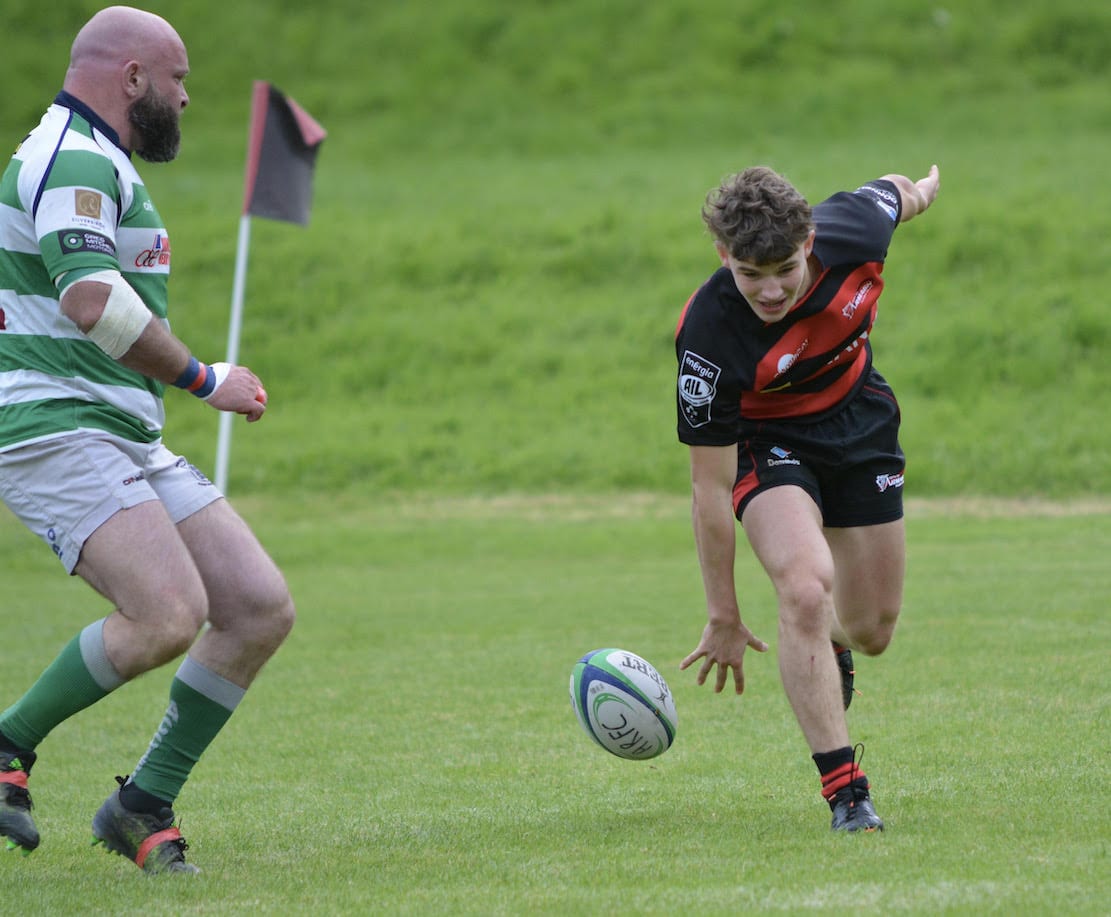 The successful conversion brought the scoreline to 20-7. Armagh then edged ahead 23-7 on 46 minutes with 3 points from the boot of O’Brien.

The young centre then sliced through the Omagh defence two minutes later and good interplay saw Tim McNeice stopped short of the line.

Philip Fletcher had a charge before scrum half Trevor Girvan dotted down for Armagh’s bonus point try. The conversion from O’Brien made it 30-7 and many thought a big score was on the cards for the home side.

When O’Brien cut through for a fine individual try on 53 minutes, the scoreboard reflected a handsome 35-7 lead for the home side. Another first xv debut was given to scum half Alex Johnston as the Armagh bench took to the field. 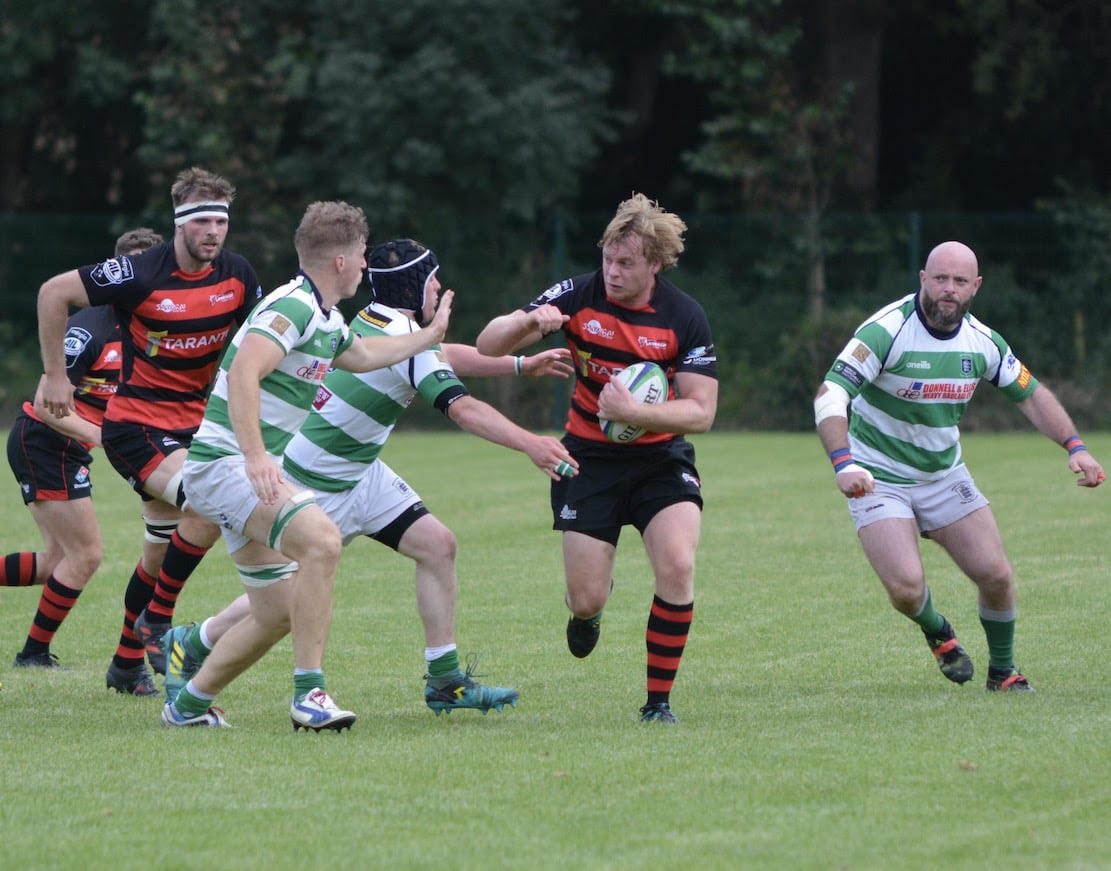 Ross Morris put in a promising debut performance for Armagh

The final 20 minutes remarkably saw the script being torn and Omagh scored four tries as the home side switched off defensively.

The first error was a kicked charged down in the Armagh 22 and Omagh accepted the gift of 5 points. Four minutes later the home side were penalised for a late tackle and Omagh opted for a scrum in the Armagh 22. A simple wrap around move saw the ball dotted down under the posts and the score crept up to 35-19.

On 68 minutes Omagh scored another super try with their left winger able to make the line from 50 metres out. The conversion brought the score to 35-26 with Omagh showing great spirit in their fight back.

Armagh did stem the flow with another try of their own with two minutes remaining when impressive winger Nelson crossed for his brace of tries following good work by Andrew Winder.

Some hard graft was called for on Saturday’s game

Omagh had the last say however, pouncing on yet another Armagh error when they dropped the ball in the centre of the field and Omagh fullback Elliott, sprinted in unopposed for an unconverted try and a bonus point for the visitors.

This brought an end to the high scoring match with a tally of 11 tries with the final score, City of Armagh 40, Omagh Academicals 31.

This Saturday City of Armagh travel to City of Derry in the quarter final of the Bank of Ireland Senior Cup and they will need to erase their defensive frailties if they are to progress beyond this tricky encounter.

City of Armagh Seconds made the trip to Newtownards on Saturday to begin their campaign in the Millar McCall Wylie Junior Cup. The team were looking to erase the memory of their early exit last season and took to the pitch with confidence.

The home side won the toss and chose to play with the strong wind at their backs in the first half. This proved a wise choice with Armagh regularly being forced to turn and have to play out from deep in the opening exchanges.

The opening score of the afternoon came from team captain, John Faloon, following a flowing move up the pitch that saw notable carries from Jack Treanor and John Clarke, before the ball was transferred across the backline for Faloon to dive over in the corner. Cormac Fox was just off target with the difficult conversion.

Ards responded to this early set back but the Armagh defence was well organised and from a forced turnover, the visitors broke from deep.  JJ Scheepers made a break on half way and after some slick hands from Gerard Treanor, Gareth McNiece and Ryan Morton it was Jonny Agnew on hand to dive over in the left hand corner with Fox adding the extras. The next ten minutes saw the visitors struggle to get their hands on the ball as Ards retained possession and took the ball through many phases and forced their way over the line, 12-5.

Fox then began to control the game for Armagh and his well-judged crossfield kick saw David Agnew collect and beat a defender to go in under the posts and leave the score at half time, 19-5 to the visitors.

Armagh started the second half by using the wind to find field position and following a period of pressure in the Ards 22 the ball was moved wide for David Spratt to score in the corner. Spratt grabbed his second of the afternoon when a clever kick by Fox sat up for the on-rushing winger.

Fox then got a try with a well-judged interception before a break from deep saw fullback Kyle Faloon get a try under the posts. The final score of the afternoon came from the industrious Ryan Morton, who got on the end of a break by David Agnew to grab a well deserved try.

Armagh had to defend for the final ten minutes as Ards continued to throw everything at the visitors but the defensive line held firm. The whistle blew for full time and the final scoreline was 52-5 to the visitors with City of Armagh progressing to the second round of the cup.