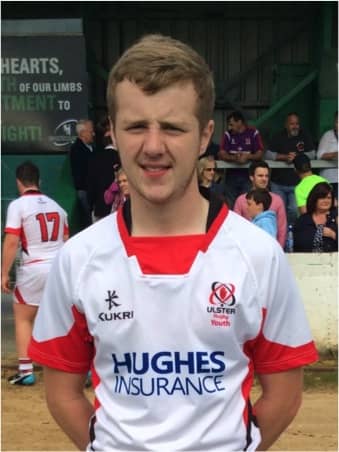 What was remarkable about this was the fact that Cormac only turned 16 in August and will therefore be still able to play for Ulster for another 2 years.

Cormac started in all three games scoring Ulster’s only points in their 60-3 loss against Leinster again kicking 2 penalties against Munster in their 36-6 defeat and then scoring a penalty and conversion in their 18-10 defeat to Connaught. Cormac has been playing rugby since mini level and followed his older brother Aaron who himself was a very useful scrum half. His younger brother Dillon has recently joined the under 14s and he too shows great potential.

Cormac is an integral part of the double winning under 15 team in Armagh a team which only lost one match all last year. This year they have moved up an age group but they still remain undefeated this season. Regularly 28 boys turn up for training each Wednesday night and they are well drilled by coaches Anton Finn and Harry Doyle.

They are embarking on a short tour to Cork next February.

Cormac’s success is not the only one as Shea O ‘Brien , Shane McKeever, Barry Finn , Aaron Kennedy and Tiernan O’Neil are all in the Ulster squad as is Paul Mullan. Paul unfortunately had a major injury playing in the squad and will be out until next February.

Mention should also be made of Jordan Falloon another Armagh star in the making who is in the under 18 squad.

Things are going well in the youth section with hundreds of kids turning out each Saturday.

To make this happen this needs dedication from coaches and Armagh are lucky in this aspect as numerous people gave up their time to support these budding stars.

Credit should also be given to the many parents who support their children across the length and breadth of Ulster.