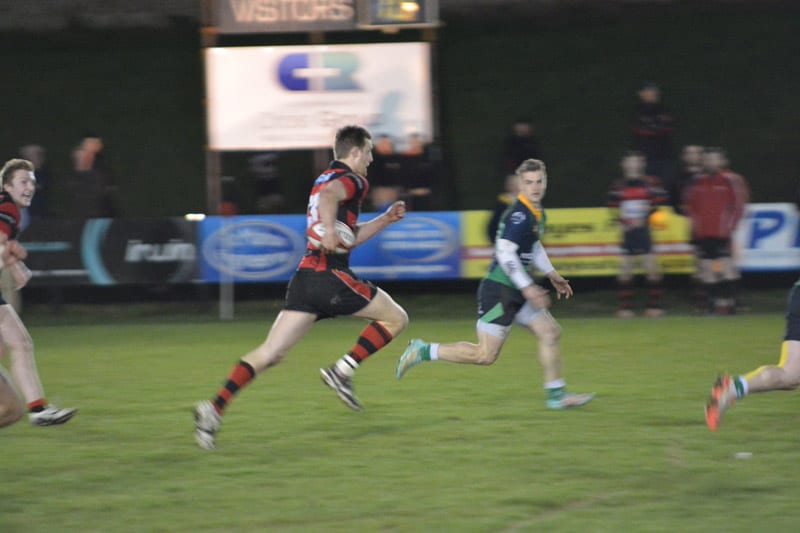 This is a first ever for the club, but with a match in hand Ballynahinch could well re-secure the league win when they meet City of Derry next week.

The match winning momentum shown by the Armagh team when they trounced Tullamore last Saturday was carried over and was evident again on Thursday evening. The evening fixture attracted a large crowd of Ballynahinch support and as it was the last chance to witness Andy Hughe’s coaching prowess the local support showed up in force also!

The game kicked off in perfect playing conditions and Richard Reaney’s penalty put the visitors into an early 0-3 lead.

Armagh responded with a fine break down the left wing by Stuart Lester. He kicked ahead and full-back Matthew Hooks dived in to touch down.

By this time, however, Armagh began to ‘get into gear’ and stepped up the pace of the game. This was more than Ballynahinch could cope with and John Faloons try showed the visitors that they were not up to the scorching pace of Armagh.

Another conversion from Matthew Steenson edged Armagh into a slender 14-10 lead. The icing on the cake came from another scorching run from Stuart Lester who touched down in the left corner to close the game off at 19-10.

Granted, Armagh’s league topping stint may only be short-lived as Ballynahinch would be the fancied side when they play City of Derry next week.

It is changed times, however, from the days when Armagh were seen to flounder in Qualifying two League not that long ago. Some of the credit for this improved form simply must go down to sound coaching from Andrew Hughes! Andrew Nesbitt, Raymond Donnelly and Noel Conn say thank you to Armagh coach Andrew Hughes after the match against Ballynahinch.