City of Armagh made the journey to Templeville Road in Dublin on Saturday to face St Mary’s College in Round 2 of the Energia All Ireland League.

In contrast to the previous week, the sun was out and it was a perfect day for playing rugby.

Armagh had the breeze at their backs in the first period and their half backs, Fox and Treanor used this to their advantage in the first ten minutes, as they forced the dangerous Marys side to play from deep.

The game was being played at a frantic pace and after a number of phases around the Mary’s 22 the home side managed to win a penalty and clear their lines.

Fifteen minutes in, City of Armagh took the lead when Cormac Fox converted a routine penalty after
St Marys had infringed in their 22.

The hosts then began to gain a foothold in the game and enjoyed more possession and territory, stretching the Armagh defence.

The home side then made the break-through on 28 minutes when after a sustained period of pressure in the Armagh 22, they were awarded a penalty try and Armagh’s fullback Tim McNiece was sent to the sin bin.

St Marys upped the tempo and only for an excellent piece of defending from Shea O’Brien and Andy Willis, they would have extended their lead.

Armagh’s Shea O’Brien looks for a gap in the St. Mary’s defence

The home side made the extra man count however in the 36th minute as Myles Carey made a break down the right wing and found Conway in space to run in for a try. Shields converted to push St Marys into a 14-3 lead.

The scoring however wasn’t finished for the half and on the stroke of half time, a break by Chris Colvin saw him put Andy Willis into space and the experienced winger rounded behind the posts for a deserved score after an industrious first half from the visitors. Fox made no mistake with the extras but Armagh trailed at the break 14-10, knowing they would be playing up the hill and into the wind in the second period.

It was City of Armagh who made the perfect start to the second half, as Marys exited with a box kick that was fielded by McNiece. Fresh from his ten minute break, he claimed the ball and set off on a run that saw him find Rob Whitten in support and he was able to send back row colleague, Neil Faloon running in for Armagh’s second score in the left hand corner. Fox knocked over an excellent conversion from out wide and Armagh moved had moved into a 14-17 lead. 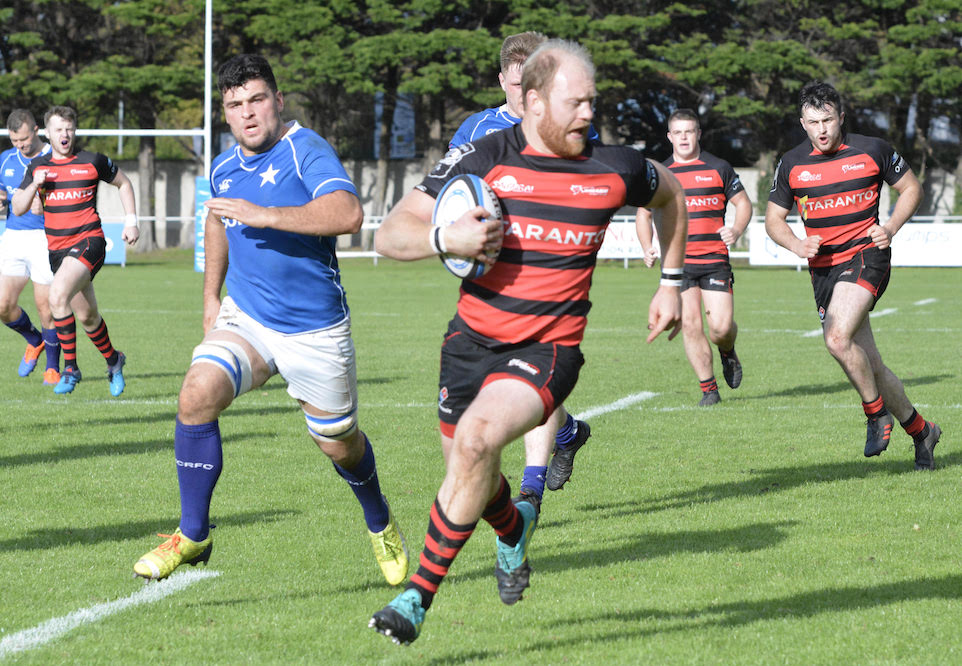 St Marys used the wind and hill to their advantage and on a number of occasions spent periods of time in the visitor’s 22, but stubborn defence saw the physical attack kept at bay and Armagh cleared their lines. Midway through the second period, Armagh had a penalty on the Mary’s 10m line.

Fox opted for the posts and despite kicking into a strong wind, he bisected the uprights to push Armagh six ahead, 14-20.

The remainder of the game was played in the Armagh half with St Marys throwing everything at the visitors, but again their well-organised defence held firm with the final whistle signalling a valuable away win for City of Armagh with the final scoreline, 14-20.

This match was a fantastic advert for Energia AIL rugby. Both sides tried to play the game in the right manner and although tense for players, coaches and supporters, it was great viewing for the neutral supporter. It took the Armagh bench to get them over the line with all twenty players playing a pivotal role in the victory.

City of Armagh now look forward to welcoming league leaders, Old Belvedere, to the Palace Grounds this Saturday, in Round 3 of the All Ireland League before the players get a deserved week off.
Kick off time still to be confirmed because of the World Cup Quarter Final match.