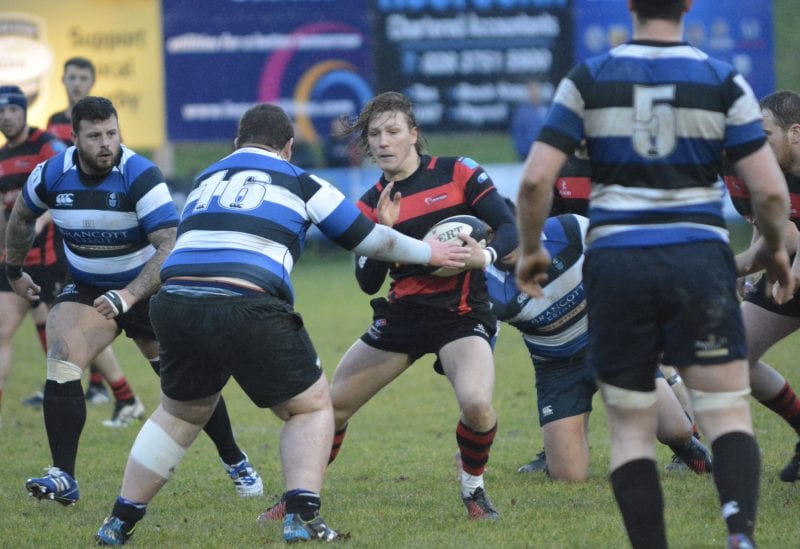 City of Armagh completed their first half of fixtures in the Ulster Bank All Ireland league on Saturday and maintained their 100% win record with a convincing 39-11 victory over third placed Wanderers RFC.

The Dublin team had travelled to Armagh in confident mood following recent results and as the game kicked off in damp conditions, the visitors started well and took the game to the home team. The first quarter was evenly balanced with neither side able to breach two well-organized defences. The deadlock was broken on fifteen minutes when Armagh outhalf, Cormac Fox kicked a penalty for a 3-0 lead. Almost immediately, the home team were penalised and Wanderer’s winger, Eoin O’Shaughnessy levelled the match at 3-3.

Armagh were starting to dominate territory and possession and concerted pressure resulted in the first try of the match on 25 minutes when winger Andrew Willis finished off a fine backline move with an unconverted score in the corner. The home side now led 8-3 but Wanderers were proving tough opponents with a strong defence and Armagh’s only points in the remainder of the first half came from the boot of Fox with penalty kick to give Armagh a narrow 11-3 lead at the break.

The second half commenced and Armagh looked to raise their game and a further penalty from Fox on 45 minutes stretched their lead to 14-3. Wanderers, however were still very much in the game and the visitors scored an unconverted try on 50 minutes when centre Robert Clune broke through from open play to bring them within six points at 14-8.

The Armagh forwards responded by taking play up to the Wanderers 22 where the visitors were penalised again for offside and Fox added 3 points. With the score at 17-8, Armagh looked to stretch their lead further and the breakthrough came with a second try, scored by James Morton. The experienced flanker was up in support to take a scoring pass from Andrew Willis to run in from the 22 and touch down near the posts. Fox’s conversion gave the home team a 24-8 lead but O’Shaughnessy kicked a penalty for Wanderers to reduce the gap to 24-11.

Fox kept the scoreboard ticking over with his sixth successful penalty on 65 minutes and Armagh’s fitness came through when they dominated the final ten minutes to score two further tries. On 71 minutes the outhalf kicked crossfield where two Armagh players were unmarked and centre John Faloon caught the ball and touched down.

With two minutes remaining, substitute scrum-half TC Campbell half cleverly chipped the ball into the Wanderers 22 and quick thinking by Ryan Purvis secured the ball for Armagh a yard from the line. Number 8 Neil Faloon then powered over for the bonus point try and the referee brought the match to a close with Armagh victorious 39-11.

The coaching staff were delighted at the final whistle with the strong second half team performance. The fourth try was certainly a bonus against a strong Wanderers team and with Greystones collecting a bonus point win at Thomond, Armagh have maintained their 9 point advantage at the top of Division 2B.

The league now takes its ‘winter’ break and the next AIL fixture will be away to Wanderers on January 21. This Saturday, the focus at the Palace Grounds will be on the Seconds who have a tough fixture at home to CIYMS, while the Thirds travel to play Carrickfergus.

Picture: Harvey Young returned to the Armagh side following injury.