City of Armagh lose out at home to Sundays Well 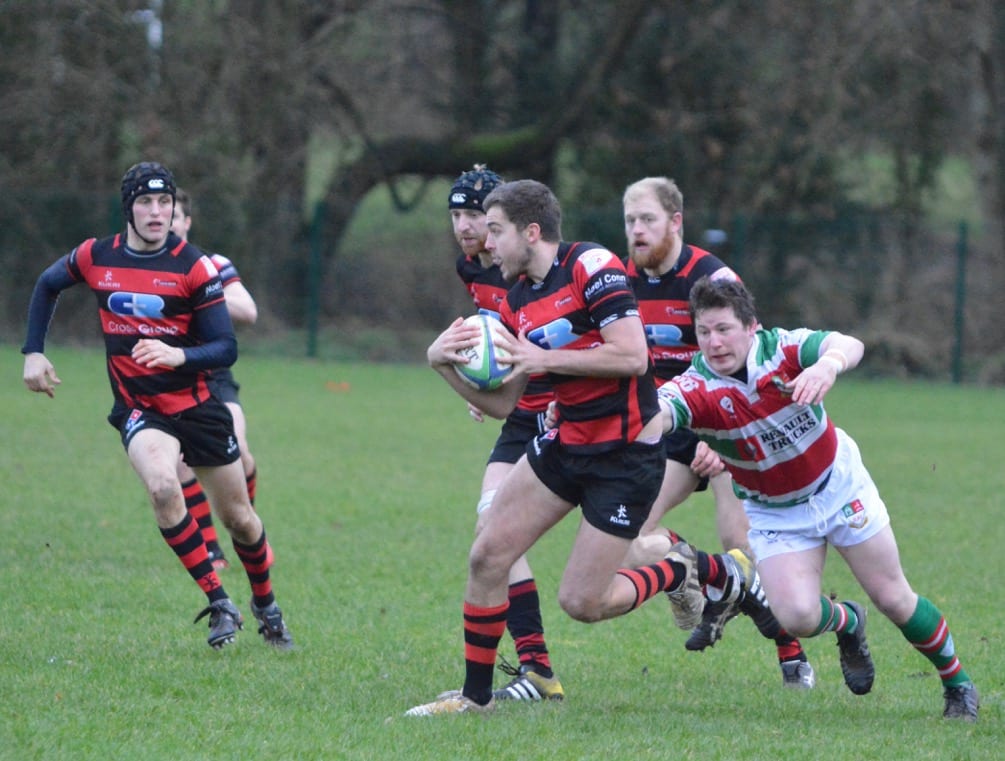 Despite heavy rainfall on Saturday morning, the well–drained pitch at the Palace Grounds was in near perfect condition for Armagh’s Ulster Bank

All-Ireland League fixture against Cork side, Sundays Well. A tight game was expected from both teams currently pushing for a top four finish in the league.

With a four week gap since their previous match, the Armagh side were keen to play some competitive rugby and the first set scrum of the game showed their intent when a penalty was awarded to the home team.

This dominance was to be seen throughout the first quarter of the game, forcing Sundays Well to dig deep into defensive mode. Ten minutes into the game, Armagh engaged a rolling maul which rumbled at twenty metres towards the Sunday’s Well line and the pressure resulted in a visiting forward being penalised for failing to roll away following a tackle in front of his posts. Out-half, Johnny Pollock’s, kick opened the day’s scoring at 3-0.

Armagh continued to attack with the pack winning plenty of possession but Sundays Well were well organized in defence. Armagh centre, Stuart Lester came closest to a try when he was tackled a matter of inches short of the try line. The Armagh back row were outstanding in their ability to continually rob loose ball in rucks. The home side were then penalised for failing to release a player in a tackle on one of the few occasions that Sundays Well were able to venture into the Armagh 22 in the first half. Out-half, Shane O’Riordan was able to level the score at 3-3. Further penalties were exchanged to make the score 6-6 before an injury to a linesman led to a lengthy delay as he received treatment. As the first half drew to a close, Pollock converted his third penalty to edge Armagh 9-6 ahead at the break in a very tense encounter.

Stephen Morton on a charge

Stuart Lester on a charge

The second half commenced with Sundays Well looking much more threatening and they began to gain territory when Armagh missed several tackles. The visiting fullback made a 60 meter break causing panic in the Armagh defence. Armagh’s prop forward Simon Carlile was ‘sin-binned’ for failing to roll away after a tackle. This transgression led to O’Riordan levelling the score at 9-9. Further yellow cards were issued to Josh Morton for a deliberate knock on and later in the game to captain Neil Faloon as Sundays Well dominated and continued to pressurise the home team. Eventually substitute prop forward, Evan O’Connell, scored a try for the visitors in the left corner. Outhalf O’Riordan was accurate with the conversion to put the visitors ahead 9-16.

With time running out Armagh responded well and were seen to force their way deep into Sundays Well territory only to loose possesion due to unforced handling errors.

The Armagh pressure eventually paid off when fullback Hooks forced his way over for a try in the corner in injury time. A conversion would tie the match and the tension around the ground was immense. Unfortunately the kick from Matthew Steenson sailed wide and the final whistle blew with Armagh defeated, 14-16.

On a positive note, Armagh gained a losing bonus point and their league position was helped with Greystones losing to Barnhall. Overall the coaching team were pleased with the team response when going behind in the match but more points should really have been put on the scoreboard in the first half when Armagh were the more dominant team.

Next week sees Armagh back on the road again when they travel south to Dublin to play Bective Rangers.