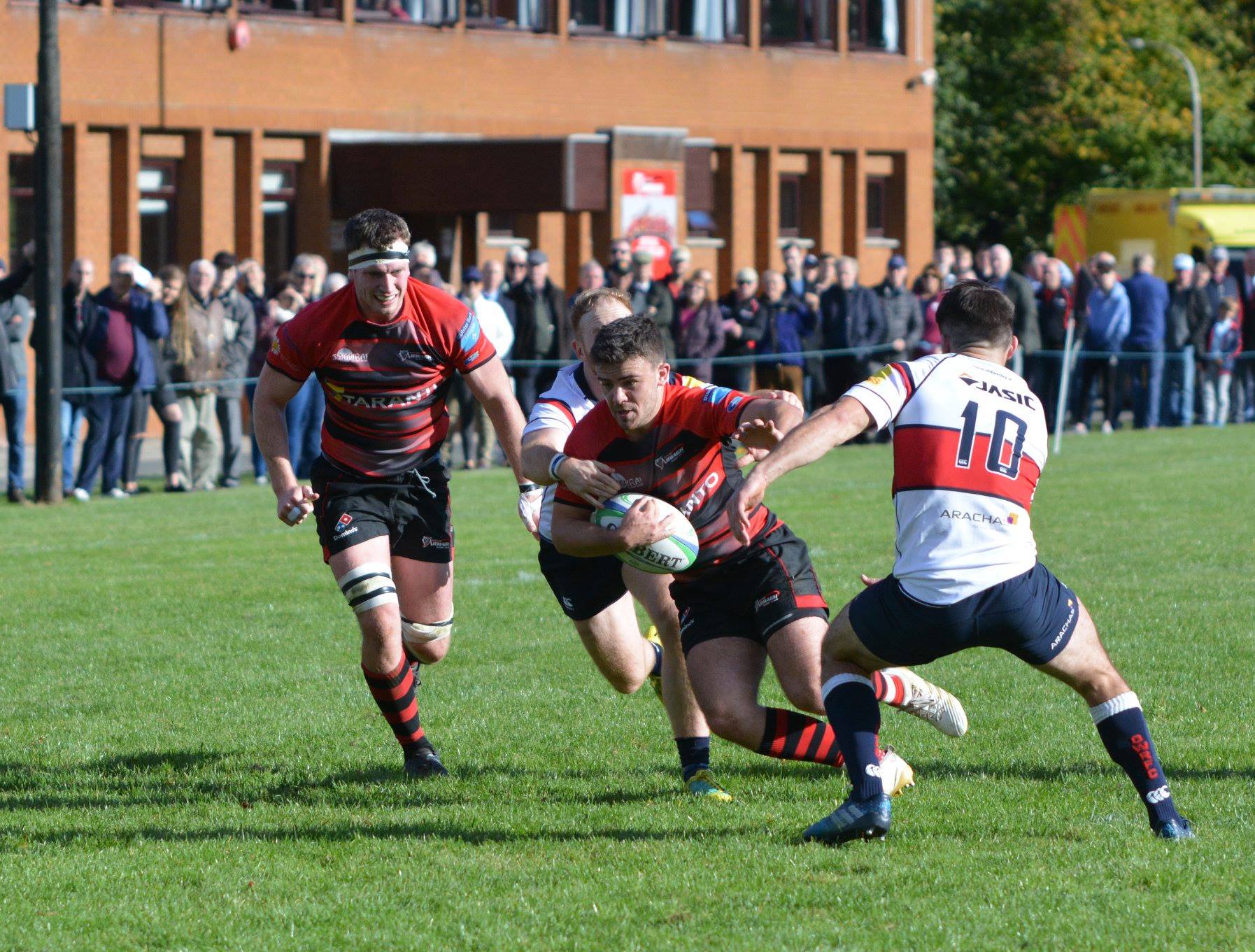 City of Armagh made their debut in Division 1B of the All Ireland League on Saturday when Dublin side Old Wesley, travelled to the Palace Grounds.

Armagh lost number 8 Neil Faloon to sickness just before the match and James Hanna was drafted into the back row.

In perfect sunny conditions, the home side kicked off and looked to have scored a stunning try after 60 seconds.

Outhalf Cormac Fox chipped to the right wing where Andrew Willis kicked and chased, winning the race to touch down in the corner. The referee however signalled a 22 drop out after consulting with his touch judge.

The early pressure continued from the home side but a dangerous interception by Old Wesley in their 22 brought play to the half way line.

Armagh scrum-half Gerard Treanor made a clever break down the blindside in the 12th minute and kicked ahead but another 22 dropout resulted. With the Old Wesley defence holding firm, Armagh had another chance to open the scoring on 15 minutes.

Flanker Nigel Simpson made a line break and charged into the Wesley half but his long pass out to the wing went forward and the opportunity was lost.

A missed tackle then saw a clean break by Wesley outhalf Tom Kiersey and winger Ryan Purvis made a try saving tackle to keep the sides level.

Both sides were guilty of handling errors, gifting possession to the opposition and the first 30 minutes ended all square.

Old Wesley then had a concerted attack from a lineout in the Armagh 22 and a couple of phases later, winger Paul Harte found space to cross for the opening try which went unconverted.

From the restart, Armagh shot themselves in the foot with a missed tackle on halfway and Wesley captain Harte scored his second try under the posts for the visitors to lead 0-12.

Old Wesley were now playing with confidence, helped by uncharacteristic errors from the Armagh side.

The halftime whistle went with the home side disappointed not to have got on the scoreboard in the first period.

Armagh needed a response and 10 minutes into the second period they got their reward after kicking two penalties deep into Old Wesley territory.

Full back Chris Cousins went close but was just short of the line. Possession from a line out was secured and the pack drove over for the try with hooker Andrew Smyth touching down. The conversion was unsuccessful and Armagh were off the mark at 5-12.

On 58 minutes, Old Wesley full back, Rory Stynes converted a penalty to stretch the visitor’s lead to 5-15.

Two minutes later it was Armagh who responded with an attacking lineout creating the opportunity for winger Purvis to score out wide. The scoreline of 10-15 meant an exciting final 20 was on the cards.

On 72 minutes the visitors seized the initiative when Harte ran through a static Armagh defence and outhalf Kiersey finished off a sweeping move with a try in the corner.

Stynes converted superbly from the touchline to give Wesley a flattering 10-22 lead.

Armagh attacked for the remainder of the match and with two minutes on the clock, a driving maul went over the line for Treanor to touch down and Fox to convert. The final whistle went with the final score 17-22 and Armagh had rescued a losing bonus point.

Many however believed they had the ability to have won the match and were disappointed a debut victory had not materialised.

The Armagh coaching team were frustrated overall but took some positives from the game. Chris Parker commented: “This was a huge challenge for the boys today and while we are disappointed not to secure a win, we will learn from this fixture. Old Wesley were much more clinical today in taking their opportunities and we need to step up at this level and convert pressure into points”.

City of Armagh now face a huge challenge away to Ballynahinch this Saturday in their second All-Ireland fixture.

The seconds travelled to play Cooke at Shaws Bridge in the conference league on Saturday off the back of a good win against Dromore in their previous game.

With several changes to the side, Armagh comfortably defeated Cooke 42-24 in an entertaining game which ebbed and flowed throughout.

Armagh spent the first 10 minutes in defence around their 22 area as Cooke came out of the blocks quickly however good defence kept the line intact. Turnover ball in midfield on 14 minutes by John Faloon led to a charge up field and with Kyle Faloon and Luke Crozier moving the ball right, Ryan O’Neil was able to beat his marker to touch down at the posts. Kyle added the conversion for a 7-0 lead.

Cooke were playing with high tempo themselves and after more attacking play they levelled the game with a converted try.

On 32 minutes excellent handling by the Armagh backline with Shane McKeever, Shay O’Brien and Michael Ross prominent led to John Clarke forcing his way over the try line close to the posts, 14-7 to Armagh.

Just before half time Cooke scored another converted try at the posts to tie the game at 14-14. With the breeze and slope in their favour Armagh kicked off and after stealing a Cooke lineout through Steven Morton, Clarke and Ollie Millar made the hard yards before Kyle Faloon moved quick ball left with Cooke earning
a lineout 10 metres from their line.

With Josh Kennedy in imperious line out form throughout, the ball was turned over for John Faloon to twist
and turn his way over midway out.

With kyle in good kicking form, the conversion was added to bring the score to 21-14. Jack Treanor entered
the fray to make his seconds debut for Michael Hoey and Ryan Morton replaced Steven Morton. On 56 minutes Cooke took play into Armagh territory however Millar turned over the ball taking off downfield and
offloading to Kyle Faloon.

He found himself in open space midfield and scorched off to touch down at the posts for another converted try, 28-14.

Cooke were still competing all over the park determined to add to their tally and after O’Brien had tracked back to make a try saving tackle in Armagh’s 22, Cooke were unfortunate to gift Crozier an intercept try for
another converted try at the posts.

Cooke did add an unconverted try shortly after on 73 minutes. Armagh retaliated when Ryan Morton made a big tackle centre field with the ball knocked loose for Ryan O’Neil to snap up and show a clean pair of heels to touch down at the posts for his second try of the day.

Cooke had the last say on the blow with an unconverted try of their own to bring the final score to Armagh 42, Cooke 24.