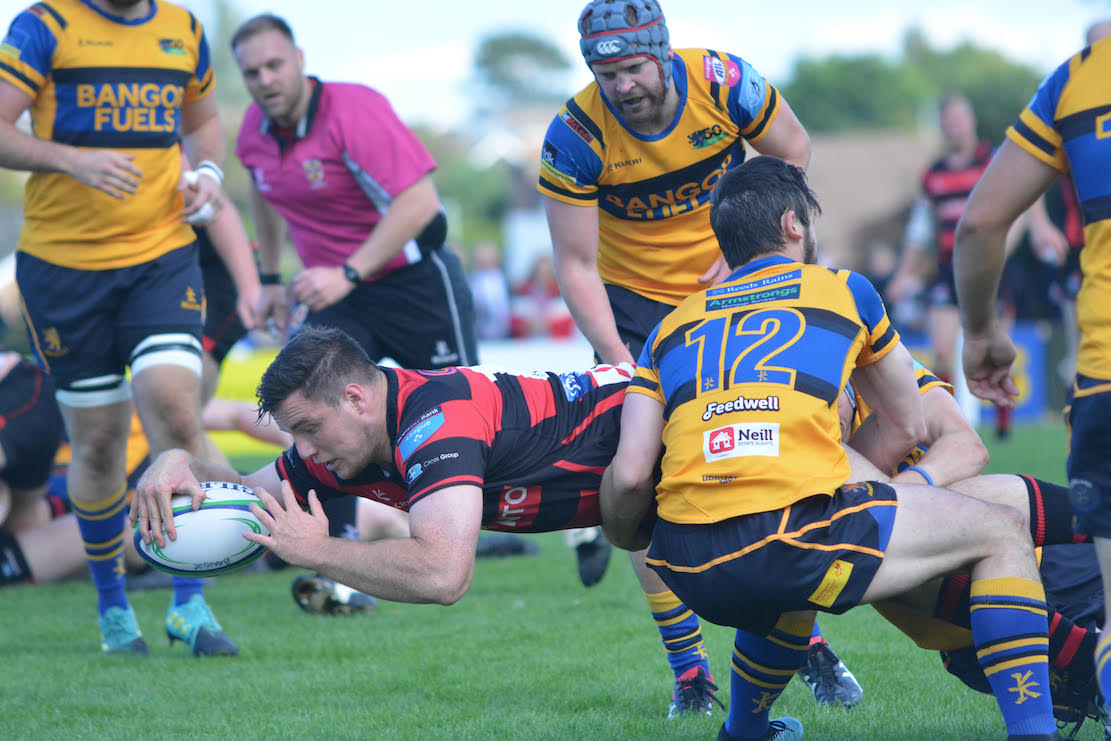 City Armagh RFC made it three bonus point wins out of three in Section 2 of the SONI Premiership, with a comprehensive win over a gallant Bangor side by 50 points to 7.

The game kicked off in bright sunshine on an excellent pitch at Upritchard Park. Playing some very attractive rugby, a much changed Armagh side, got on to the scoreboard early when prop John Clarke ran an excellent line to barge over for a try, converted by Cormac Fox.

After 13 minutes, Armagh doubled their tally through hooker Jack Treanor, who crossed close to the posts. Fox converted for a 0-14 scoreline.

Armagh’s momentum was thwarted with their forwards being penalised particularly at the breakdown and the side conceded 9 penalties in the first half alone.

Bangor put up some spirited defence but were caught narrow at times, expecting drives from the forwards and this left space out wide. Outhalf Fox delivered a perfect cross kick on 27 minutes allowing Andrew Willis to collect the ball and dive in for a well-executed try. 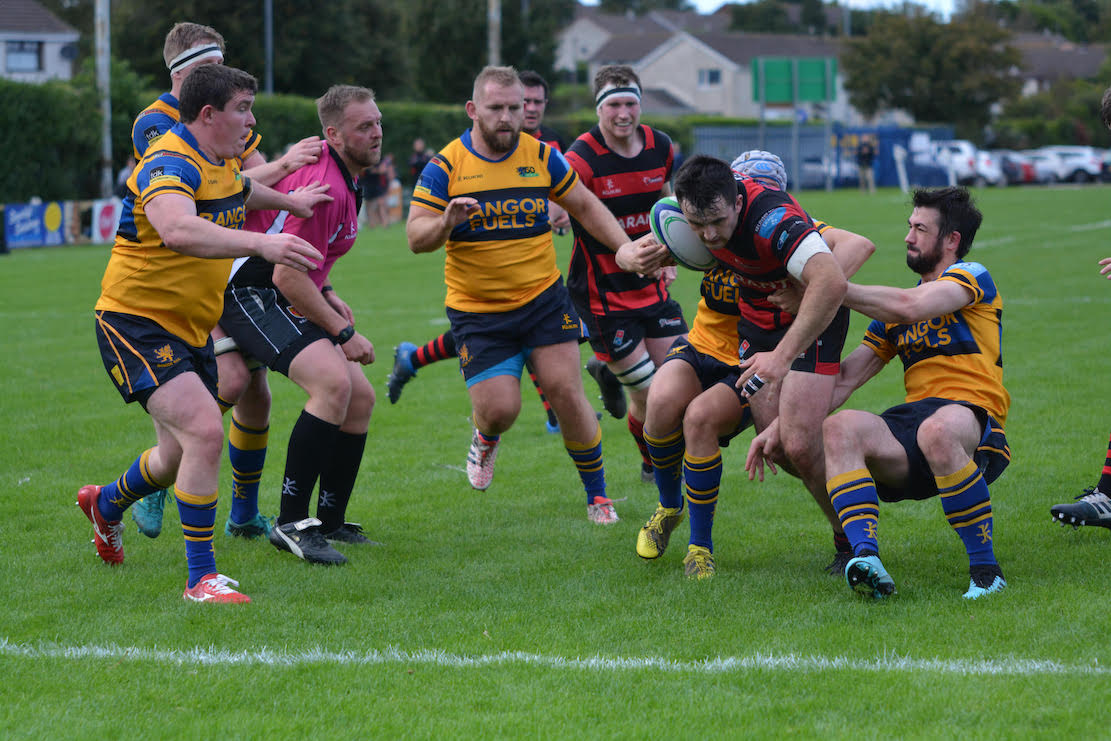 Approaching halftime, John Clarke got a knock and the referee insisted that he be replaced. Peter Lamb came on at loose head prop allowing Paul Mullen to shift to tighthead. It wasn’t long until the bonus point try was scored, with fullback Shea O’Brien cutting through the defence to put Armagh further ahead.

The whistle went for halftime and City of Armagh were ahead comfortably at 0-24.

The visitors made made a number of changes at the break, allowing Chris Colvin and his ex-Queen’s clubmate, Nigel Simpson a precautionary rest. Jonny Morton came into the back row with David Agnew going on to the wing and Josh Morton switched to full back.

The second half started off with Armagh dominating but Bangor defended well. The Armagh pack struggled slightly in the scrum but were dominating the lineouts. 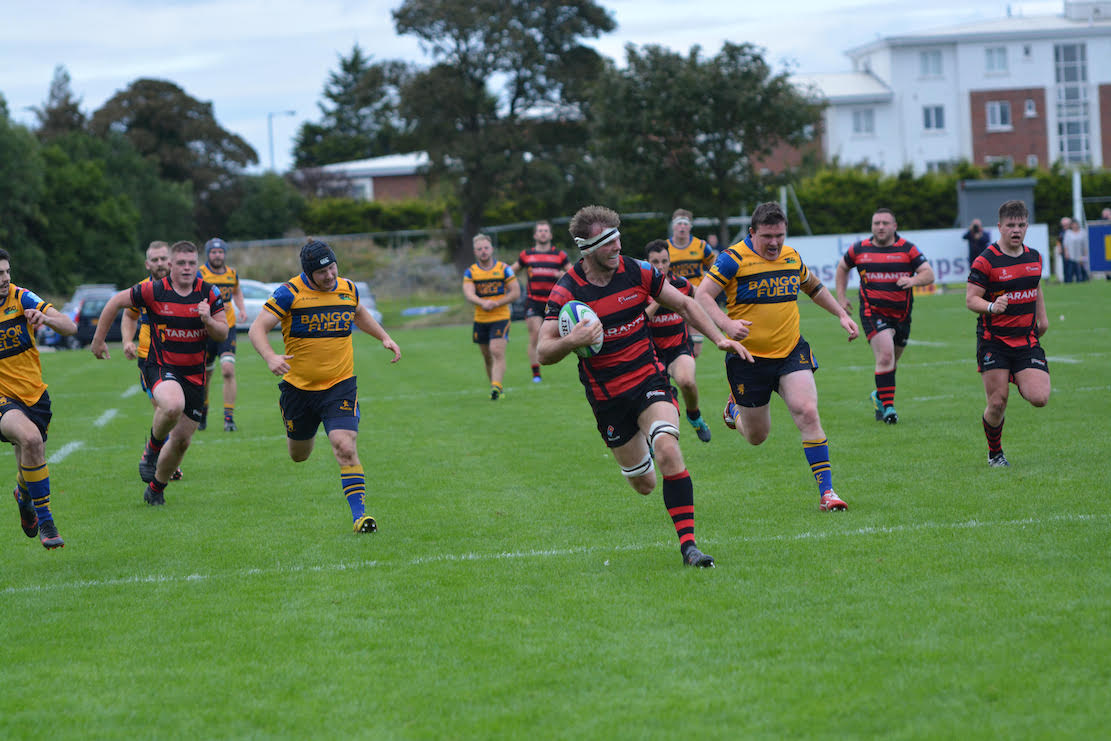 With 50 minutes on the clock, a line out steal by Ollie Miller allowed the ball to be moved through several pairs of hands for Barry Finn to burst through some weak tackling to score close to the posts. for Fox to convert. Armagh’s still struggled with their discipline, a worry for coach Willie Faloon and referee, Dan Carson after losing patience, yellow-carded James Hanna. James had only just taken to the field to replace David Agnew who had suffered a shoulder injury.

At this stage Bangor scored an excellent converted try following a good attacking spell, much to the delight of the home crowd.

Their respite however didn’t last for long and Armagh upped the tempo again with a second O’Brien try. Further misery was heaped on Bangor when straight from the restart, Neil Faloon made an initial break and Ollie Millar raced in from 50 metres.

Fox converted from out wide. Jack Treanor, not wanting to be overshadowed by Shea O’Brien then scored a second try of his own after some determined running for the final score of the match. 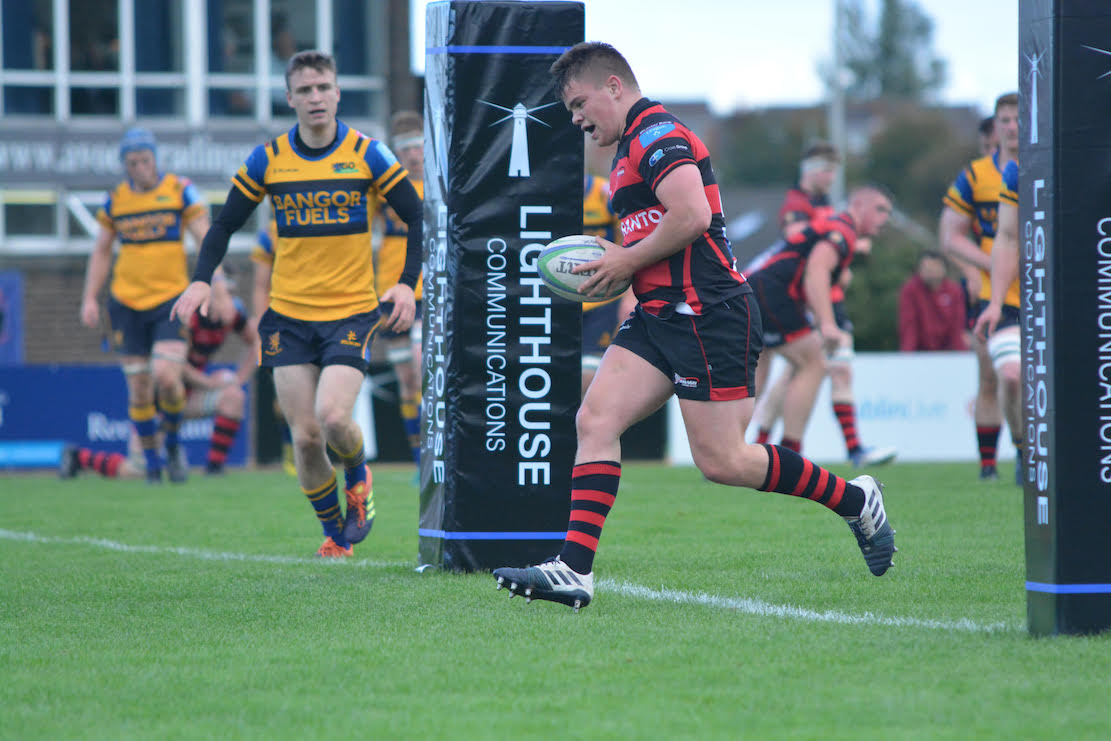 The final score was 7-50 to City of Armagh and coaches, Faloon and Parker were reasonably satisfied with the performance with the younger players showing up well.

They emphasised however, that tougher matches lie ahead with the start of the All Ireland League, with a lot of work to be done at training this week to prepare for the first game this Saturday against Naas at the Palace Grounds.