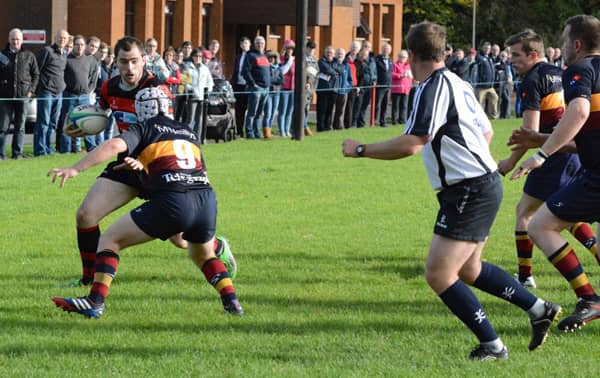 Armagh entertained Banbridge on Saturday afternoon in their second fixture in the Ulster Senior League and came away with a convincing 40-0 victory.

Having beaten City of Derry away in the previous fixture in this league and also having won their first three All-Ireland League games the home side were showing some confidence.

However, Banbridge always proved to offer stiff resistance in past fixtures this game had to be treated with the respect it deserved. The playing conditions were perfect for open Rugby with the temperature holding at 19 Degrees and a stiffish breeze blowing from the Palace end.

Armagh played the first half with this wind at their backs and began to exert pressure on the visitors directly from the kick-off. After 21 minutes they had scored two Morton tries & two Matthew Steenson conversions to notch up 14 points. Before the break two more tries from Andrew Willis were converted again by Steenson to bring the score up to a bonus point tally of 28-0.

The second half started off with Matthew Steenson scoring an opportune try but failing to convert his own effort! Robbie Faloon completed the try list with young Lorcan McGillan converting.

Apart from a brief couple of minutes when Banbridge mustered pressure to pin Armagh in their 22 the home team dominated all aspects of this game.

The Armagh coach, Andrew Hughes, commented that as far as he was concerned, the most important statistic of the afternoon was the zero points against Armagh. Man of the match, Manihera Eden, managed to control the game most effectively from the back of the pack. His kicking from hand and his on the spot decisions assisting the pack to control the game.

It must be said, however, that while this result favoured Armagh Banbridge did not perform well on the day. No doubt, they will regroup and provide Armagh with a more than formidable opposition when they next meet!

This result puts Armagh into fifth position in the Ulster Senior League having won two games from two games. It should also be noted that the three wins from three games sees them sharing top spot in their All-Ireland League.

Note that two of these wins were away in Munster where league points are only at a premium! The team’s results, no doubt, reflect the serious attitude the team have adopted this season. Hopefully they can continue to reward the supporters with wins come the games to be played in the cold, wet afternoons later in the season.

The team’s next fixture is set for them to play Ballynahinch at home in The Ulster senior League. The time & date is yet to be confirmed but club supporters will be informed by text later in the week.