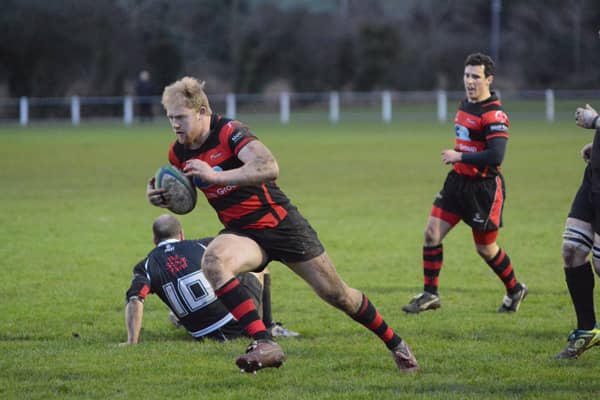 For their final Ulster Bank All-Ireland League fixture of 2014 Armagh travelled away to Ards.

Armagh were revelling in renewed confidence after they had performed well against Ballymena last time out.

The recent defeats by Highfield and Wanders had dropped them from a joint league leading position down to seventh slot.

Determined to re-establish their match winning form club coach, Andrew Hughes, was heard to be fairly vocal in his pre-match pep talk prior to the game!

Ards, on the other hand, have had what could be only described as torrid recent seasons. They have managed to escape relegation by the slimmest margins and had yet to win a game this season. Armagh’s centre, John Faloon, just failed to score in the first half.

They had scored a solitary losing bonus point and with 313 points against & only 71 points for the future looked bleak with them anchored firmly to the bottom of the League!

Ards kicked of in near perfect conditions with a slight breeze on their backs. The referee penalised Armagh for an early push in the first scrum of the game. The resultant successful kick saw the home side 3-0 up with only five minutes on the clock.

Despite the sheer size of the home pack Armagh began to dominate both scrums and line-outs and their determination in open play began to reap results. This resulted in Armagh’s forwards breaking the Ards line repeatedly.

Andrew Smyth & Mark Riddell’s breaks made great ground to see Armagh take up position in the right corner on several occasions. From this field position Armagh had two tries disallowed.

Only when Armagh were penalised for diving into a ruck was the pressure relieved. Further repeated handling errors illustrated that patience was required of the visitors.

The frustration being experience by the home pack resulted in the Ards blind side flanker receiving a yellow card for throwing a punch in a ruck. Matthew Steenson’s kick put the score to 3-3.

As the game progressed into the second quarter it looked as if Armagh would inevitably get their noses ahead. Armagh’s efforts were rewarded with a text book try from Robbie Faloon in the left corner. Matthew Steenson’s conversion fell short to put the score to 3-8. Ards problems were added to when Armagh’s number 8, Neill Faloon, scored a try following an advancing scrum.

To put the score out to 3-13. This made the home side appear to be in real trouble.

Against the run of play, however, Ards eventually reacted to the endless vocal encouragement from their captain, Scott Young, and they were awarded a penalty and went on to score a try in the right wing which narrowed the score to 11-13.

This lifeline endured to the half-time break and for a few minutes questions were being asked. Could Armagh be seen to capitulate just like they did on their last trip to Ards?

The home side’s ‘honeymoon’ was short lived however, as Armagh piled on more and more pressure after the break. This culminated in a display of sheer frustration when Armagh’s out half, Manihera Eden was seen collect a somewhat late challenge from the Ards no.16.

Unfortunately the young Armagh player retaliated which erupted the both sides into a session of ‘handbags.’ This saw both players receiving red cards and the game continued with Fourteen players on each team. The second half saw Armagh tries from Stephen Morton, Stuart Lester and Neill Faloon. The capitulation of the Ards pack also resulted in Armagh being awarded a penalty try.

The final score of 11-40 did give Armagh a winning bonus point and these five league points restored them back to third league position.

Ards, however, were seen if anything to sink lower and appear resigned to be relegated into junior rugby next season.