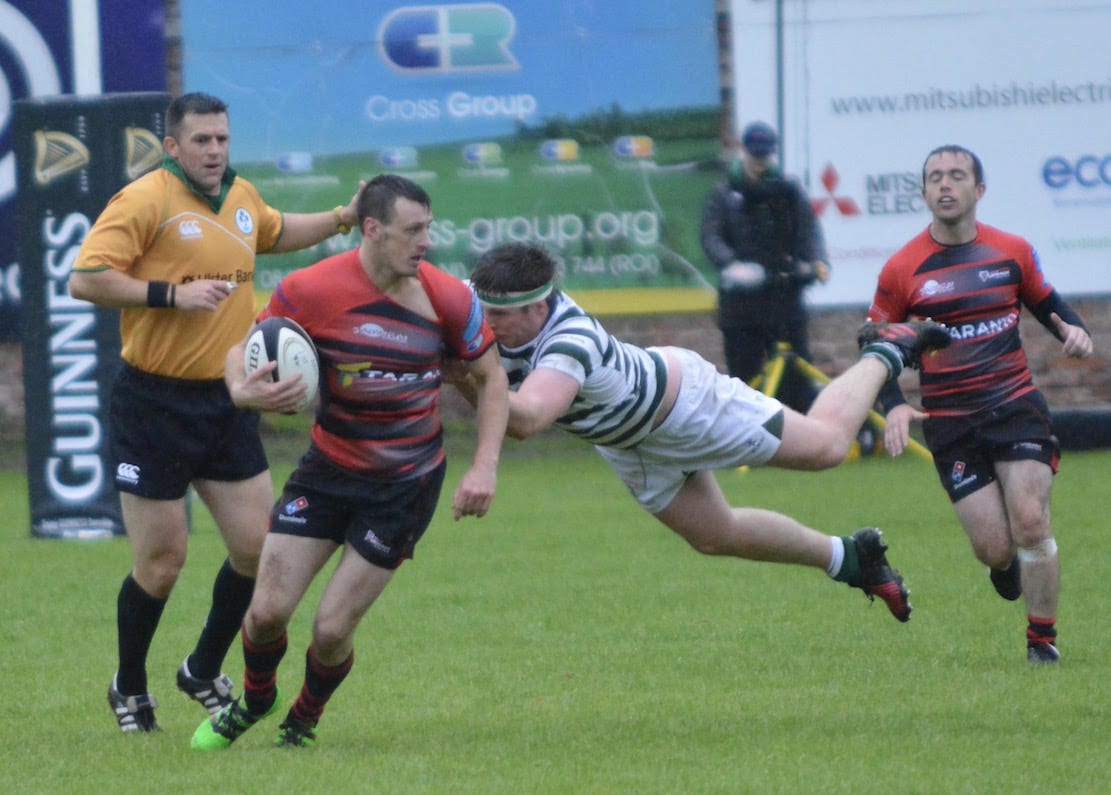 Armagh played their first Ulster Bank All-Ireland League fixture of the new season on Saturday when they entertained Greystones at the Palace Grounds.

Both clubs were great rivals last season, chasing the Division 2B title which the Leinster outfit won by one point, so a competitive match was on the cards when rivalries were renewed.

The game kicked off with steady rainfall which would make handling difficult as it persisted throughout the whole match.

With only a minute on the clock, outhalf Cormac Fox cleverly kicked to the corner and the Greystones winger carried the ball into touch.

From the lineout the Armagh pack drove forward and the ball was recycled to centre John Faloon who scored at the posts for Fox to convert.

Armagh’s dream start continued with a second try on eight minutes when Neil Faloon was up in support to take a try-scoring pass from winger Chris Colvin.

Fox’s conversion put Armagh ahead 14-0. In difficult conditions, Fox kicked a 45 metre penalty to stretch Armagh’s lead to 17-0 before the visitor’s got on the scoreboard with a penalty by Andrew Kealey.

Armagh’s dominance was rewarded with a further penalty from Fox to make the scoreline 20-3.

Ten minutes before the break the dangerous Greystone’s backline made a fine break and winger Jack Keating ran in for a converted try.

A further penalty from Kealey saw Greystones right back in the match at 20-13, as the half time whistle blew.

The second half commenced and it was the visitors who took the initiative, pressing Armagh in their own 22.

A yellow card to second row, Josh McKinley was punished with three points as Greystones narrowed the gap to 23-16.

Further indiscipline by the home team saw centre, Johnny Pollock sinbinned and Armagh were in trouble with 13 players on the pitch.

Greystones stepped up the pressure and following several pick and drives, hooker Ben Tou scored a try which Killian Marmian converted to level the match at 23-23.

The home supporters were downcast when Greystones then took the lead for the first time in the match when Armagh were penalised for failing to release a player following a tackle.

With the score at 23-26 and ten minutes remaining Armagh threw everything into attack and the forwards set up camp in Greystones’ territory.

Greystones defended desperately and a yellow card saw them reduced to 14 men. Armagh were awarded a penalty on front of the Greystones posts and bravely elected for a scrum.

The gamble paid off when after a reset scrum, the referee awarded a penalty try and sin-binned another Greystones prop.

With a narrow 30-26 lead Armagh had three minutes to hold out and Greystones looked to steal the match at the death despite two players in the sinbin, but the final whistle went with City of Armagh securing a vital first home win. Greystones were delighted with their losing bonus point as they knew in the second half they had clear chances to win the match.

The Armagh coaching team were delighted with the early scores but a lot of work will need to be done defensively as the team enters such a competitive league.

This Saturday, Armagh make the first of two trips to Galway this season where they will face Galwegians, who also won their opening match away at Cashel.