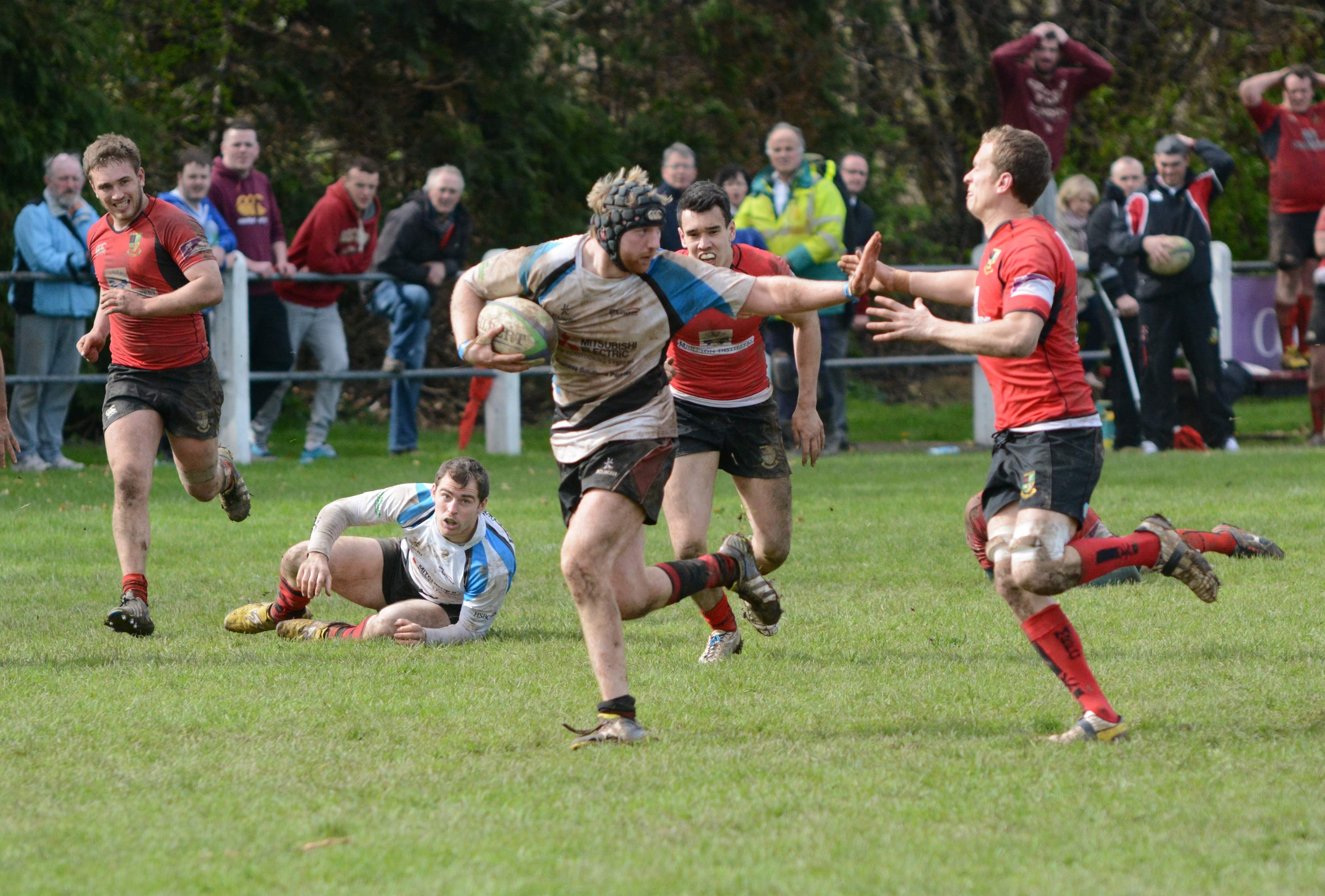 For their last fixture of the 2013-14 season Armagh travelled to Midleton to play a league fixture in the All-Ireland League.

Armagh were seen to field a somewhat depleted side due to a string of recent injuries. Coach, Andrew Hughes , was forced to recruit the services of several young players to fill the gaps created by these injuries. Out-half Magowan gets his pass away

Midleton were hosting a youth tournament with visiting clubs from North London and Wales among the competitors. This added to the sense of occasion as there certainly were lots of players and supporters milling around the club just prior to the senior club game.

The game kicked off in near ideal conditions despite a very heavy squall just prior to the whistle. With a stiff breeze at their backs Midleton took the initiative and scored two tries in the first half.

Armagh, on the other hand, were seen to commit some very naive handling errors and failed to make any real progress in the whole of the first half except for a brilliant try from winger Andrew Willis in the left corner just before the break.

Andrew Hughes must have made a real impression with his half-time team talk as Armagh started the second half with some spirited and constructive moves which enabled them to take up residence in the Midleton 22. In fact seldom did they leave the home team 22 for the whole half!

Play was interrupted, however, for a series of sin-binnings as the Midleton lock-forward was penalised for straying off-side repeatedly and Armagh’s Phill Hill was red carded for a ‘spear tackle. Andrew Willis also had a spell in the sin-bin for questioning the Referee’s decisions.

The final sin binning came in the dying minutes of the game as Armagh began to take control of the scrums and a Midleton prop was judged to be binding incorrectly.

Penalty after penalty resulted in Armagh eventually spinning the ball out across the backs which enabled Richard Reaney to touch down in the left corner.

This evened the score to 10-10 and the pressure certainly was on Reaney as he prepared to take the conversion from the touch-line with the swirling wind at his back! As is now customary, Richard’s kick was right on target and directly in between the posts.

Armagh had a win from what appeared to be a certain defeat at half-time! It certainly was a fitting way for the hard working team to conclude their season with a win which secured sixth spot in the League.

Midleton retained tenth position with 29 points. We look forward to next season with the hope that Armagh can recruit some new faces over the Summer break prior to their tour to France in August.