City of Armagh halt losing streak with victory over Rainey 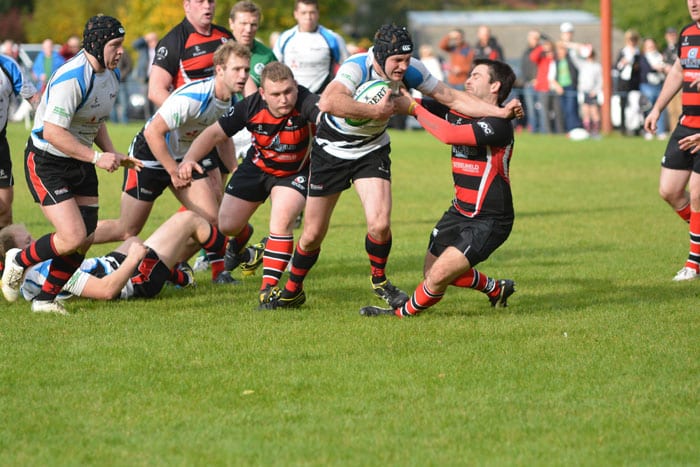 Armagh played their fifth game in the Ulster Bank All-Ireland League on Saturday afternoon when they entertained Rainey Old Boys at the Palace Grounds.

Having suffered three consecutive defeats in the league, the Armagh side were looking to bounce back at this early stage of the season and gain valuable league points.

The match kicked off in ideal conditions and immediately Armagh put pressure on the visitors. The Armagh forwards and backs combined through numerous phases and after only four minutes, flanker James Hanna scored to the left of the posts. Outhalf Johnny Pollock converted to give the home team an early 7-0 advantage.

Rainey responded and their backline looked sharp when in possession. A deliberate knock-on by the Armagh scrum half resulted in a yellow card but the kick at goal from Rainey was missed. The extra man did pay off when Rainey scored in the corner to make the score 7 – 5 with the conversion missed.

Full back Harry Boyd stepped into the scrum half role temporarily and Armagh went back on the offensive. Hooker Smyth had a storming run up the middle of the pitch and James Morton also was close to breaking through the Rainey defence. The pressure on Rainey paid off for the home team when centre Matthew Hooks held off several defenders to score under the posts. A conversion from Pollock gave Armagh a 14 – 5 lead with only fifteen minutes played.

Rainey missed two further penalties and were in trouble when Armagh scored their third try just before half time. Winger Josh Morton finished off a fine backline move in the corner and with the conversion missed, the half time break came with Armagh ahead 19 – 5.

After the re-start Armagh’s objective was the extra bonus point but Rainey were determined to strengthen their defence. Despite being pinned inside their own half for the majority of the second period they continued to hold firm and had several threatening breaks out of defence.

Josh Morton was close to a second try following a kick and chase on the left wing and Harry Boyd also came close to the crucial fourth try. The Armagh forwards also had a 5 yard scrum and pressure on the Rainey line was cleared by the visitors.

It was not until five minutes from full time that Armagh got the break-through they had been pushing for. Substitute winger Andrew Willis, burst through  from the halfway line and touched down under the posts for Pollock to convert. The final whistle went with the home team victorious, 29 points to 5.

The Armagh coaching staff were delighted with the overall team performance and a strong first half had set the foundations for an impressive win. Rainey’s coach, John Andrews, was unhappy with his team’s lack of discipline in giving away so many penalties and missing 11 kickable points in the first half.

The bonus point win has elevated Armagh up the league table and increased confidence ahead of their next match in two weeks time when they travel to Leinster to play MU Barnhall. James Morton forces his way through the Rainey defence