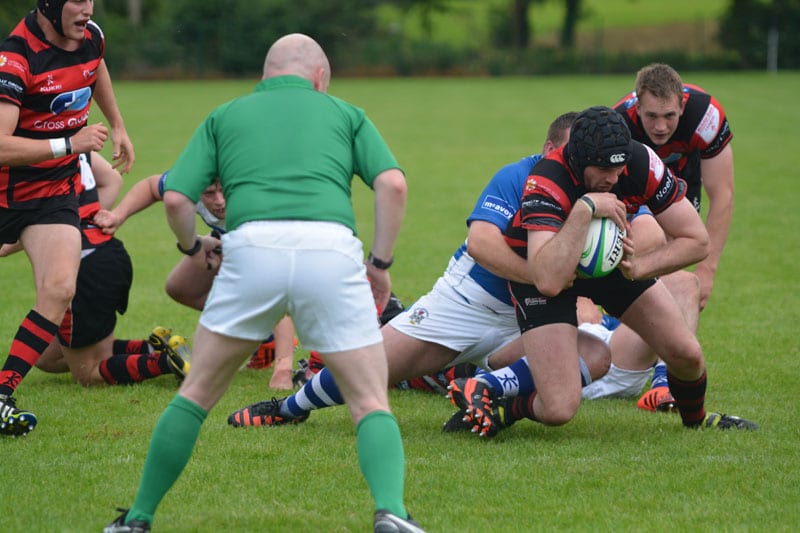 Armagh played their first game in the Ulster Bank All Ireland League of the new season on Saturday afternoon when they entertained Dungannon at the Palace Grounds.

The much-anticipated Ulster derby had generated a lot of interest in the build up to the match and the huge crowd were not to be disappointed in the close encounter that ensued.

Unfortunately the referee was to play a prominent role in the game awarding 39 penalties and issuing seven yellow
cards, all for technical offences.

Conditions were perfect for open rugby but light rain was forecast and after the deluge experienced on Friday night when Armagh second’s comfortably defeated Dungannon 2’s 22-3, a slight drizzle was not going to detract from the action on the field.

Immediately from the kick-off Armagh exerted the early pressure and the first 15 minutes were largely spent in the Dungannon 22.

James Morton made a clean 20 yard break from the middle of a ruck but the final try scoring pass went to ground.

Dungannon were defending well and Armagh’s first attempt at goal was missed by Matthew Steenson from 35 metres out.

On 15 minutes, Dungannon made their first visit to the Armagh half and outhalf Finlay chipped over the home defence for full back Armstrong to gather the ball and run in under the posts for the game’s opening try. The conversion put the visitors ahead 7-0 and a few minutes later the lead was stretched to 10-0 when Paul Armstrong was on target after Armagh were penalised for offside on their 22.

Armagh continued to try and break down the well-organised Dungannon defence and as half time approached, the visiting front row were penalised in front of their posts. This time Matthew Steenson was on target with the kick to reduce the deficit to 3-10.

The second half commenced with Armagh in determined mood and with two Dungannon players in the sin bin for rucking offences, a kick to touch led to Armagh’s Willie Martin forcing his way over for the first home try of the game.

Despite the conversion drifting wide, the 8-10 score brought Armagh back into contention.

Shortly after the re-start good interplay from the halfway line led to winger Andrew Willis scoring a fine try in the right corner. Again the conversion fell wide but with the score now at 13-10 Armagh were seen to play with new vigour.

Dungannon then exerted pressure and were rewarded for their efforts when Armstrong landed another penalty to tie the match at 13-13. Armagh then had a chance to retake the lead with another penalty and Harry Boyd put the home side ahead 16-13.

Not content with just the kicking duties. Harry Boyd then jinked his way over the line to score Armagh’s third try. His conversion, however fell wide but Armagh now had some breathing space at 21-13.

Dungannon, however, were not giving up and with two Armagh players in the sin bin, the home defence was stretched
and number 8, McMahon, scored in the right corner in injury time.

A super conversion brought the score to 21-20 but Armagh were able to close the match out as the referee finally brought an exciting match to an end.

This was a really hard-fought derby game, with the lead changing repeatedly and the home team were delighted to come out on top by the narrowest of margins.

Armagh Seconds played Dungannon seconds on Friday night in the junior derby prelude, with the senior teams meeting on Saturday.

The game was played in steady rain throughout and it was a credit to both teams that they made light of the conditions to play entertaining rugby.

The Armagh forwards won steady possession in the early stages with David Spratt and Kyle Faloon combining well at 9 and 10 to set the home backline in motion.

After several drives into the Dungannon 22, Matthew Campbell, broke through a tackle and then after making more ground, stretched over for a good try at the posts .

With the conversion by Kyle, the home team had an early 7-0 lead.

After Dungannon replied with a penalty, the Armagh forwards battled hard for possession through Sleator, Lutton and Captain Gareth McNeice.

After a ruck close to the line Spratt darted though untouched at the posts for a converted try, 14-3 to Armagh. The second half continued in the same vain with Armagh’s  backline eager for work.

Faloon added a penalty to increase the lead to 17-3,  however it wasn’t until late in the game that the move of the night led to a superb try in the corner.

With Con Oliver making good inroads into the visiting defence all evening, quick ruck ball to Faloon saw him pop the ball back inside for winger Luke Crozier to burst through the centre.

When tackled by the Dungannon fullback, he cleverly offloaded to Robbie Faloon who raced over at the corner flag.

With the final score of 22-3 to Armagh, the hard work on the training pitch is evident as fitness levels were impressive considering this was the team’s first game of the season.