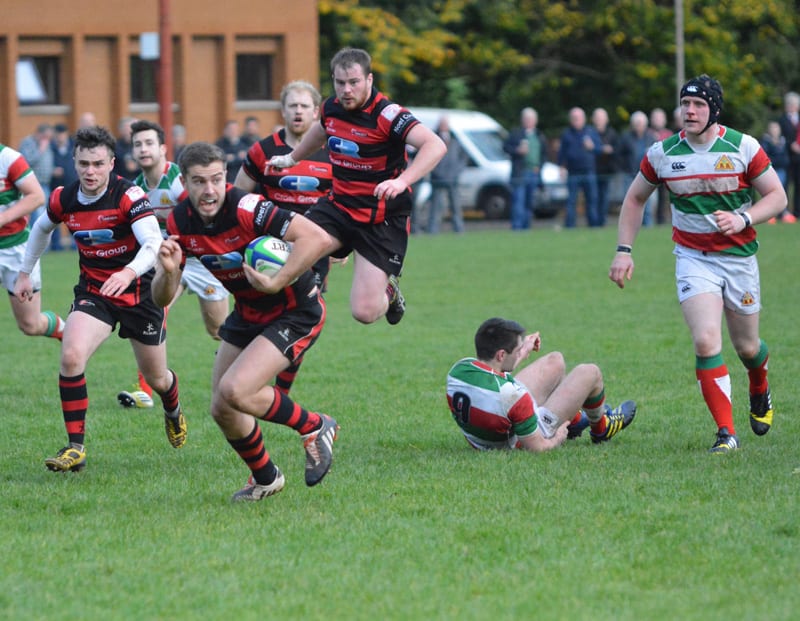 City of Armagh played their seventh game in their 2015-16 Ulster Bank All-Ireland League campaign when they entertained Dublin side, Bective Rangers, at the Palace Grounds on Saturday.

Having secured an away win in their previous match against MU Barnhall the Armagh side were keen to keep a winning momentum going.

The playing conditions were near to ideal. Despite heavy rain on Saturday morning, the playing surface was still firm.

Armagh kicked-off and the home supporters were stunned when the visitors scored after 60 seconds. A careless pass into midfield was intercepted on the half way line and a Bective centre touched down under the posts for a simple conversion to be kicked.

Straight from the restart, Armagh responded positively and James Morton scored after a powerful drive from the forwards. Johnny Pollock converted to level the score at 7-7, all within three minutes of the match starting.

Armagh looked lively in attack and winger, Josh Morton, made a characteristic break down the left wing only to be foiled from scoring by a forward pass. The game was being played at a frenetic pace with the home team enjoying ample possession.

Neil Faloon made a fine 40 metre break down the centre of the field when he picked up from the base of a ruck but the chance went begging due to a lack of support. A rare visit to the Armagh 22 led to a penalty for Bective which was converted to put the visitors 7-10 ahead.

Midway through the first half, some poor marking from Armagh was exploited by the Bective right winger who ghosted past three defenders to score a converted try and the visitors now led 7 – 17.

As half time approached Armagh looked to turn their territorial advantage into points. The Armagh set piece was sound with the home team dominant in the scrum. Pressure in the Bective 22 led to a 5 yard scrum and after warning the visitors, a penalty try was awarded to Armagh. A successful conversion from outhalf Pollock brought the halftime score to 14-17.

The second half began with Armagh continuing to dominate the visitors and pinning them in their own half of the pitch. Pressure from the home forwards led to a scrum near the Bective line and as Armagh went for the pushover, Bective transgressed and the referee awarded a second penalty try. The conversion put the home side ahead for the first time in the game at 24-17. The home supporters were now confident the bonus point would arrive with thirty minutes still on the clock

Despite the Bective defence visibly tiring and a couple of yellow cards reducing the visitors to 13 men on one occasion, the visitor’s line held firm.

As the match came to a close, it was Bective who suddenly looked like they might score a breakaway try and level the scoreline. The final whistle however went with no further score and Armagh had their third successive win, 24-17.

After the match, the Armagh coaching staff reported their disappointment with the overall team performance. In a very tight league the lost bonus point could be crucial at the end of the season. The coaches will be looking to iron out some issues at training this week.

Armagh’s next fixture is on 21st November when they entertain Ballymena in the Ulster Senior League at the Palace Grounds.

Armagh’s Captain, Neil Faloon, made a fine 40 metre break in the first half

Armagh’s Stephen Morton takes an off-load from his brother, James, during Saturday’s game with Bective rangers

Armagh Rugby Club’s President presents a gift to stalwart volunteer, Wendal Magwood, in acknowledgement of his raising over £40,000 at the Palace Grounds gate

Armagh Seconds cruise at the seaside.

Armagh seconds played Bangor seconds at Uprichard Park on Saturday on a very wet pitch but made light of the conditions to record a resounding win.

With a much changed side from the previous week, Armagh kicked off playing up the slope and into the wind. With the forwards relishing the task, numerous early carries led to Paul Campbell receiving a short pass from Andrew Knipe which ended with a try midway out on the left.

The blustery conditions were to make kicking for goal a lottery throughout the game. Armagh 5, Bangor 0.

John Fletcher was stopped short of the line after a 30 metre burst, however Knipe added two penalties for home infringements to stretch the lead to 11-0.

Bangor tried to use the wind for territorial advantage, however Armagh’s back three of Thompson, Girvan and Straghan easily dealt with any probing kicks.

Campbell had another run up the middle with ended with the ball being moved through quick hands by Morton to Robert Straghan who skipped around the last defender to score in the corner, 16-0 to Armagh.

Bangor replied when they touched down for a good unconverted  try in the corner to leave the half time score at 16-5.

On the resumption, Bangor had clearly changed their tactics and kept the ball tight with their forwards picking and driving into Armagh’s 22.

Stout defence and a clearance kick from Knipe eventually lifted the siege. Some clever box kicks from Harry Doyle kept play in the Bangor half and with the forwards once again on the front foot, Armagh had a lineout on the home 22.

The lineouts had worked well all day with Morton and Michael Rolston winning their share of the ball. With the ball secured, Matty Allen slipped the ball to Campbell for him to get his second try to the right of the posts, 21-5.

Further scores from forward drives were added by Brian Bassett and Morton to leave the final score Armagh 31 Bangor 5.

This was a good performance from the side with Zac Kneebone showing up well on his return to action.