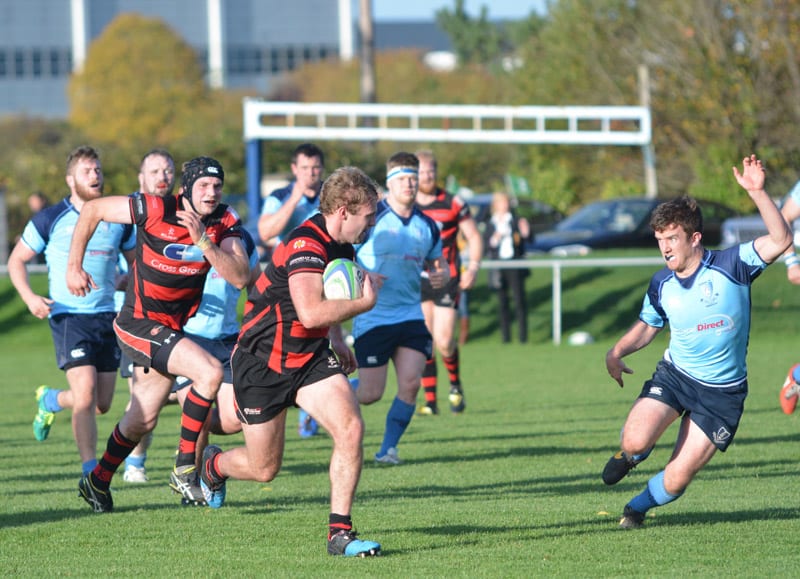 With a week’s rest behind them, City of Armagh returned to All-Ireland league action with a difficult trip to MU Barnhall in Kildare.

Armagh’s last visit in the 2011-12 season had resulted in a heavy defeat for the visitors and a stern test lay ahead.

The Armagh team however, travelled with renewed confidence on the back of their recent bonus point victory at home to Rainey RFC.

Conditions for the match were ideal for open rugby with brilliant sunshine and no wind to speak of. Within four minutes of Barnhall kicking-off, the home side were penalised for crossing but on this occasion Johnny Pollock’s kick brushed the outside of the post.

Shortly after this miss, however, Pollock made amends by landing another penalty to open the scoring 0-3 in Armagh’s favour.

All-Ireland League Division 2B as it stands

The Barnhall loose-head prop was then yellow-carded for entering a ruck improperly but despite this disadvantage the home team managed to score a try when their centre, Quinn, broke through the Armagh defence.

The conversion was on target and Armagh found themselves 7-3 to the deficit.

A further penalty put the home team 10-3 ahead and this was not the start the visitors would have wanted.

Armagh continued to play an attacking game but due to numerous handling errors they failed to put points on the scoreboard.

Eventually the Armagh pressure was rewarded when Matthew Hooks forced his way through the centre and stretched over the line to score a fine try. Pollock was on target with the conversion to bring the score to 10-10 at the halftime break.

Armagh started the second half in determined fashion and after a few minutes, James Morton picked a loose ball up from the rear of a ruck and forced his way over to score just left of the posts. Again Pollock’s kicking was on form to see Armagh now ahead 10-17.

Centre Hooks was then yellow carded for tackling a player in the air and Barnhall was able to take advantage of the extra man when their full-back touched down in the left corner to narrow the scoreline to 15-17.

Armagh responded to this set back and team captain, Niell Faloon forced his way over to score at the same spot as James Morton. Again Pollock converted, stretching the visitor’s lead to 15-24.

Matthew Wright, Peter Elliott, James Morton and Neill Faloon all had excellent breaks in the last quarter as Armagh pushed for a fourth try. Winger Josh Morton then intercepted a loose pass just inside his own half and took off to score the bonus point try in the left corner. The final whistle ended the game with Armagh delighted winners by a score of 15 – 29.

The Barnhall coach, Dean Hakaraia, praised the Armagh side for their strong performance especially their ability to string their phases of play together consistently. Armagh’s coaching team were pleased to have gained two consecutive bonus point wins which elevated the team to third place in the league table.

Armagh’s next match is against Dublin side, Bective Rangers next Saturday at the Palace Grounds.