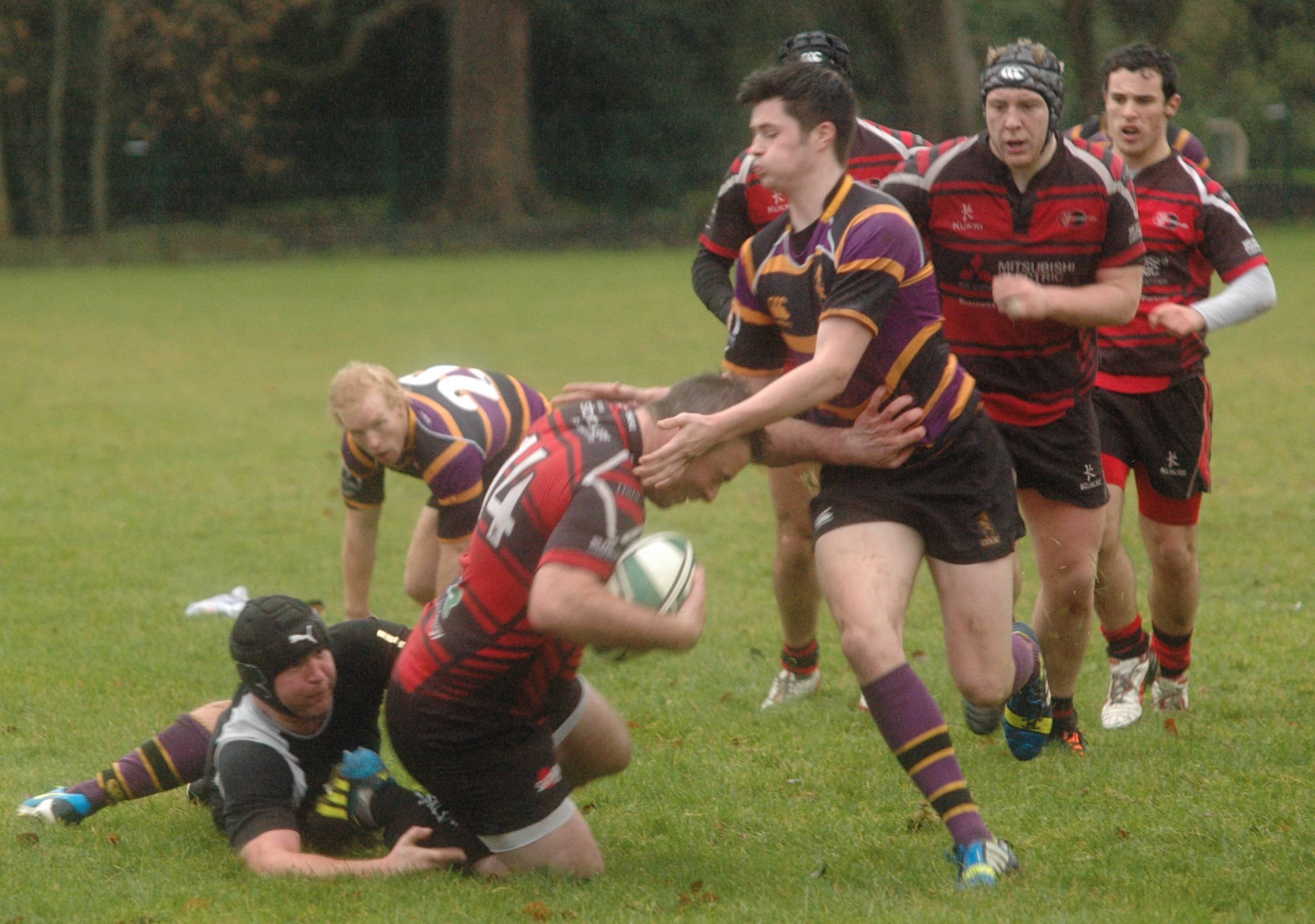 Picture the situation; a gusting wind from the Palace end accompanied with driving rain saw Instonians take advantage with the wind on their backs from the kick-off.

The rugby pundits tipped Armagh to take a home win following last Saturday’s win against Sligo. Instonians, on the other hand, started off the game with a style of open, fast rugby usually provided from an Armagh team.

Five minutes into the game Armagh were caught entering a ruck improperly and the Instonians Kicker, Richard McCarthy quickly notched the first of three first half penalties. Fifteen minutes play and Armagh hadn’t got into the Instonians half yet. Phillip Fletcher discusses the finer points of scrummaging with
the referee

To add insult to Armagh’s problems the Instonians flanker scored a try just right of the posts which, again, the kick was accurate. Now Armagh were in real problems with the score at 0-16 at half time they had a very big hill to climb in the second half, albeit with the wind at their backs after the break.

From the restart Armagh took the ball right to the Inst. line only to be turned over. An indication of the Instonians commitment was illustrated when their out-half was forced to leave the field shortly followed when two of their forwards collided with a clash of heads.

Armagh’s coach reshuffled the backs to bring Richard Reaney into out-half position and let Johnny Allen loose in the centre which appeared to bring new life into the side. Shortly after this Johnny scored a lovely try which Reaney kicked for another two points. With less than five minutes play left Stephen Morton forced his way over for try no. 2.

Again the conversion was on target to put the score up to 14-16. Through a display of resolve, fitness, and sheer bloody mindedness Armagh suddenly came alive but Instonians still battled on bravely. Literally, in the last minute of the game Armagh took possession inside their own ’22’ and proceeded to pick and drive their laboriously up the field. They ha got just inside the Inst. half when the referee penalized an Inst. player for entering a ruck improperly.

Now this penalty kick was to be the last kick of the game and was well to the right just inside the Inst. half with a swirling wind. No pressure on Richard Reaney or what! As the kick went over there was a mixture of emotions seldom experienced at a sporting event.

Armagh had plucked a result from a game all but lost to a rampant Instonians side. Instonians had lost a game they had controlled for all but five minutes. Is it any wonder rugby is now the game growing in stature that it is?

Armagh meet Instonians again this season when they play in the All-Ireland League, away. This January fixture promises to be one not to miss. Next Saturday sees Ards travel to the Palace Grounds to play in the Ulster Senior League.